Although The Help is based on a book, and that book is based on the authors actually experiences, politically this could just be considered another “feel good white people” movie. You know. The kind that deals with racism and stuff, but still is a story about white people dealing with racism, making it more appealing to “average movie goers”.

But if we ignore that pretty obvious thing about this movie, then just like The Blind Side, you will find a very awesome movie. 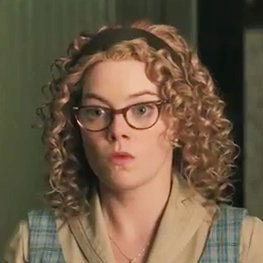 And Emma Stone playing her version of nerdy 50s girl.

The Help is about Emma Stone, recently graduated from College and wanting to be a working woman! Or at least an Author, but she doesn’t know what to write about. She does get a job at the local paper, and takes over the “cleaning advice” column, that I guess used to exist, which is crazy. She is also distraught because the “help” that raised her from baby through high school is no longer there when she returned from College, and isn’t getting a straight answer as to why.

For some reason, she thinks it will be a good idea to tell the stories of the different maids around, and make a book of it. After all, their story has never been told, and they might have some interesting ones! College has taught her to think all races are equal. College is a good thing!

Viola Davis is a middle-aged maid who has recently lost her son, but has to raise other peoples white children. Octavia Spencer is a good cook, which keeps her employed, because she also has an attitude. There is also Bryce Dallas Howard, local high society wife, who plays the movie’s major villain. At the beginning, she is trying to pass a bill requiring all “help” to use a different toilet, because different colored people have different diseases.

Oh yeah, and Allison Janney (or CJ from The West Wing) plays Emma’s mother, who holds the secret to the “missing help” and also of course hates her daughter being all educmacated.

I am sure I have said something by now that I shouldn’t have.

Although the plights of black women as hired housekeepers is probably downplayed in this movie (nothing too serious happens), it is probably good that some of their story was told. I know the “Association of Black Women Historians” finds the film to downplay it all too much, and thus not endorse it all. But hey, I say you gotta give a higher grade for effort.

I’d rather assume this movie is a fictional account of true stories from back then, and as a story it is very interesting. All the characters you can probably relate too and feel their pain. The only movie subplot that seemed force was Emma’s relationship with some male suitor, which by the end is kind of pointless anyways. The actresses in this film are all great, even the “stuck up racist bitch”.

I am sure there are probably complaints in terms of accents for this too, but that is easily ignored by me. I wish it went a little longer myself, to find out what happens with Viola Davis’ character. Similarly, Octavia Spencer’s character has a happy ending, but when actually looking at it, it still kind of sucks.

Since this movie doesn’t end with the end of segregation, you might want to follow it up with Hairspray, in case you don’t know how this historic adventure ends.