Animated films can take a long time to make. It takes years to get all of the CGI right, and pretty. It does not take a lot of time to record dialogue, or figure out the plot (Unless you are The Good Dinosaur). But all the technical work making sure every frame is wonderful and all the characters are as you had hoped. Years and hundreds of people at work.

Technically it only takes years if you care about the final product. That is why we had Planes and Planes: Fire & Rescue less than a year apart. The animators didn’t care.

There was a five year gap between Kung Fu Panda 2 and Kung Fu Panda 3. And you know that is not because the voice actors were too busy for lines. Kung Fu Panda 2 in 2011 was the prettiest film of all the CGI movies. Prettier than Rango and Puss In Boots. If they wanted to not just recipricate the second movie but surpass it, you can bet your ass it would take them years of work.

I am rambling. All I am trying to say is I expect this film to shit rainbows and make my eyes bleed in wonder. A sweet villain would also be delightful.

Creepy and promising! Me likey.

As we know from the end of 2, there is a secret panda village somewhere and Po (Jack Black) doesn’t know about it. He won’t care about it until a mysterious panda, Li (Bryan Cranston) shows up to the valley. He is looking for his lost son. Could it be?! Yes, yes it could be.

Great news! Now Po can show his dad all the cool dragon warrior stuff, and make his Foster Dad, Mr. Ping (James Hong) feel incredibly sad and jealous. Also Master Shifu (Dustin Hoffman) plans on retiring so he can focus on himself and find his Chi to do even better Kung Fu, leaving Po in charge of training the five (Angelina Jolie, Seth Rogen, Lucy Liu, David Cross, Jackie Chan). But he can’t teach.

Even worse? Well, Kai (J.K. Simmons) has escaped from the Spirit Realm! Who? He used to be a friend of Master Oogway (Randall Duk Kim) 500 years ago, even saved his life! But he got jealous of Oogway when he was taught to harness Chi from the mystical Panda village and wanted the power for his own, so he had to be put down in a jealous fury. Well, he eventually figured out how to steal Chi in the spirit realm, defeating all former masters and now he is back to the real world to defeat any and all would be challengers.

Jeez. Now Po has to learn Chi to defeat Kai. But it took Oogway 30 years! And Shifu can’t! Time for Po to go to his homeland. To determine how he can be the most Panda he can be, to learn what he has been missing all his life. To really become the Dragon Warrior. 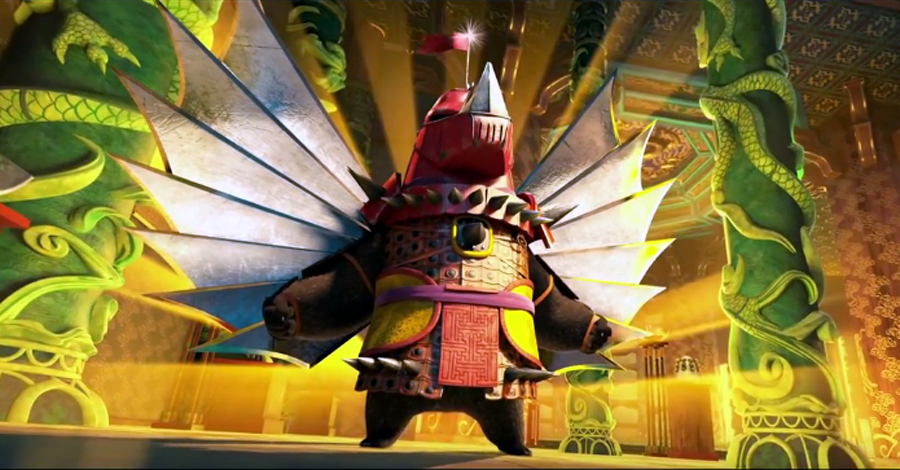 And of course this rhino panda bird metal hybrid warrior! Don’t forget about him!

This part of the review is actually really hard to write. How many times can I say how beautiful this movie is? I don’t want to look in a thesaurus but I believe everything I say about the CGI and art style will just sound repetitive. Gorgeous, detailed, beautiful, wonderful and wunderbar, eye orgasmic. The best part that this Kung Fu movie is animated is they can show amazing fight scenes and nothing gets lost to blur or shaky camera. We can see every punch and kick. Every fantastic movement. And it is awe inspiring. Just like the previous films, the entire thing isn’t just CGI, they have other art styles to show within back stories which give it more traditional feels.

Fuck its so pretty.

Okay. Sorry. I will stop.

Kung Fu Panda 3 is sadly not perfect. A lot of the early film is wasted. Part of the charm of sequels for action films like this is that we don’t have to waste our time with origin stories. But this film has us sit through Po being bad at teaching, then he is has to do the long Panda training. The Panda training in particular, discovering his family and friends, just takes so much time and makes me lose interest in Po. The twists that show up during the village are also quite obvious, so we don’t even get the benefit of a nice shock.

The villain is awesome, although we don’t get to see enough of him doing bad things. The spirit realm was awesome and allowed the film to add more magical components to the franchise. Making “Chi” the big new thing feels a bit strange. I think KFP2 added that he needed Inner Peace and the Chi concept just feels like the same thing again. I don’t want each film to be Po learning something bigger to defeat a new threat. That isn’t original. Although I don’t know if there will be any more films after this one, given the ending.