Every year, the world is seemingly blown away by a new art-house horror film that really drives into our subconcious. Every year there are arguments about this new art-house film actually being a horror film, or some sort of thriller drama instead. And every year, I write a review of one of these films, and have to talk about the films of the previous years that fit that bill.

But I will save you some time. Last year we had The Witch and I LOVED The Witch. It felt evil to the core, it felt authentic, and it drove the genre to new places.

And now, It Comes At Night is hoping to be the new art-house horror that everyone is talking about. So what do you think? Do you think it will truly be a horror, or more of a dramatic thriller? Do you think it will have a lot of critical acclaim but no one will watch it? Will the meaning behind the whole thing cause internet debates for a long time? 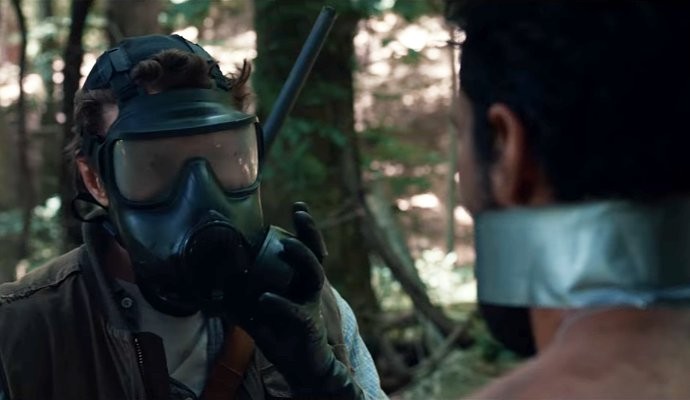 Ah cool, a mask man and some duct tape. Horror staples, for sure.

Set in a year that is like our own, in the future or the past, lives a family, on the edge of disaster. The world is different now, there isn’t any technology that is not battery powered. And the family is about to bury the grandfather (David Pendleton). Paul (Joel Edgerton), his wife Sarah (Carmen Ejogo), and their 17 year old son Travis (Kelvin Harrison Jr.) are survivors in a world with not a lot of people. Their grandfather has the disease, so he has to be put down, burned, and buried to protect their lives.

They live in a boarded up house in the woods with a lot of strict rules, and their dog, Stanley. But soon after the death, a stranger comes to their door in the middle of the night. His name is Will (Christopher Abbott), who claims he was only doing it thinking the home was abandoned. He needs water for his wife (Riley Keough) and child (Griffin Robert Faulkner), who are many miles away, waiting for his return. And Will says they have food, animals for eggs and milk, to trade for water.

Or it is all a lie, and he wants to kill them. Who knows.

Sarah wants to bring the family to their house, have more people to defend the place, live in harmony. It is a big trust exercise. What with the virus, the creepiness at night time, and people who just make their world a brutal place to live in.

Travis just wants to stop having nightmares and waking up in the middle of the night.

Sometimes they call the entrance to their house L Street.

Oh I feel so terrible, so dead, on the inside. I rarely due this, but here is an exact quote for what I put on my comment card. They have us fill out quick thoughts so the studios can get initial reactions before longer reviews come out.

“I feel so empty inside 🙁
Great acting, great story, and a never ending sense of dread. Fuck”

And that is still how I feel, days later writing this review. Are there scary moments? Yeah, a few. But most of the horror comes from a personal level, deep deep down inside of you. You know what is PROBABLY going to happen, so there isn’t a lot of surprises. But still, to watch it unfold in front of you just builds the tension and of course, the dread.

Dread is this movie’s official review word. If you don’t want to feel dread for prolonged periods of times, then don’t watch this movie. If you want an emotional experience that will rock you to your core? Then watch It Comes At Night.