You know what we need? More beautiful and glorious independent sci-fi film. I think Arrival counted as indie. Maybe it wasn’t. It felt indie at least.

And Doors, at least by cover art and plot, looks like something that could be confused with Arrival.

So I will go in expecting Arrival level quality, or else I riot and walk.

Arrival had some kids in it, sure.

Doors is actually a sci-fi movie with four related yet independent parts (the last one is very short). It involves suddenly these black alien entities that appear all around the world in random places. They get nicknamed as doors (even though they don’t look like doors), but you can walk into them and go somewhere. And they also talk to some people.

The first segment, Lockdown, is when they first arrive, and centers on some students taking a test. That one stars Kathy Khanh, Julianne Collins, Aric Floyd, Rory Anne Dahl, Christopher Black, and Saman Kesh.

Then a few weeks later, we have the Knockers segment, named after people who go into the doors to investigate. They have a limited amount of time to gather any intel to report back, before being trapped or losing their own minds. This one features Josh Peck and Lina Esco.

The third segment, 100 or so day after the doors, we focus on Jamal, a lone scientist who thinks he has figured out how to actual communicate with the doors. Hearing them and letting them hear him. Starring Kyp Malone, Kristina Lear, Bira Vanara, and Wilson Bethel.

The last segment is a quick zoom interview, with a conspiracy DJ and a famous alien scientist, featuring Darius Levanté. 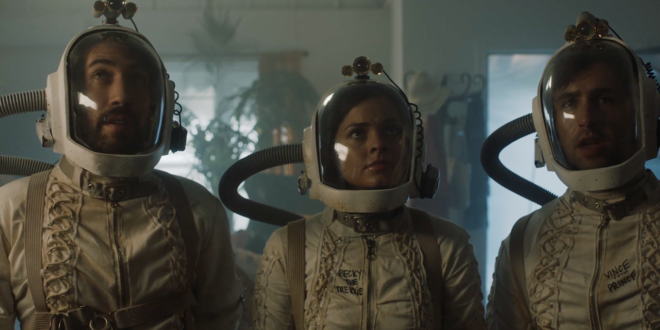 Even got fun containment costumes. Will it make me cry?

Doors was nothing like Arrival, of course, and I only have myself to blame for that. With four different stories though, unfortunately, it would require most of them to be good -awesome for the movie to be worth it. From my count we have two average stories, and two below average stories, which is a huge disappointment.

The first two were the okay ones. In the school, it had a couple nice moments, but that was about it. It kept up the mystery which is nice. The second story, with the knockers, had the potential to be fun. It had a lot of mind fuckery going on inside the doors. But mind fuckery for mind fuckery’s sake is not worth it if there is no real purpose behind it. I mean, maybe the purpose is evil aliens. It however still needs something to give it meaning or reason and it chooses not to.

What I am saying is, I can’t overall like it, if I don’t eventually find out a reason for what was going on. And they don’t give a good reason, besides Alien space magic tech and that is it, which is a sort of boring answer.

The last two stories? Well, one didn’t seem interesting. It had a guy be able to communicate back and forth with a door for others to hear. But we also already knew they could communicate in some way. Was that more interesting? Nope. More just silly door shenanigans. And the last one felt like it wanted to be a scene out of a Paranormal  Activity movie.