To be gifted in academia, it can mean a lot of things. It does NOT, however, have to mean you are immediately great at math or science. You can be gifted at drawing, music, analytical thinking, synesthesia, you name it. It is a common misconception that gifted students have to be good at common school subjects.

When I was in NC, it was called AG then AIG, Academically Intellectually Gifted, but apparently in Texas it is just GT, for Gifted and Talented. The same key word is there, and it is supposed to give you a harder program to really test your limits and get more out of your education. For the most part, it is really just slightly harder material and doesn’t do a lot of training.

Being a gifted student and now teaching gifted students, I was very interested with what the hell the movie Gifted would be about. Would it be accurate? Would it show the appropriate struggles? Would the main character wear glasses? 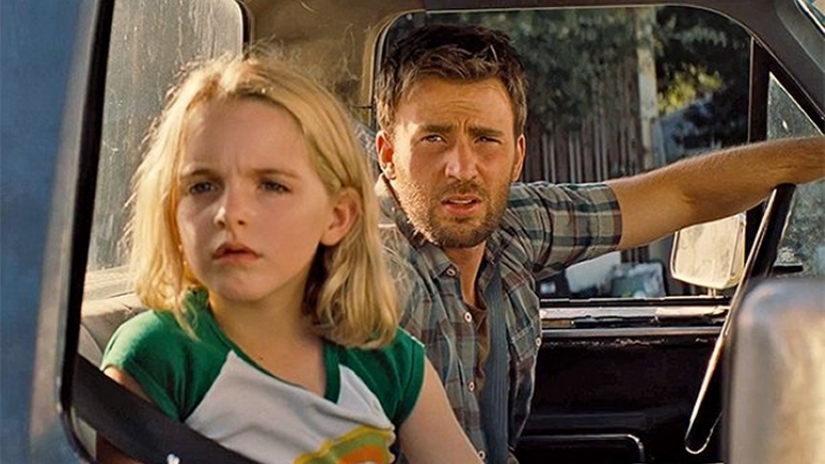 Our story is about Mary Adler (Mckenna Grace). She is 7 years old and about to enter the first grade. She doesn’t want to go, though, because she has been living with her Uncle Frank (Chris Evans) most of her life and she has been home schooled. Not fancy tutors, just good old fashioned books and practice. Sure they live in a small trailer, in a poor area, with Frank working as a boat repairman, but they are happy.

But she doesn’t want to go into a regular school. It will be too slow for her! And when she does advanced multiplication in her head to her new teacher, Ms. Stevenson (Jenny Slate), they know something is up.

Turns out she is the daughter of Pat Golding (Julie Ann Emery), a very famous young mathematician, who was close to solving the Navier–Stokes equations. It is part of the Millennium Prize Problems (Not Yu-Gi-Oh related), a series of problems that will help revolutionize math if anyone ever can prove them. And Pat killed herself when Mary was 6 months old, leaving her in Frank’s house.

But it turns out that Franks family is kind of crazy. Notably, his mom (Lindsay Duncan), who attempts to gain custody of Mary once she finds out how gifted she is. Frank doesn’t want to put her in a fancy academy school for high level training, he wants her to grow up normal, with friends her age. And thus, a nice legal battle is actually the main focus of the film. Woo, lawyers!

And Octavia Spencer is in here too, of course, as wise next door neighbor and friend.

Now picture the lady who starred in Obvious Child as an elementary school teacher. Yeah, I can’t either.

Gifted is okay, in almost every front. The acting, the story, the feels. I only cried once, which is surprising, given it being about a dad like figure with a young daughter. There was an incredibly cute scene where the girl was having a crisis, thinking that she was never wanted by anyone in her family and her mom, so Frank took her to a hospital to see baby announcements post births. To show happy families and to relate how it made them feel as well. It was touching and powerful.

But this film isn’t great at the same time.

We have handfuls of math problem montages, close ups of symbols and numbers that I guess most people won’t understand, close up of the girl’s face, and back and forth, with some nice chipper music. The worst was when she was doing an advanced math packet in her first grade class. Because that montage included Jenny Slate looking longingly at her while she sat at her desk.

And it still had some nice jokes though. Jokes about math teachers and beards. Jokes about how less civilized people will use the word irregardless. Those cracked me up, which made the movie a bit more bearable.

Gifted is a relatively simple film about an extraordinary, fictional character. Watching a first graded do differential equations isn’t exciting, because this is a movie and the actress could be doing anything. In real life, if this was a real story, it would be amazing. Oh well!