Ah, another re-imagining. I think the last one recently was Jack the Giant Slayer, but I probably forgot a few other ones recently. This time, Maleficent, we are tackling the Sleeping Beauty tale. Instead of just telling the story a different way, we are getting it from Maleficent’s point of view.

So, at this point, the movie could go two directions. They could show us that Maleficent was really a good/misunderstood character (which is hard, being one of the more evil Disney villains ever), like what Wicked did, or they could give us a movie about a bad ass mother, who don’t take no crap off of nobody.

Do we get the awesome force of evil doing awesome things? Hell no, this is a Disney related property. You are getting a PG movie, Maleficent won’t be evil, tables will be turned. I mean. Wicked did it. Of course it is going the Wicked route.

But now there are some changes.

This film begins when Maleficent is but a young girl. She is also a fairy. Some dumb war between the fairy kingdom and human kingdom going down. She meets a human boy, finds him sweet, they frolic, he leaves to do human things and they grow old apart.

Now, Maleficent (Angelina Jolie) is an adult fairy, protector of the forest because she is better than the other fairies. The human kingdom is at war now with the magic land. Maleficent pisses some people off. Long story short, a metaphor that strongly resembles rape occurs, and her long lost child hood friend, is now the new King Stefan (Sharlto Copley).

So that curse thing happens, basically just like in Sleeping Beauty. But now, instead of Maleficent searching for Aurora (Elle Fanning) for sixteen years, she finds her like right away and becomes her silent guardian, protecting her from harm. Why? Not really sure.

Then a whole bunch of events happen, nothing at all like the events in Sleeping Beauty, and everyone lives happily ever after.

We have the three fairies again, but they have different names now, for some reason. They are now Thistletwit (Juno Temple), Knotgrass (Imelda Staunton), and Flittle (Lesley Manville). We also have Sam Riley as the raven boy thing and Brenton Thwaites as Prince Phillip. 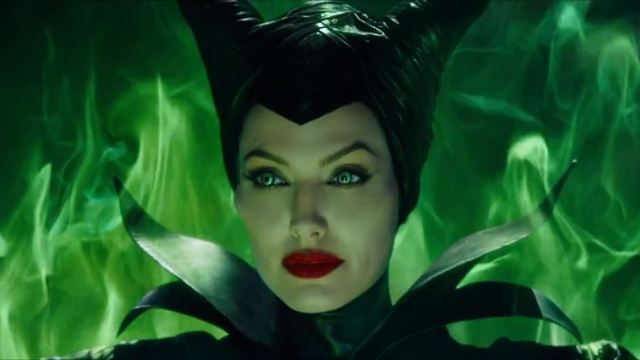 Oooh, there is the Maleficent we know. Even if it is for just a short while.

Here is one difference between Wicked and Maleficent. Wicked, more or less, took the aspects of the original story, kept them all basically the same, and added in a lot of new material and made it great. Maleficent had one aspect of the original story the same (the baby girl scene), then changed everything else about Sleeping Beauty and called it a day.

If it was a “misunderstood villain” story and they actually did it in the context of the original story? Great. If they decide that she is misunderstood because someone told the story wrong? Boring and pathetic almost.

“But movie reviewer! You don’t take the source into context!” Well, that is true. Unless they bring the source material into context for me. Thankfully this movie includes in the actual film one of my least favorite things of the last few years, telling me the story I heard was wrong and this is the real way. Or that I don’t know the truth. It is one of the worst things to hear, and it just keeps happening.

Maleficent had some cool special effects. Her awesome magic powers were vague with what she could actually do. Sometimes really awesome creation magic and spells? Cool! Destruction? Yeah! But that was like, only once, all used for the trailer. Her magic became something that could do basically anything for her, unless it would have made the plot lame. The movie isn’t really dark like the trailer suggests. The middle chunk of the movie is just Maleficent standing around, peering behind bushes while the theater sleeps.

There is a lot wrong with this film, in my eyes. They took a beloved villain and made her a metaphorical rape victim. They made her really powerful, with out displaying any of this power. They made her wear a catwoman like jump suit at one point.

I think that last line really makes my points clear.