The Watch had a lot of negative press surrounding it. Unfortunately its first previews started to appear right before the Trayvon Martin shooting down in Florida. Which was done of course by someone on a Neighborhood Watch patrol. Bad timing indeed!

But really this has very little to do with the plot of the movie. Because this movie is dick jokes and aliens. 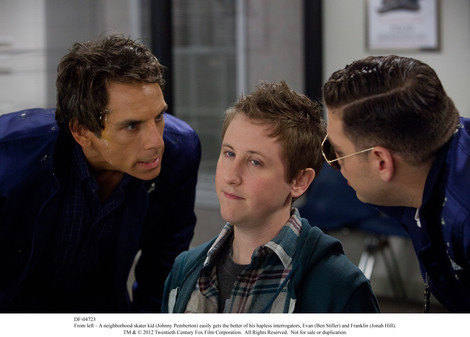 Lets count how many dicks and aliens you see in this scene.

Evan (Ben Stiller) is a normal middle aged man living in Suburbia in Ohio. He founds a lot of clubs and cares for his community. But bad things happen. Very bad things. Like the security guard at Cotsco, HIS STORE, was brutally murdered and had his skin shaved off. Pretty damn gross. He realizes the cops in the town are pretty incompetent. There are only eight, and the main two hate him (Will Forte and Mel Rodriguez). Plus they think he is a suspect, since he had the ability to get into the store!

Well damn. So Evan founds the Neighborhood Watch while his wife (Rosemarie DeWitt) is away for a weekend, but interest is limited. He gets Bob (Vince Vaughn) a rich man who loves capitalism, but has to raise his daughter (Erin Moriarty) mostly alone because his wife travels for business, and really just wants some nice man friends. There is also Franklin (Jonah Hill) who now lives with his mom, wanted to be a cop, but failed all the tests, including the mental one. And Jamarcus (Richard Ayoade) who also really wants to just hang out/fit in after a divorce, and has an Asian fetish.

This rag tag group of people are forced to do mundane things, until…Evan hits something with his car. And it has green slime! And there is a weird ball that explodes whatever they point it at, assuming they actually finger all the holes. Turns out it is Alien technology, and they might be dealing with a giant alien invasion in their small town Ohio!

I’m sure the creepy skin talking neighbor (Doug Jones) has nothing to do with it. Also Nicholas Braun is in this movie, as guy trying to get with Bob’s daughter. So you know he is going to get fucked up as well. And why does Evan not want to have sex with his own wife? Damn it, Evan. 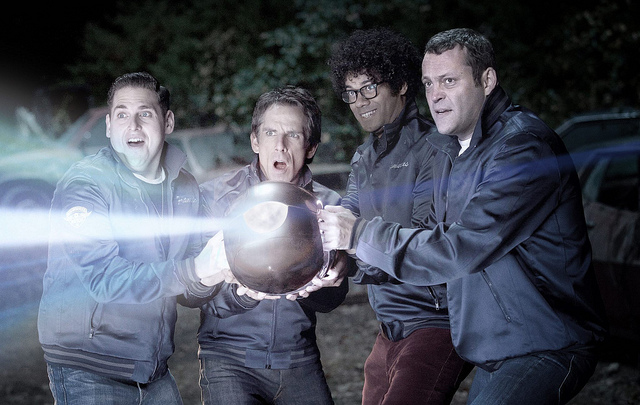 Oh, so he lets out his steam another way? Do go on.

Honestly, I’d say that 85% of the humor in this movie was about the male genetalia. It just kept coming up, and came quite frequently. The other 15% would be spread out between some racial/ethnic humor, bromance, and then miscellaneous. But wow.

I didn’t think the plot was that bad. But a movie needs to penalized if it strikes the same funny chord as its go to mechanic. Thankfully the dick jokes were actually, mostly, well connected. But at the same time, it got quite annoying.

Vaughn played a character he always does, and Stiller basically the same. I would say Ayoade and Hill brought something different, since at least with Ayoade he hasn’t really been in an American film yet, and Hill got to play a pretty psychotic military character.

So sure, a bit disappointing, but thankfully it wasn’t complete trash.