Movies in 2014 brought us some incredibly new and wonderful experiences. Boyhood took 12 years to film, doing a little bit each year to watch the actors grow old. Birdman was edited in a fine way to make it seem like just one long continuous shot. Both fantastic films, my 1 and 2 from the year.

But there was another movie that was unique last year that interested me. The Disappearance Of Eleanor Rigby. On its own, it doesn’t seem like that innovative of a film. However, it is collectively three films in one.

On the surface it is just about a relationship. Specifically, the three versions are called Him, Her, and Them. Him is the plot from mainly the guy’s point of view and Her is the girl’s point of view. Them is a more typically told story, telling bits and pieces of their sides and is a much more standard film.

And I wanted to see it all of 2014. I wanted to watch it as soon as it hit Blu-Ray. It has been on Netflix for months, all three parts! Welcome to Day 3 of my Fucking Finally week. 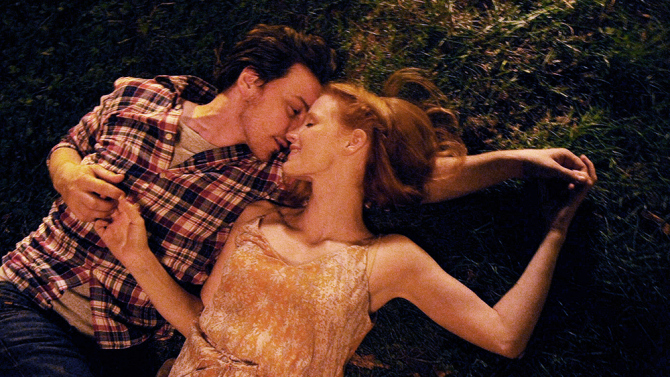 Conor (James McAvoy) and Eleanor (Jessica Chastain) have had a long relationship. They even married! Serious stuff. But no one would describe their lives as remarkable. Eleanor came from an academic family, but left her PhD program in Anthropology, when she got pregnant. Conor is the son of a restaurant God in NYC, who also has bad relationships, and is now attempting to run his own restaurant without his dad’s help.

But then one of the worst things happen. They lost their baby boy, really young. Their grief came in different ways, driving a wedge between them. After a few months, Eleanor wants to take a brake from their relationship, frustrated where things are going, and that is really where our story begins.

In Him, we mostly get to see Conor flailing about trying to deal with his emotions by repressing them like a motherfucker. They still come out in bursts, like when he has attacked unruly customers. His best friend and chef (Bill Hader) is even getting sick of his shit.

Conor sort of starts to stalk Eleanor a little bit as well, following her around but never having the courage to talk to her until he resorts back to a kid in middle school and passes her a note, quite creepily. His story also features Ciaran Hinds as his father, and Nina Arianda as an employee who has feelings for him. 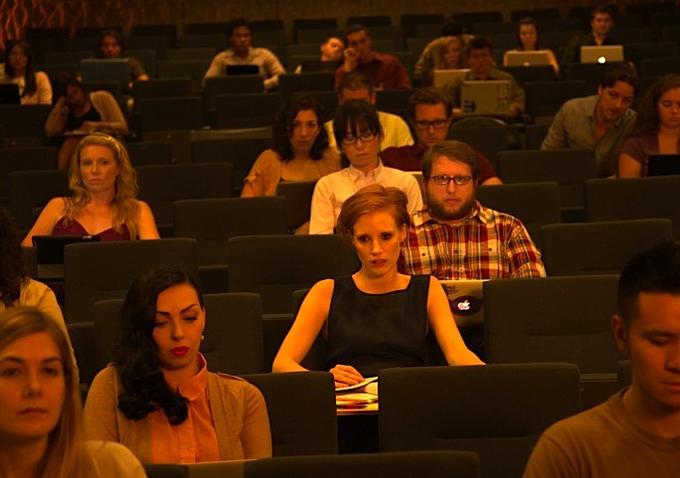 Then comes stalking after heartbreak and sadness…

In Her, we don’t even see Conor for the until the awkward scene above. James McAvoy is barely in this film and it is definitely all about Eleanor.

It starts with her injury and then her going on her own to the hospital. Eleanor decides to go home with her parents and sister. The mom (Isabelle Huppert) is French through and through, always seen with a glass of wine. Her dad (William Hurt) is still a psychologist at the local university, and her younger sister (Jess Weixler) has a little boy of her own, but no man or boyfriend in her life. She was already living with the parents still. Her family tries to get her help, but can’t seem to provide enough help on their own, the awkwardness of the whole situation. Some psychology degree, am I right?

So she does go to the local college to take a few classes. There she develops a nice bond with another psychology professor (Viola Davis), who is able to talk to her like a real person about normal things, since she knows nothing about Eleanor’s last few months. Her time alone allows Eleanor an attempt to find herself, and interact with Conor on her own terms in her own ways. Slowly, surely, and eventually full of hope.

In Them, it is the longest of the films at just over 2 hours. However, it is literally just everything you seen before. You still get the scenes between them, but this time you also get some of their individual scenes.

Them is packaged in a way so that it can be their complete story in a regular time frame for a regular movie. A movie about sadness and grief and how two different people cope. Technically, some of the scenes between them we see from a few different angles, but it is just a cram packed version with less individual detail on each character. Although, when watching it, it still felt like it featured a lot more of Her than Him. 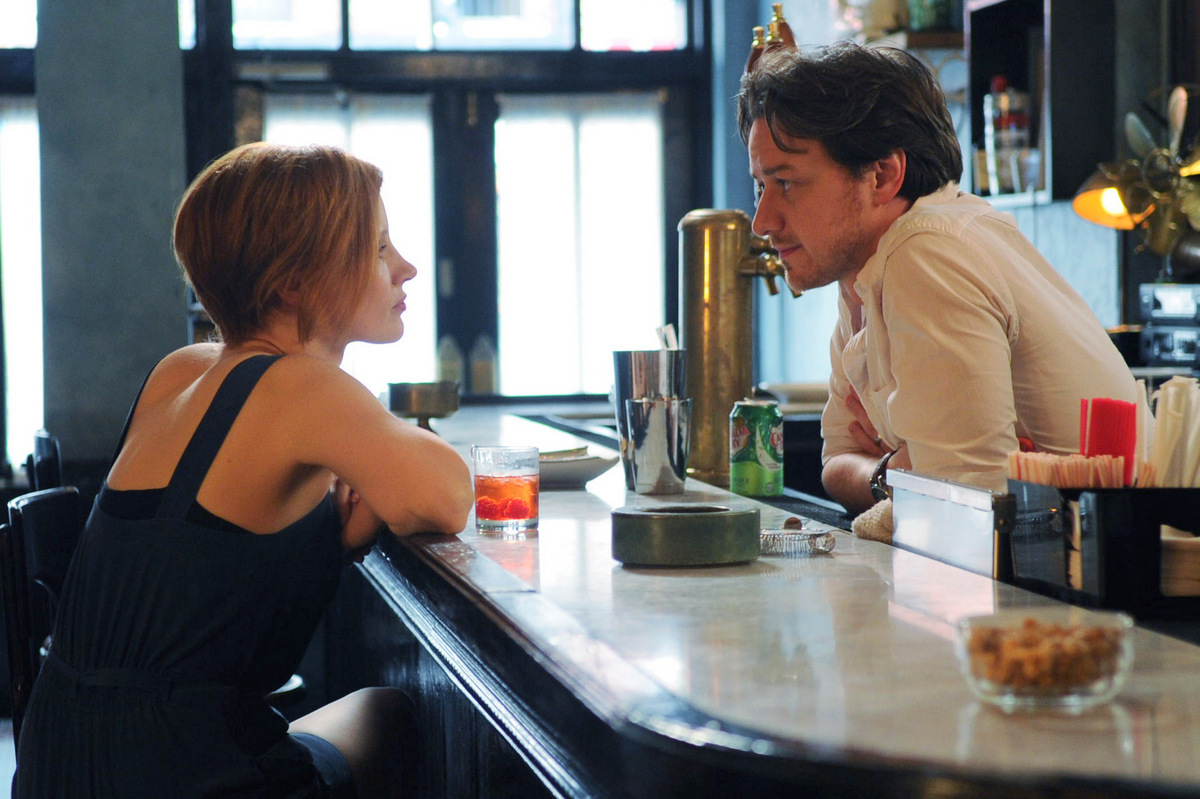 Then comes alcohol to end all of the sadness!

In fact, you shouldn’t watch all three, and definitely not in the same week. You should only watch Him and Her, or Them, not all three. If you just watch the first two, you will get a very unique experience and you will get it in three hours, nine minutes. A much more reasonable amount of time. If you are feeling lazy or want a very regular saddish drama, then just go for Them. Its like a not very effective cliff notes.

Now, I watched them in Him, Her, and Them order because it just seemed to make sense. I knew the films were about the woman leaving, so it makes since to keep some mystery and watch Him before Her. Doing so allowed the film to answer questions are different times and felt like the best experience.

This only matters if you care about my recommendation of course. The best experience would just be Him and Her, no Them, because it is mostly repetitive. It sucks that I cannot wipe Him/Her from my memory before Them to give an unbiased review of it. But Them on its own didn’t feel like a great movie. Obviously I had the issues of it being full of scenes I had already seen (does that sound weird?), but it also cut out a lot of other scenes that I felt were necessary.

Them is Shit. Him and Her combined are a good experience. If you were going to watch just one of Him and Her, it won’t be good. It would just be odd and you don’t want to be odd.

Oh yeah, for whatever reason, the movies end differently. I have no idea why this happens, but Her has the best ending, in my ever so humble movie reviewer opinion.

Him and Her: 3 out of 4.
Them:1 out of 4.
Tags:1 out of 4, 2 out of 4, 3 out of 4, Bill Hader, Ciaran Hinds, Drama, Fucking Finally, Her, Him, Isabelle Huppert, James McAvoy, Jess Weixler, Jessica Chastain, Nina Arianda, Romance, The Disappearance of Eleanor Rigby, Them, Viola Davis, William Hurt