Movies about male strippers aren’t very common in the world for whatever reason. Women strippers? Sure. But men? Nah. Which is shocking, given the large success of the last male stripping movie I’ve seen, The Full Monty. So why not Magic Mike? Only like a 14 year difference or so. That is incredibly small amount of male stripper movies.

But when you also decide to make this movie pseudo-biographical? Yes. Apparently it is inspired and slightly based off of Channing Tatum‘s early life, when he was a male exotic dancer. Well, that just makes it heartfelt. I guess. 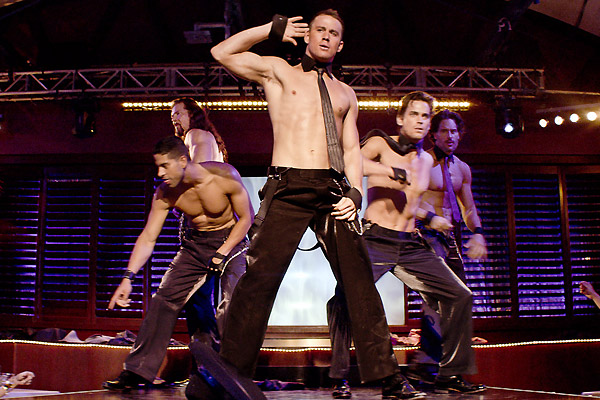 We at Gorgview.com would like to note that we are not sexist, and as such we are fine with men being turned into objects, just like women.

In the heart of Tampa is a dangerous part of town. Sexydangerous. A male strip club, that is only open three nights of the week, where women go to flip a shit over men getting almost naked and dancing. Lead by Dallas (Matthew McConaughey), a now slightly older showman who never strips himself, he brings on energy and a good time to any lady who has the cash. Their biggest act is Mike (Tatum), now 30 years and still showing off his strong dance moves. Other dancers include Tito (Adam Rodriguez), Ken (Matt Bomer), Tarzan (Kevin Nash), and Big Dick Richie (Joe Manganiello).

While working on a construction gig, Mike runs into Adam (Alex Pettyfer), just a 19 year old kid, who is pretty down on his luck. After a few run ins, he has him stop by to help run props for the dancers, and due to an accident, he is thrown onto the stage to strip without any real training! Well it works out, kind of, so he joins full time. And he has a sister, non approving Brooke (Cody Horn). Mike would totally persue that, you know, if she wasn’t so stuck up, didn’t already have a boyfriend, and if he didn’t kind of have a weird thing going on with Joanna (Olivia Munn).

Either way, Adam is introduced to the living large lifestyle, and gets pretty deep pretty fast. Mike himself would rather stop stripping eventually, and work with his hands, building customer furniture. Once banks give him a damn loan (shitty credit dealing only with cash), and you know, if he didn’t have to pay off other miscellaneous purchases. Oh yeah, and Gabriel Iglesias is the club DJ, but as he is Hispanic, he is also a drug dealer. 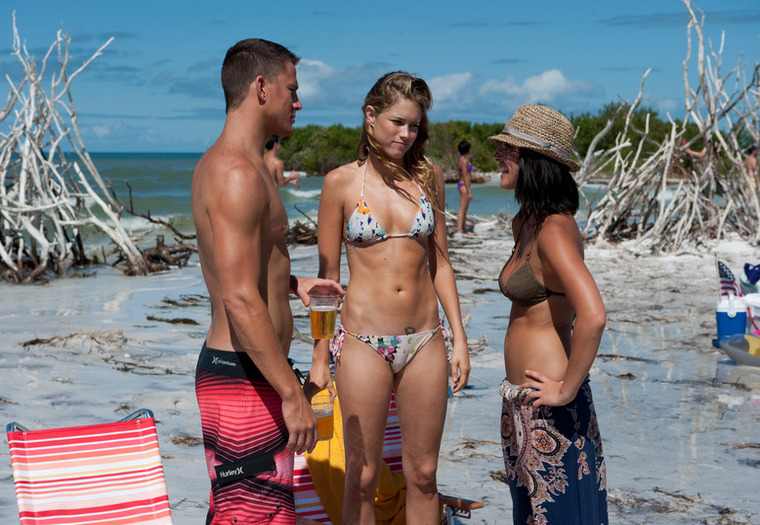 To further clarify our non-sexism, here is some women potentially being objectified as well.

So, surprisingly I guess, the movie wasn’t completely terrible. Was there lots of eye candy for the females? Sure. But the dance moves / performances were generally mostly good, with some big exceptions. Even some funny moments. But the biggest problems really came from a technical stand point.

Generally, I found the transition between scenes to pretty bad in this movie. It opens to the McConaughey “do not touch” monologue from the trailer, but then goes to a black title screen with JUNE on it. Alright. I have no idea why though. I guess the first scene wasn’t June, and now it is? Or we are in a flash back? No, they just arbitrarily decided to tell you the current month that way, fine.

But besides that, scenes would end a little bit too long after the joke, or just at other awkward moments, never flowed too naturally. They also tried to do a lot of long shots for conversation scenes, which were hit and miss. Most of the time they were a miss if they involved Cody Horn, who was pretty bad in this movie. I guess her character was supposed to have a disapproving look 100% of the time on her face, but holy crap was it annoying.

Finally, Kevin Nash. What the fuck. He played the bigger male stripper, but whenever there was a group dance scene, I couldn’t pay attention to the sweet break dancing, because every time he was on camera he looked out of place. Dancing like a robot, not doing much at all. They could have easily gotten a big guy who can actually jump, no idea why they went to shit with him.

I’d say the plot wasn’t the best, but the (mostly) well choreographed dance scenes earn it a watch.