Here is an example of a biased review. Yesss!

Scott Pilgrim vs The World is a movie based off of a 6 part graphic novel series more or less called… Scott Pilgrim. The novels were one of my first forays into owning graphic novels and reading them, when there was still only the first four out. By the time the sixth one came out, I was able to go to a midnight release of the book and read it all before I went to sleep. Then the movie came out a few weeks later, and crammed all of the stories into one movie. And it was epic. 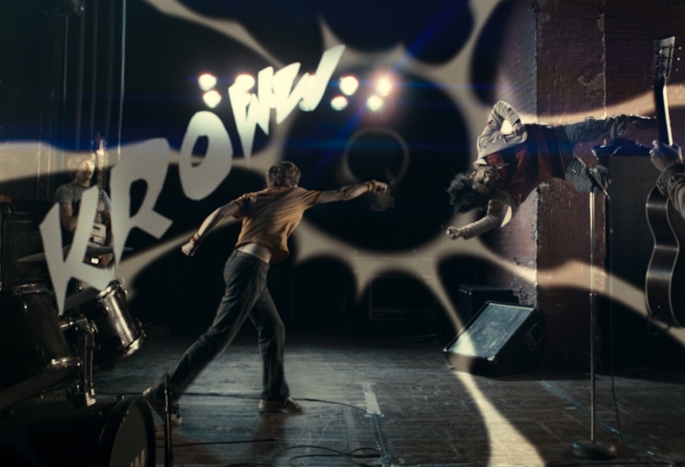 You might even say I am in lesbians with it.

Scott Pilgrim (Michael Cera) is our main boy, and he lives in the mythical land of Toronto, Canada. He is 22, and living with his gay roommate Wallace (Kieran Culkin), and has little to no prospects outside of his band, Sex Bob-omb. The lead singer and guitar player is Stephen (Mark Webber) and the drummer is Kim (Alison Pill, and dated Scott a long time ago). So what is Scott doing? Dating a HIGH SCHOOL CHICK, named Knives Chau (Ellen Wong) and she becomes a groupie along with Young Neil (Johnny Simmons).

But then he meets Ramona Flowers (Mary Elizabeth Winstead), a cool American chick and wants her so bad. What he doesn’t know, is that to actually be with her, he has to first defeat her seven evil exes in order. What?! Yes. Including an emo, a movie star (Chris Evans! In his 5th comic movie role), a vegan, a girl, twins, and Gideon (Jason Schwartzman). Can he defeat the exes? Can he handle his own exes? Does he know how hot his sister (Anna Kendrick in the movie) is? Also Aubrey Plaza is in here, more famous for Parks and Rec.

Of course, as it is a six book to one movie adaption, a lot of fun cool stuff had to be left out. Like my favorite panel in a comic ever.

Hopefully you can tell already that a lot of the movie is kind of video game-y. If you ever played older ones, this movie has a lot of shout outs for you. Parts are written like the comic as well, and full of smaller inside jokes, but they don’t take away from anything if you’ve never read the books. It is also a very fast paced movie, so time should fly by pretty quickly while watching it. Also, hilarious.

Fight scenes are great. Characters are great. And you won’t be able to guess how it all ends. If I had one real gripe, it is that there won’t be anymore movies. And they never made any “save point” jokes. For a first time watcher, a lot of the names thrown at you at the start may confuse you too. But hey, get over it.