And it frankly was the best thing Slate has ever done. She is in a lot of kid movies weirdly enough, along with voice roles, so those rarely are anything noteworthy. And then on the other end of the spectrum, she can be in these raunchy/annoying roles that make you remember her, but usually in a negative way.

Obvious Child was a nice balance between outspoken and notable in a good way.

So I was excited to hear that the pair had teamed up for a new movie, Landline, not at all related, but hey the same director and same star. 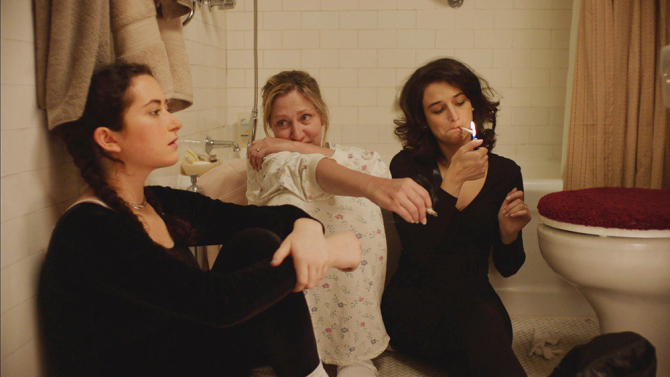 And hardcore tobacco use in a bathroom. Is this what Mötley Crüe was talking about?

Dana (Slate) is an adult, working a job, and living with her fiance, Ben (Jay Duplass), who is a bit boring. And by that I mean their life is routine, their sex doesn’t lead to climax, and every time they try to spice things up it goes wrong. Her younger sister, Ali (Abby Quinn) is almost graduating from high school and thinking about colleges. She is super smart, but she is getting into dumb positions and working with drugs, putting a strain on her future.

While that is going on, Dana separates from her fiance temporarily to find herself, which she does in the arms of a friend from long ago, Nate (Finn Wittrock). Oh boy, time for everyone to have panic attacks about their lives and question all of their relationships!

The face you make when you realize your dad was actually cheating with the hibachi chef the whole time.

Landline is going to be remembered as one of those movies that really just fit the okay rating. It had some things happen, some notable moments, but the whole thing failed to stick with me in anyway. I don’t even have any large complaints. No one acted terribly and no character felt badly written. Everyone in the family was pretty realistic, as were their relationships and attitudes towards each other. It just didn’t resonate.

And hey, I didn’t even find Slate annoying in this film, that is a first!

I was most impressed with Turturro, he did a lot with his face and body, despite a more limited screen time than the two lead actresses.

Also the ending of the film felt wrapped up too nicely. It ruined a bit of that realistic feel and turned back into a movie, but one that didn’t match the way one would assume with the choices a few characters had made.

The good news is it wasn’t terrible, so I would be more than willing to watch another team up with Robespierre and Slate. Unlike the team up of Wahlberg and Berg.