Last summer I watched two really good teenage romance films that involved death based on books. The Fault In Our Stars and If I Stay. I was surprised at the quality of both films and how I was able to still connect with them despite not being in the target demographic.

Of course, John Green wrote The Fault in Our Stars and wrote a few books besides that one. Before that one, he wrote one called Paper Towns, which my wife has assured me is fantastic.

Really, as long as it avoids the normal cliches, it will probably make me happy. And knowing my recent track record with any sort of romance film or drama, it will probably just end up making me cry in public again.

It does feature some amateur level hallway creepin’ though, so that’s a plus.

Quentin/Q (Nat Wolff) has always lived a typical lame boy life. He does what he is supposed to, does good in school, has nerd friends and no love life. He does have love in his life, however. He loves Margo (Cara Delevingne), who moved across the street from his house when they were both kids. Back then they hung out and started to do adventured, but she did it way more and eventually they lost touch. Still, he hoped and dreamed.

Then one night, she appeared at his window! She needed someone to drive her around Orlando, get revenge on her ex boyfriend and so called friends. A night of adventure and a night to remember!

And then? The next day? Poof. Margo was gone. She ran away again, Q thought they would start to hit it off, so soon to finishing high school. But luckily, Margo always leaves some clues for her friends when she leaves so that they know where they can find her. Now it is up to Q to put himself out there for once and do something out of his comfort zone! With the help of his two best friends (Austin Abrams, Justice Smith), the old best friend of Margo (Halston Sage), and the girlfriend of one of his best friends (Jaz Sinclair), he will hopefully find true love and happiness.

Also featuring the amazingly accurate kid versions of our leads, Hannah Alligood and Josiah Cerio, and Cara Buono as Q’s mom. Seriously, I am willing to believe they just filmed the kid scenes many years ago and decided to give them fake imdb credits and names so that people wouldn’t think it was weird. 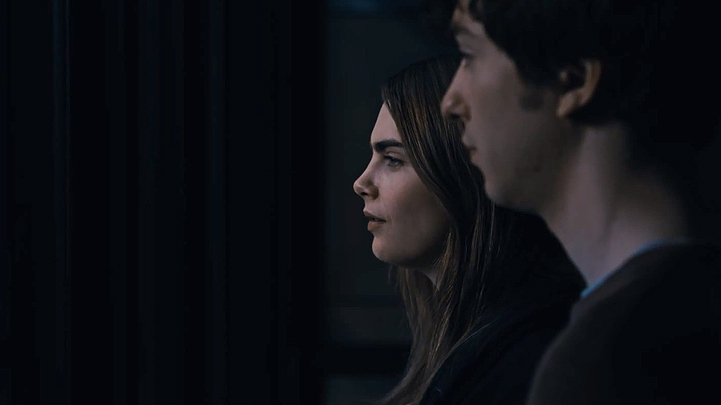 Jokes on you, I think everything is weird!

Alright, before the movie I had two hopes. First of all, I can say that Paper Towns definitely avoided cliches. It had a huge “nice guy” boner going throughout it, but by the end it was certainly not your standard story. Which was fantastic!

Unfortunately, it didn’t make me cry. No tears at all, not even a little. Come on John Green. You destroyed me with your last film, this one only gave me chuckles and contemplation.

Here’s the thing. Our two leads were fantastic. Wolff and Delevingne felt like real people for the most part with genuine expressions and appropriate reactions to everything. They made their characters awesome. The supporting cast however is not able to get on their level. I thought the chemistry between Wolff and friends felt real, but the other two actors just didn’t feel real. One character in particular was more annoying than funny.

Again, I am all for surprises along the way, and in fact, the twists in this film are generally good overall. It just didn’t resonate with me as much as I had hoped. Thankfully the leads were still great and oh so charismatic.