Recently I asked my two labs what their favorite movies were. I asked everyone, about 37 students in all, and I was happy to say I had seen every single one of them already.

Into The Wild. I had heard of it mentioned before, but never seen it. Well, I couldn’t let my record stay at only one away, so I set off to see it immediately. Didn’t hurt that it fell in my 2007+ range of reviewable movies!

Hey uhh, that’s some nice geology you, uhh, got going on there.

Chris McCandless (Emile Hirsch) is not like normal boys. No, he is a free spirit, a guy who just hates the grind towards success in life, and he only just graduated college. Well, after he is finally living alone, he says fuck it. I don’t want to do this shit. I want to go out and live on the land, enjoy life for what it is and become one with nature. Damn it.

And that begins his two year journey, with the goal of moving up to the Alaskan wilderness to live on his own. But that isn’t his only goal. He also kayaks down the Colorado River all the way to Mexico, works a few odd jobs, and gets in trouble with the law. His parents (Marcia Gay Harden and William Hurt) are distraught, as their boy seemingly fell off the face of the earth. He has no intention of being found either. His sister (Jena Malone) seems to understand why he did it all, but doesn’t mean she is fine with it either.

Oh, but he isn’t alone on this journey. He meets many people along the way, with different stories, theories and stations in life, and many free spirits. (These people include Brian H. Dierker, Catherine Keener, Vince Vaughn, Hal Holbrook, Kristen Stewart, and Zach Galifianakis). 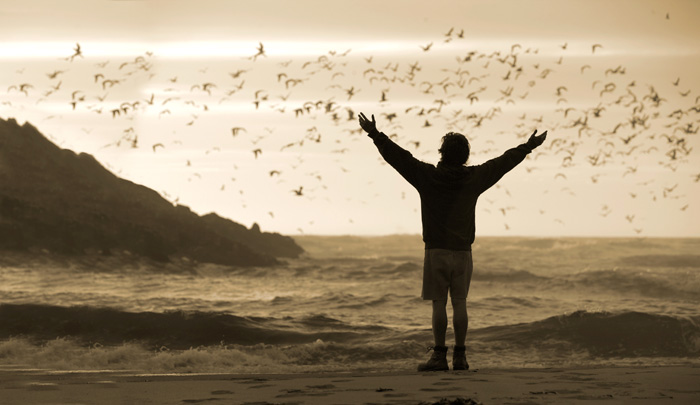 No. You will ONLY get artsy looking pictures in this review, damn it.

Oh here is another fun fact. This movie was directed by Sean Penn. That fact wasn’t fun for you? My bad. But maybe mildly interesting.

This is the only movie I have seen directed by Mr. Penn, and let me a tell ya. It was pretty intense. I am kind of disappointed no one told me to watch this movie earlier, because it is such a great (and true-ish) story!

I am not the kind of guy who will ever give up things to go and discover myself. I like things, I like that they are a part of myself. Hooray capitalism and what not. If I didn’t like things, I wouldn’t have so many movies. But even I felt attached to Chris during his story. Full of ups and downs he discovered the truth about his life and did what he loved most in the world.

The movie is over 2 hours long and I didn’t notice it at all. I don’t think I have seen Emile Hirsch in any other movies, but I think his acting was just so tremendous in this movie, I am going to have to see more. The next will probably be Speed Racer, where he is the titular role, that way I can have a lesser opinion of him. Or something.

Into the Wild is definitely an overlooked movie from about 5-6 years ago, and should be a must watch for some time to come.