FIVE HUNDRED. That is actually significant. Kind of like the first review, or 100th. 500 is such a nice number, so I have to do my most speicalist review ever. I have to review the movie, that is a remake, of my websites name sake.

Clash Of The Titans came out in 2010, and was supposed to be a big event, after all, the original Clash of the Titans was still talked about at that point, and was a big event back then.

But even back then, everyone knew the original movie was kind of shitty. Bad special effects, plot, was just super silly. So of course the best idea ever would be to remake it with the SAME plot, but instead of bad special effects, we will very expensive bad CGI effects. WHAT A GREAT IDEA! Honestly, I thought the effects in the movie were so bad, I couldn’t tell the pictures between the two movies apart, so I might end up using some of the old one “accidentally”.

Hopefully by now you realized that my logo of “Watching shitty movies so you don’t have to” and relating it to Gorgons, is that if you watch bad movies, you might turn to stone. And I am saying Clash of the Titans is a bad movie. 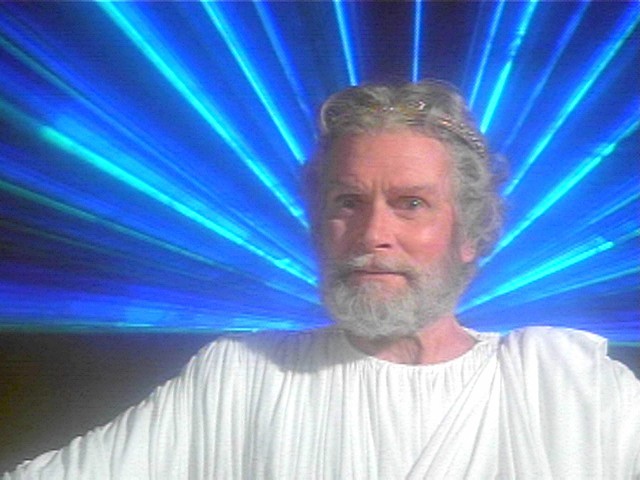 Just ask Liam Neeson as Zeus. That is him right?

Blah blah blah, Hades (Ralph Fiennes) is a bad guy in this movie, because for some reason the ruler of the Underworld means bad person. Of course he was also “tricked” into ruling the Underworld by Zeus and Poseidon, so really any anger he has in those context seems justified.

Either he accepted the Underworld and is a decent god like the rest, or he was tricked in to there by his dick brothers, and thus wants to fuck things up from time to time. I don’t see how either makes him a bad dude. But hey, maybe there is a secret reason he is pissed off.

Anyways, Baby Perseus (Sam Worthington) is found floating in a river, very Moses-esque, and raised by a different family. Eventually said family village gets fucked up, thanks to people not believing in the gods. Hmm, also Moses-esque. So everyone dies besides him, and he goes to another kingdom. They hate the gods there and are like, whatever. Even saying their daughter Andromeda (Alexa Davalos) is the hottest bitch in town.

More god interruptions, and apparently the Kraken will be summoned if Andromeda isn’t sacrificed by the next solar eclipse.

Also Perseus is the son of Zeus. 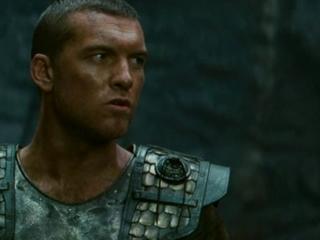 I’m sure he was stoked to hear the news.

So of course he gets imprisoned, where he meets Io (Gemma Arterton) who is immortal after not sexing up Poseidon (what?) and is forced to watch over his life and protect him. Sweet deal. She tells him his mom was a Queen who died, after she was impregnanted by Zeus. The King Acrisius (Jason Flemyng) tried to war against the gods, and that is how they punished him, so he sent them to see. Also he turned into a legit monster. 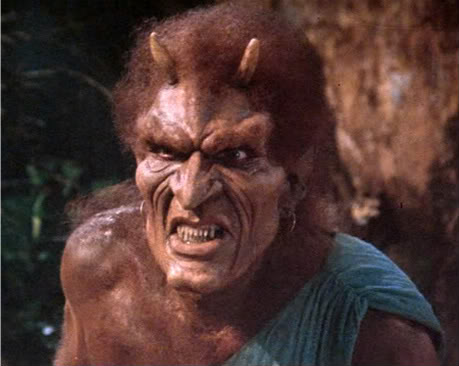 “What a monstrosity! Why won’t he shave!?”

Eventually he is freed to go find a way to stop a Kraken with a small army. While Hades makes Calibos (that monster “dad”) stronger, to kill Perseus. But first he must face other trials! Apollo (Luke Evans) tries to give Perseus a cool sword and Pegasus to help fight, but he refuses. Then Calibos comes and fucks some shit up, so they run, and of course they run straight into a giant scorpion.

I mean, of course.

Some Djinn save them, and cure their poison. They also let them know the only way to stop the Kraken is with Medusa’s head, a Gorgon. Bitch turns anything of flesh into stone if they look at her. Including the Kraken! So they decide to go to the Underworld, because where the hell else would she be? Zeus tries to stop them and make Perseus a god, thinking he wont want to kill them all if he has the power too. He refuses. Of course. 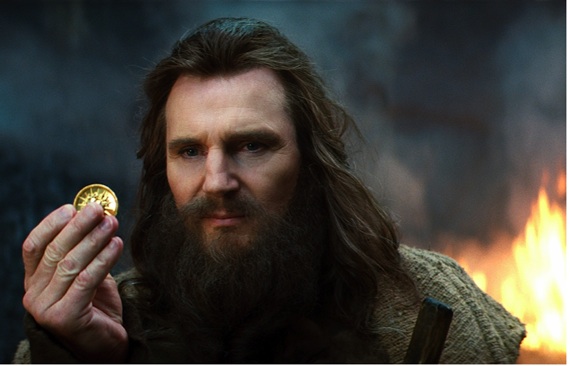 At least he gets a coin as a consolation prize!

So they go to the Underworld! Find the lair! Io can’t go in because she is a woman! (What?). Most of the crew dies, but thankfully Perseus survives and cuts off her head in a very unapologetic fashion. Kind of rude if you ask me. Could have just asked her to help stop the Kraken. 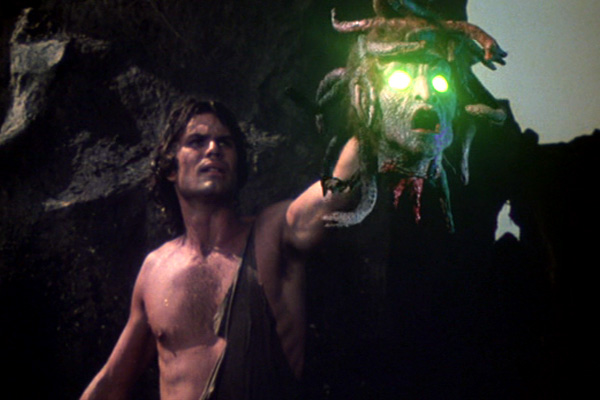 But after that, the monster dude comes back! He totally kills Io. Fuck. But he is able to slay him, with the help of that sword, and turn him back to his normal human form. Still dies though. Perseus realizes his fate and that he needs to stop being so selfish, accept help, and fuck shit up. So he hops on Perseus (who was also just hanging around) and heads to save the day! If only someone had told him he’d need these things earlier. 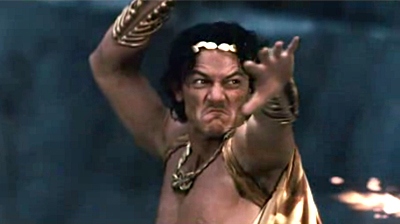 “Fuck you Perseus! Who turns down a gift?”

So Kraken is about to be summoned, and the gods are weaker because people still aren’t respectin’ them. BUT WAIT. Turns out Hades also gets stronger from fear, and the Kraken is a scary ass beast. Guess who is the strongest god now? Hades can totally take over Mt. Olympus. Way to fuck up Zeus. What do you have to say for yourself? 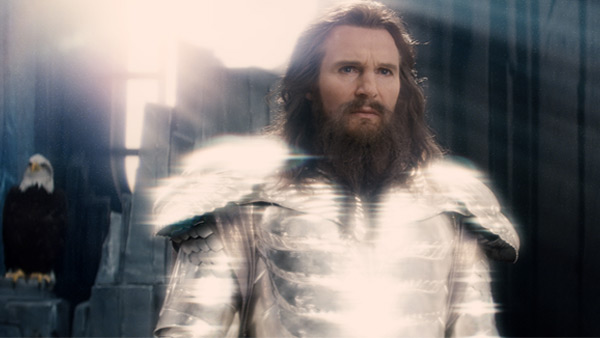 “Oh my bad. I’m actually trying to audition for Twilight. Got distracted.”

So he rushes to the Kraken, who is taking out everything, and trying to eat Andromeda. After all, the sacrifice still needs to happen, for some reason. Getting the head to Kraken proves to be difficult. I also assume his hunger is pretty insatiable, given his large mouth, and large dorment period. 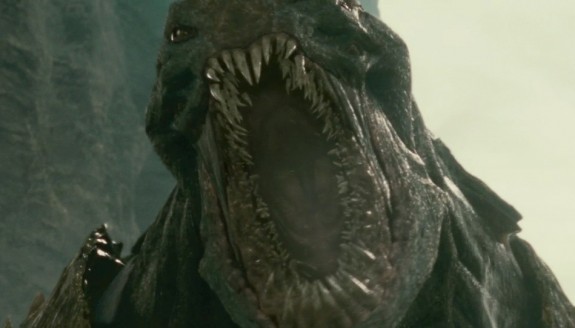 But yes. Perseus eventually shows the Kraken his head. Stone. Saved the day. Somehow everything is back to normal. Perseus still says no to godhood, and no to king hood (Turning down Andromeda). He instead gets Io revived, and wants to just run away and do whatever he wants.

So what is the problem with the movie besides its horrible special effects, its lame butchering of Greek Mythology, and its poor acting? 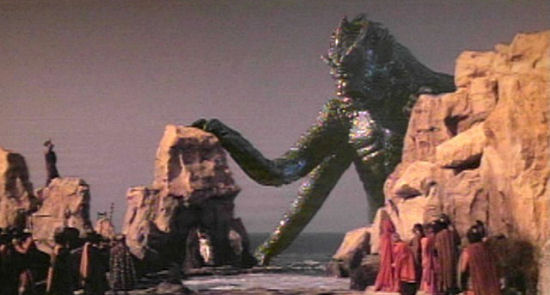 Which version of the Kraken is from the 80s? I have no fucking idea.

It is also super BORING. Gah. I hate boring movies. Well it depends. A drama that can be considered boring or slow usually has at least an emotional connection if you stick with it, or some character development. But Action movies that are boring? That pisses me off to no end. That is a special effects driven movie, and literally no effort seems to be put into any other aspect of it. It looks like an entire green screen explosion.

This movie makes the color green even look bad.

I have no idea what else to say, but thanks for reading the first 500, and here is to another 500!