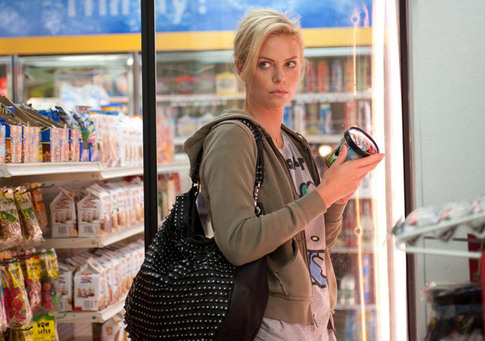 It’s the Hello Kitty shirt that should really speak to you here.

Charlize Theron is a very successful writer in NYC! And by very successful, I mean she has written books as part of a series, but didn’t create the series. Although he name is on the inside flap as the author, the series creator still gets front cover status. It is found in the “Young Adult” section of a book store. Oh well, still cool. Especially since she is a girl from a small town in Minnesota, where most people just stay put and live there their whole lives. Yeah!

But now she is getting depressed (and may have been an alcoholic for some time). She just broke up with her long term manfriend, and her high school boyfriend is now married just had his first kid. And the series is ending, so she has to write the final book, and then figure out what else to do with her life. Seems like a good time to visit her home town! Oh, and plot to win her old love back. Who cares if he is married and has child?

First she meets Matt (Patton Oswalt), a kid who she barely knew in high school, who was taken to the woods and had his legs and dick beaten by jocks with crowbars, for being gay. But once they found out he wasn’t gay, it was no longer called a hate crime and they barely got into trouble. He says her plan is stupid. But she tries anyways to recreate how she looked in high school, and how they would do young people things, like getting drunk at a bar! But Buddy (Patrick Wilson) doesn’t want to.

But she keeps trying. Even going out to to the naming ceremony for the son. Yes, she does it all in front of his wife (Elizabeth Reaser). Even goes to the wives local garage band concert. Questionable motives indeed.

But can she succeed and win over her former lover? Or will the whole town think she is crazy? Life is simpler in Minnesota. Phones with cords.

So, the dark comedy part of this tag means pretty dark. Minus the death elements in a lot of dark comedies, but man. This humor is based off of extreme awkwardness, meanness, and past situations you didn’t see coming. Also the uncomfortableness of the main character being a depressed drunk, who does seemingly crazy actions.

I thought Charlize Theron (an actress I normally don’t care for) did a great job in her crisis, and truly believing all of the crazy things that she did. Thought it was her destiny to get back with her Buddy, and wouldn’t let logic or reason get in the way. Patton Oswalt did a pretty good job, most of his roles are comic relief funny fat guy, but his character was super damn important in this movie, and had a lot more subtle humor.