Some people enjoy eating competitions, fireworks, and BBQs for their Fourth of July celebrations. Not me. As a heavy movie consumer, I tend to spend a lot of time watching patriotic movies. You know which ones I am talking about. The kind that cause you to get out of your chair and start chanting U-S-A at the top of your lungs, or maybe even run down your street with an American flag (usually reserved for the Olympics). I am talking about the big heavy hitters, like Top Gun, Rocky IV, The Mighty Ducks II, Red Dawn, and of course Independence Day.

Which is why I’m glad we have new movies coming out around the same time as the festivities, that only want to help us express that pride we have deep down inside ourselves. What is more patriotic than a movie involving an attack on the White House, by Americans, for Americans? My fellow Americans, I give you, White House Down (Trailer). 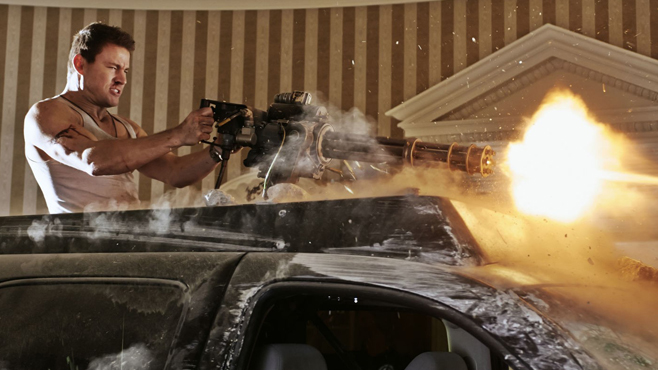 The movie takes place in a time when America is dealing with a lot of conflict in the Middle East. AKA, modern day America. President James Sawyer (Jamie Foxx) wants to be a great man and known forever in history. He has decided to pull all of the troops out of the Middle East and also offer up a peace treaty for around twenty countries in that area. It is a pretty bold move that has a lot of people angry, including the vice president who will quit if it goes through.

John Cale (Channing Tatum) might not think too highly of the new order either, after all, he served three tours in Iraq/Afghanistan himself. But now he is back to living in DC, working as a body guard for the Speaker of the House (Richard Jenkins). His dream is to work for the secret service, the highest honor in the land, especially since his daughter Emily (Joey King) is obsessed with politics, and he wants to get back on her good graces.

But while on a tour at the White house (lead by Nicolas Wright), a bomb explodes on the Capital building, putting most of DC on lock down. Too bad a group of mercenaries have all infiltrated the White House to take the president prisoner. Why you might ask? Plenty of reasons, just pick one. Surely it isn’t just for money though. Either way, it is time for John Cale to prove himself capable of being a member of the Presidential Guard, or else there might not be a country to save.

We also have Maggie Gylenhaal as a head secret service agent, James Woods as the Head of the Presidential Detail, Jimmi Simpson as a big bad hacker, and Jason Clarke as a mad mad mercenary. 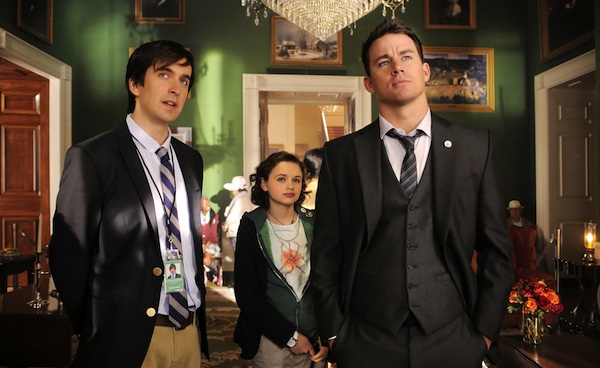 Yep. Everyone in this picture will kill someone by the movies end. For America.

I am not allowed to review White House Down without mentioning Olympus Has Fallen, which I loved. It had great action, it was tense, but it still had its weak moments. Olympus Has Fallen was a much more serious film, whereas White House Down is going for Action/Comedy and is much closer to being a Die Hard variant. It isn’t rated  but even the smallest details seem to be throw backs to Die Hard. Just look at Tatum himself. His garb mimics Bruce Willis in the first film, with the white tank top and ruffled hair as seen here.

Roland Emmerich is used to bigger disaster films, so I am surprised he was able to contain the destruction to basically only two buildings. Despite the small scale, I found myself at the edge of my seat as Tatum and Foxx were running around the White House trying to be action stars. Foxx’s character wasn’t as much of a bad ass, as he is the President, but he has a few moments.

But here is what I didn’t like. The run time is over two hours, far too long for this kind of movie. I think the main problem lies in the pre-explosion intro, which dragged on and on, trying to set up everyone’s story. None of the twists are really too surprising, as it fits a very common formula. I didn’t see the last twist coming, only because a twist there felt nonsensical. The final twist was also a bit rushed and a bit anti-climatic.

Regardless, I am willing to state that both White House invasion films from 2013 are probably worthy of a watch, at least once. This one has a limo chase seen on the presidential lawn, while Olympus Has Fallen has a limo fall into an icy river of death. The difference in limo usage probably highlights the main differences in the films. I wouldn’t describe this as a “dumber” version of OHF like other critics, but it definitely takes itself less seriously.

I am looking forward to 2014 when I get to see two versions of Hercules. (Hint: You can already tell which one will be better).