Thor comes with an all-star cast, thanks to it being such a big picture. So I might as well get it out of the way. The titular character is played by Chris Hemsworth, because the director really liked his 10 minutes in Star Trek at the beginning. Natalie Portman is an Arizona scientist studying space rifts, with Kat Dennings as an assistant. Tom Hiddleston plays Loki, brother of Thor, and Anthony Hopkins plays Odin, father of the two. Lastly, Idris Elba plays the bad ass gatekeeper Heimdall. Get all that? Good. 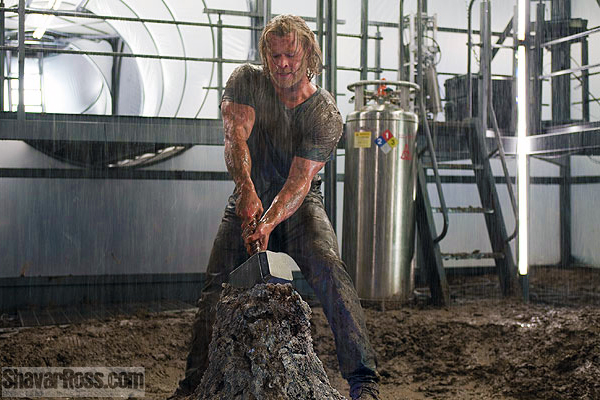 THORRRRRR. Wait. This looks like the sword in the stone?

I really don’t want to describe the plot of the movie, but I guess I have to. Thor loses all his power and gets sent back to earth. He is weak and a human, and has to learn to be a true hero before he can be accepted as a god again. Okay, part of that may be from the Disney Hercules movie, but who is to really say if you haven’t seen Thor yet? Similarly, if you have, you shouldn’t care. Because Thor is great. Watching it reminded me of the first time I saw Iron Man or Hellboy II. It had humor, action, great story and effects, and just great everything. The SHIELD agent from the films is getting a bigger role in this movie.

One of the hardest proms is relating with Thor. Dude is a god. Generally he has powers. When he does, pretty much no other super hero can take him down, so he becomes this ominous super presence that is hard to use. It will be interesting to see how they use him the Avengers movie without totally just killing everyone and winning all fights on his own. I guess because his brother Loki is involved, it doesn’t mean auto win. But seriously? Thor is like a cheat code. SO here is hoping the future films will not just be awkward TooStrongToCare fests.