Everyone knows that James Cameron really loves the ocean. He is stupid rich and just wants to conquer it.

In some ways, I am starting to think that Matt Damon is like a James Cameron-lite. He doesn’t like water, but he is starting to love the shit out of outer space. Three films in three years have featured a Mr. Damon spending time away from Earth. First in Elysium, he went from the slums to the orbit. But you know, he was just there for a little bit. In Interstellar, he was in space for a long..long time. And he was alone!

Think of it like a Three Bears situation. In Elysium he was in space for a small amount of time, in Interstellar it was too long. But maybe in The Martian, Damon will find his “just right” amount of space time. You know, then he can go back to Earth and start doing political things again. Or Boston things. Or maybe, just maybe, fingers crossed, he can go back to voicing Bill the Krill. 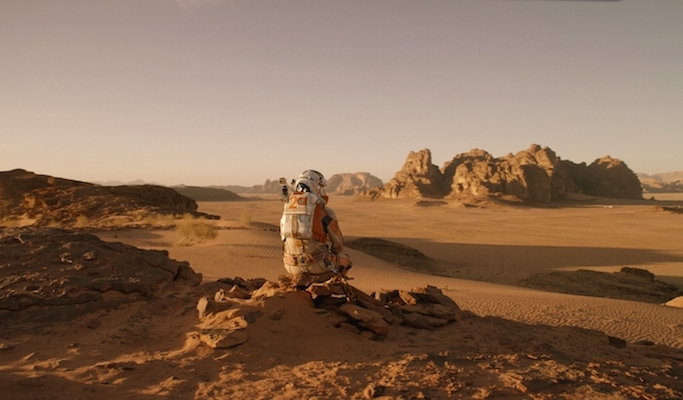 Damon had a lot of time alone to reflect on his career while pretending to be on Mars.

Set somewhere in the future, NASA has successfully put people on Mars! Yay! We rock! Speaking of Rocks, there are a lot of them on Mars. And sometimes there are dangerous rock storms. When a particularly powerful storm begins to develop, Commander Lewis (Jessica Chastain) decides that they need to evacuate the planet. There is a chance their escape rocket could tip over and then they’d be stranded! During the storm though, Matt Watney (Damon), a space botanist, gets hit by some debris and goes flying. All of their suit flashy devices say that his suit has opened and he has to be dead.

So Lewis and the rest of the crew (Michael Pena, Kate Mara, Sebastian Stan, Aksel Hennie) escape Mars to begin their flight home a few weeks ahead of schedule.

But it turns out, against extreme odds, that Matt is actually alive. However, he is now stranded. The mission only was supposed to last about 30 days, and they had made it to 17, so his rations aren’t that plentiful. He has a huge checklist of responsibilities suddenly that are all vital to his survival. He has to figure out how to grow his own food on a desert planet. He has to make sure his equipment doesn’t break, so he doesn’t run out of water or oxygen. He has to figure out a way to communicate with NASA. And of course, he has to figure out how to get himself home. Even though Matt wants to survive, he openly acknowledges his impending doom and realizes that almost everything he does is just prolonging his most likely catastrophic death.

Eventually, obviously, he isn’t 100% alone. Or else it would be an impossibility. Back on Earth, thanks to satellites, they are able to eventually note the differences of the site and realize he must be alive and kicking. This is where I can sneak in all the rest of the actors.

Who is involved in the mission to get him back? Well, of course, the Head of NASA (Jeff Daniels), a different head of NASA type guy (Chiwetel Ejiofor), head of the Mars program (Sean Bean), head…engineer…of the shuttle? (Benedict Wong), an Astrodynamics guy (Donald Glover), head of NASA PR (Kristen Wiig), and Mindy Park (Mackenzie Davis) who controls a satellite. Or something. 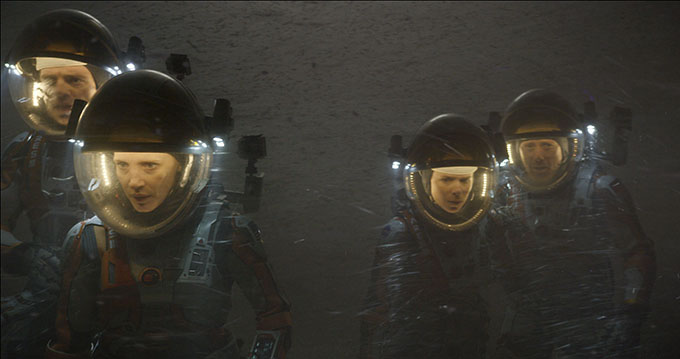 This unfortunate scene reminded me too much of Fantastic Four and now I am undergoing PTSD.

Ridley Scott has been not putting his best foot forward recently. Exodus: Gods and Kings and The Counselor were terrible, and Prometheus had a lot of issues. So I have to go into every new movie of his with a bit of a hesitation.

Thankfully, Scott did not disappoint this time and knocked The Martian out of the park.

The absolute best part of the film is its attention to detail and scientific accuracy. I don’t know how hardcore they went into it, but I will be checking Neil Gegrasse Tyson’s twitter to see if the stars on mars were at least accurate. But everything else is so damn sound and smart. I almost stood up in the middle of the movie to chant U-S-A and show off my Science Boner. That is a bit graphic, but the metaphor is necessary to emphasis how sexy it all was. It isn’t dumbed down and they just go full on smart people talk on the viewer.

After the science, we have to talk about the Damon. Damon plays what has to be the greatest Botanist ever on the silver screen. I don’t know how praise worthy that statement actually is. The writers made him smart, charming, witty and a guy with a morbid sense of humor. He tells jokes to logs where he notes everything he is doing, with the caveat that it probably won’t matter since he will most likely die. And he even got to say “Fuck” twice in the film, despite the PG-13 Rating!

Basically everyone in the cast was great in their roles. Even Stan, Mara, and Hennie, the crew members who people don’t care much about. I want to give special shout outs to Glover, who had a small role but was extremely convincing, and Wong, who was an important side character who for some reason didn’t even make the IMDB credit list.

The film is of course also visually wonderful. Mars, the future Houston space center, outer space, all of it is great. I don’t think 3D added much to the film, and it should be a good experience without it. It isn’t as necessary as Gravity.

Despite how much I liked the film, it only has one issue. There is a sort of epilogue after the events, so you can find out what happened to characters. It seemed off to me. It was also a bit sudden of a tone shift. The previous scene I was almost at the point of tears (You don’t get to know if from happiness or sadness, sorry), but they ended it too quickly for all the emotions to rile up in me. And the last few minutes were just…meh.

Oh well, 99% of a film is still pretty damn awesome.