I was forced into watching the trailer for The Huntsman: Winter’s War and I was confused. Based on the plot and what I remember about Snow White and the Huntsman, my timelines started to hurt. It said it was a prequel, but if events in the trailer happened in the prequel, how did we even get the first film? That was my main concern going in.

But before we get to that, it is hilarious that this movie even exists. Right after the first one came out, there was talk about a sequel but about The Huntsman instead of Snow White. The point of the first film was to give us a strong female lead character, so to kick her out for the sequel is just amusing.

Of course, there was also the scandal with the director, Rupert Sanders, and Kristen Stewart, having an extra martial affair thanks to the film. I wonder why they weren’t invited back… There can only be so many queens in one picture.

Before the incidents of the first film, our Evil Queen (Charlize Theron) was marrying king after king, killing them, taking their kingdom, and moving on. She also had a family, namely, a sister. Freya (Emily Blunt) had no magical powers as she hadn’t unlocked them yet like the rest of her family, but after tragedy, sure enough, she had ice powers.

Freya runs to the North after losing her kids and decides if she cannot raise a baby she will raise an army (actual line from the film). So she begins to conquer nearby villages and kingdoms, stealing their kids so she could turn them into her own personal warriors. Her Huntsmen, as she calls them.

That is where we get to meet Eric (Chris Hemsworth) and Sara (Jessica Chastain), well, the kid versions of them. They are the best warriors, her cream of the crop, and they fall in love. But love is forbidden in her kingdom, for reasons. And if you remember the first film, you will remember that Eric was super drunk and depressed over the death of his wife Sara. It doesn’t take a genius to spoil what happens next.

Did I just spoil the whole movie? Nope. Because then it fast forwards to after the events of the first film. We have a prequel and a sequel. For the real plot of this movie, the magic mirror goes missing on its way to a Sanctuary to lock away its evil. So The Huntsmen is forced to go look for it to help end its evil. And on the way he has the help of some he-dwarves (Nick Frost, Rob Brydon) and she-dwarves (Sheridan Smith, Alexandra Roach).

Of course this might put him on a path to go against The Ice Queen, which is good since he hates her and all. Sam Claflin briefly resumes his past role and Sope Dirisu is also a Huntsman with speaking roles to make the cast more diverse. 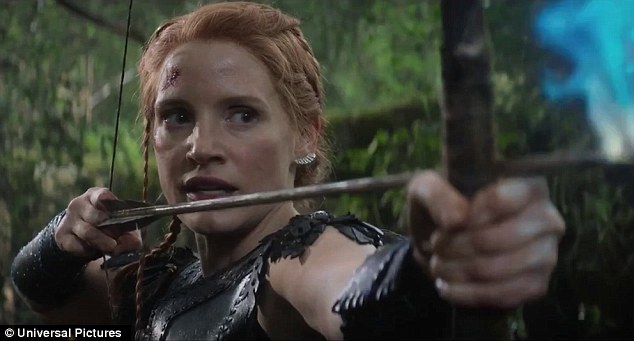 You’re god damn right I’m reviewing The Huntsman and not showing The Hunstman in the pictures. #GirlPower

Off the bat, this film is definitely superior to the original, but it is still not a great film. The idea of having it as a prequel was weird to me as I couldn’t imagine a good enough story to take place pre-Snow White. And a sequel was weird because I imagined it would only dampen the point of the first film. So it did both and did the best it could to try to make a coherent story.

I have problems with the prequel, because if there is this terrible Ice Queen up North ravaging the country side, you’d think someone would mention it in the first movie. Maybe even that the Queen had a sister. The only part not shoe horned in is the fact that Sara was his wife and she dies. But even that was poorly done and didn’t seem like the type of thing that would drive him to years of depression and booze.

As for the sequel, yes it does cheapen the first film, but the first film was bad. The adventure wasn’t that great, the plans were still piss poor. The special effects were a bit better as was the humor, thanks to the dwarves and Hemsworth playing a happy Huntsman. The fight scenes in general were a lot better as well.

The film still suffers from a rushed ending with a lot of silly actions from the characters. I was pretty sure I heard the narrator say that Freya was betrayed by her sister early on, but apparently Freya didn’t know that? The betrayal came at the very end and the fact that it was supposed to be a surprise confused me.

Other minor notes: Yes, Blunt had to play someone emotionless, but it was terrible. Chastain and Hemsworth had great chemistry. Theron should not have been in this film. And this film has goblins, but these goblins are basically apes with horns with tar in their blood, reminiscent of fantasy trolls. Of course, the first film had a troll that was nothing like the fantasy troll, so they instead had to call them goblins.

The most ungoblin-y goblins I have ever seen.