Sometimes the best thing to do after watching a bad movie with Matt Damon in it is to counteract with a Ben Affleck movie you have never seen.

The Company Men cover had only dudes heads on the cover, and most of them wearing suits. It was either a giant con movie, or some modern piece about the economy and how it sucks to be a rich executive. It is the latter of course, only Matt Damon can be a con man. 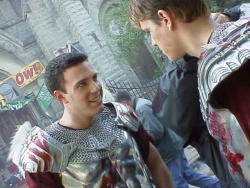 But they both can be angels.

This movie is about orporations, mergers, getting stocks up, downsizing, and those damn engineers. Also pesky college kids working for less taking our jawbs away. (Not really). More or less it is how the different people in the ladder deal with their now layoffs, having to find new work, and stuff. Tommy Lee Jones and Chris Cooper are much higher level executives who also eventually find themselves jobless, so we get to deal with the early retirement of old rich people as well.

I thought at the beginning “man, I bet someone kills themselves by the end of this movie.” Yep. Of course it happened.

Kevin Costner plays the step brother who works with his hands for a living for a smaller wage who teaches Affleck how to live and love a woman. (One of those isn’t true). This is hardly relatable to anyone my age, more or less just a scary thing that could happen in the future when I personally am rich and successful. It was an okay drama, little bit predictable. Including the message that corporate work is stupid, manual labor is where it is at. (Stolen from Office Space?)