The Belko Experiment trailer seemed to come out of nowhere, and it honestly got me really excited.

A Battle Royale experience, with regular office workers, in a potential psychological horror film with difficult moral decisions? That sounds like an amazing film, one that would quickly become a cult film and something that would top my end of the 2017 list!

And to top it all off, it was written by James Gunn, who has been kicking ass lately. Not directed, just written, but he is a pop culture junkie and someone who can really get to the heart of issues with, yes, excessive violence.

But really, the hype was real on this side. Fictional people killing people with office equipment.

Head on down to Bogotá, Columbia, where the sun is always shining and everyone is so happy! And it is also the location of Belko Indutries, a very large office building seemingly in the middle of nowhere. They help hire foreign workers for American companies, or something like that. Hard to say, doesn’t matter, they have sweet government contracts, so life is sweet.

Weird things are afoot today. All of the local workers are being sent home. There is a larger security force than normal, checking cars and looking intimidating. But hey, it is still a work day, so even with some missing people they have meetings and phones to call.

And then, a voice (Gregg Henry) comes over the loudspeaker, that they didn’t even know existed in their building. It said that most of them would die, and that if in the next 30 minutes two people were not killed, then there would be consequences. Ha ha. Must be a prank. And then the office building straight up closes entirely around them, windows, doors, all covered in large metal panels. Fuck! Well, of course no one kills anyone, so then four people die from sudden head explosions. Head explosions! Each person had a GPS tracking device put into their head, in case of kidnappings, because Columbia. Turns out they are bombs and now everyone is even more fucked.

Of course it gets worse. Now they know it is serious. And now they know that with 76 people left in the building, they now have 2 hours to kill 30 people. Or else overall 60 will be killed, randomly. Now it is time to let your animal instincts out. Now is the time to go wild for survival. And hell, a few of the people have some special forces training before this job. Doesn’t look good for your normal receptionist. 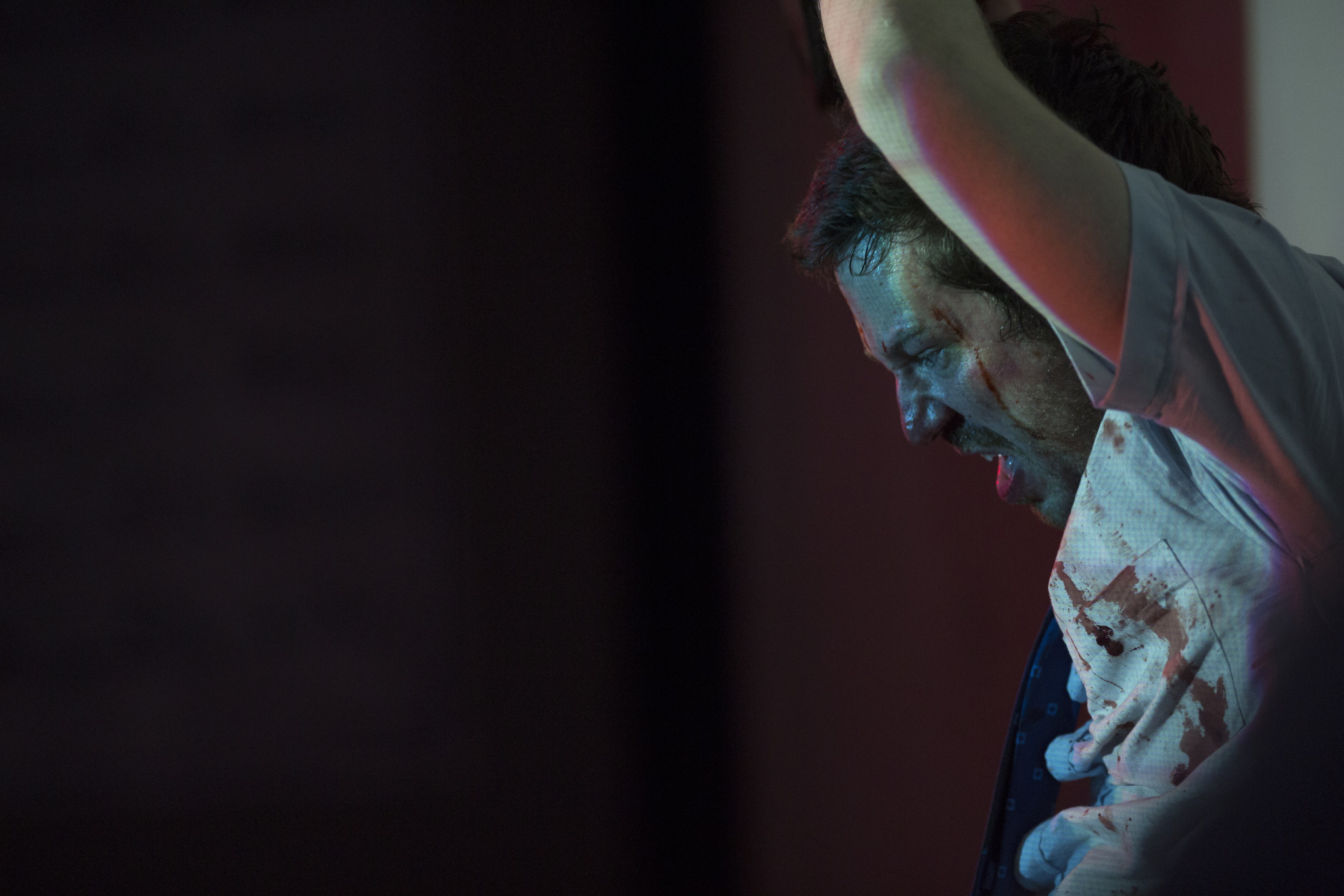 I wanted so badly for The Belko Experiment to be good.To give me a satisfying psychological horror. To really emphasis the experiment parts, and showcase human spirit and humans in general. And yes, I also wanted it to feature a ton of violence through the use of common office equipment. Things like coffee pots, staplers (of course), paper weights, chairs, paper clips, who knows. And honestly? We maybe got 3. Definitely two that stand out, and of those two, one doesn’t even kill a person, it just injures them.

When it comes to wild and crazy deaths, this film lacks them. It just gives us death. MOST people, out of the 80 starting amount, die from a gun shot wound or from their GPS tracking devices exploding in their head. And I do mean that by most, definitely well over half. We have some knife/cutlery related deaths, a couple accident based ones, and a few explosions, but most of them are just regular violence in what could have been a creative film. The trailer implied a lot different film from the tone given.

A lot of screen time is given to the characters actively trying to escape. Making signs to hang, getting through the metal, taking out their “GPS devices” and so on. Perfectly good rational behavior. And that same behavior is why we never really get the all out blood bath the trailers seemed to imply. We get forced into a situation where a few people with power and guns just start killing off random individuals without the thrill behind it.

Overall, I guess what I am getting at is that the film is too serious. The violence doesn’t lead to the fun deaths which doesn’t lead to a fun movie. But it isn’t serious enough that it makes any point either. It just feels meaningless and hollow.

Sure, we have some interesting characters. Gallagher is our voice of reason. McGinley is a creep. Goldwyn is a typical executive. A lot of people play scared office worker quite convincingly. Surprisingly, Sean Gun, James Gunn’s brother, known basically only for Gilmore Girls, is the most exciting character and his actions are fun to watch, but he can not entertain us enough on his own.

The Belko Experiment seemed like it would be an immediate cult classic, but I doubt even a sequel could save the story it tried to piece together.