One thing I can say about Rush going into it, is that it sure had a lot of trailers. At least three, maybe more, in theaters. They were also very long. This gave me two thoughts.

1) There are a lot of events in this film that just seem like a more serious Talladega Nights: The Ballad of Ricky Bobby. Dude gets burned, big rivalry, one is more foreign than the other one, lots of jealousy, comeback, whatever.

2) The trailers gave…a lot away. Sure, this is a real story, but I can tell you that most people do not know this story. It is different than Lincoln, in which we all know what happens. I am afraid I know everything that happens just from the trailers, which bugs me. Could be a cool story, but I want some mystery still you know. 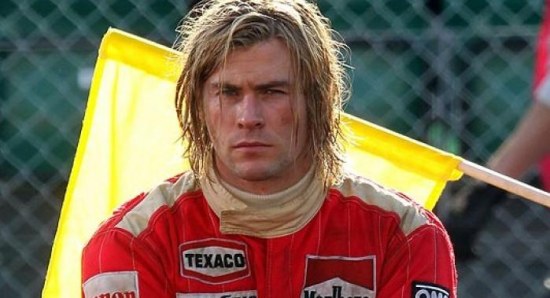 Besides the mystery wondering why someone with such lush hair could think about dirtying it up.

I was wrong. The trailers didn’t give a lot away, at all. Sure, some major points, but fuck, a lot happened in this film.

The movie takes place in the 1970s, roughly 70-76. In 1970, James Hunt (Chris Hemsworth) and Niki Lauda (Daniel Brühl) were both Formula 3 racers with big dreams to race in the Formula 1. Both outcasts by their family, they took different approaches to racing. James lived life every day as if it was his last, laughed in the face of danger, and burned out a lot on races. Niki was intelligent, not a risk taker, but good at driving. He was also a bit of an asshole, because he was honest, and cared most about winning.

Years later, both men were in F1 and constantly at the top of the pack, a fierce rivalry between the two, although both racers definitely respected each other.

1976 was the year when the most dramatic events occurred. Fiery crashes, a close finish for world championship, rain storms, disqualifications, you name it.

We also get some insight into their personal lives. Both had wives, James with Suzy (Olivia Wilde), Niki with Marlene (Alexandra Maria Lara). Pierfrancesco Favino played the role of a teammate of Niki’s, and he rocked the mustache well. 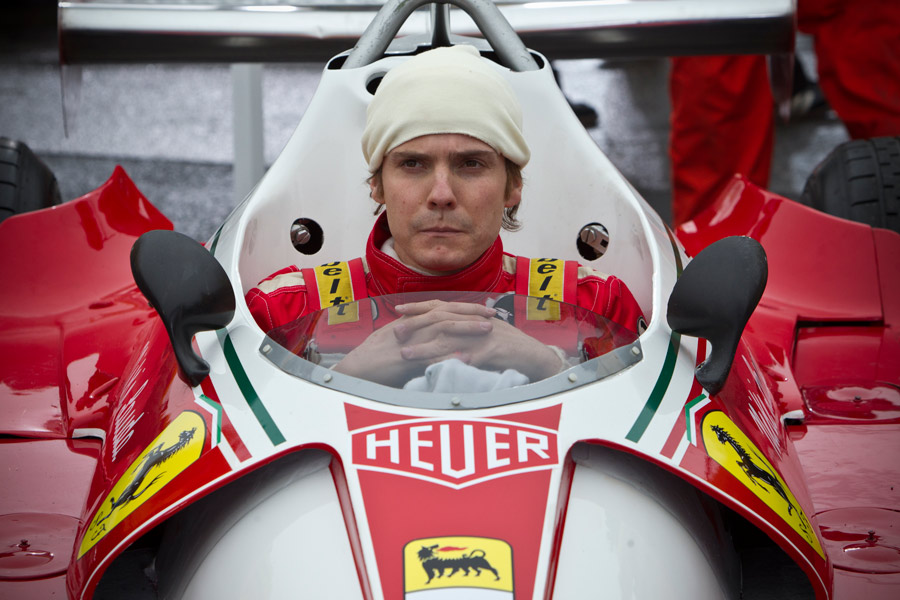 Our other star? No lush hair for him, so they can cover it up more.

Holy fuck. I really do mean it, a lot happened in this film and in this rivalry, and I didn’t feel like anything was really spoiled. Sure, that think that happened to Niki? That was kind of spoiled, but that was a big selling point to the movie, and they hinted about it right at the beginning.

I don’t know a lot about F1 racing, but I didn’t have to in order to enjoy this film. Major props to Ron Howard, who’s last film was The Dilemma and well, lame. I felt the fear that those riders must have felt during those difficult races. The way it was all set up really put you in the drivers seat at times. The dialogue was also really great, for both main characters, and I could hear them talk all day.

I think Daniel Brühl was the better actor of the two, putting his whole self into the role, although Chris did fantastic as well. Doing research, I was even more shocked to find out that Brühl was the main character in Good Bye Lenin!, one of the few German movies I own over ten years ago. The film was very graphic when it came to the crashes, accidents, and deaths, so when Niki got injured, it was incredibly cringetastic, yet I could not look away.

But here is the most amazing thing about this film. How close it matches the reality. These events were widely filmed in the 1970s, so I was able to actually watch a lot of the final race, of the race with the crash. I watched these soon after the film, and literally, the film filmed them EXACTLY as they happened in real life. The accident was like, frame for frame recreated the exact same way. How fucking nuts is that? Every race, I have to assume, was equally as correct and not made up. It is mind blowing that Ron Howard went into that much detail, and I am in awe of that ability.

The overall film experience is why it got the review. Sure, some parts I wish they explained better, like the different tire types, and other terminology. I had to ask a friend for some clarification, but holy fuck. Rush was an experience.