Piranha! A movie in no way taking itself seriously, relying on CGI “3D” effects for a better experience, and a lot of naked womens. Okay, technically that could fall under a lot of different Horror movies, but this one still has a more obvious comedic element to it. In fact, the first scene involves Richard Dreyfuss being the first to die, which is an obvious shout out.

Obvious shout out, sure. But to what?!

Earthquake opens up a chasm to an underground lake that has been sealed off for thousands of years. What is in it? A larger more dangerous form of Piranha!

“Wait!” you say. “Sealed off for thousands of year? How could they survive!”. Apparently cannibalism. So they still have large numbers somehow despite that.

At the same time as this small earthquake, Spring Break is happening on the lake of this local sunny town. Ving Rhames is the Sheriff of the town, and he hates it, with his Lieutenant being Elisabeth Shue. Her son is local boy, Steven R. McQueen, who instead of watching his little siblings, accidentally gets a job showing a pornographer the cool hot spots of the lake. Jerry O’Connell is the drug and sex crazed filmmaker, and really shows that Jerry will do anything they ask of him.

Christopher Lloyd plays retired paleobiologist like dude, who recognizes the species that was thought to be extinct (somehow). Also, Adam Scott, a GEOLOGIST, who leads a team to check out the opening to the lake.

Its weird enough to see the local cops firing their shot guns into the water to try and kill all the fish. But it just seemed like so many minutes of watching people, more or less, die the same way, in a gruesome light. The “dude trying to escape on a motor boat and run over people along the way” scene was also horrid. Ving Rhames deserved his Oscar for what he did in the movie though. It made the most sense out of all the cop actions (didn’t make sense. Just made the most sense.) 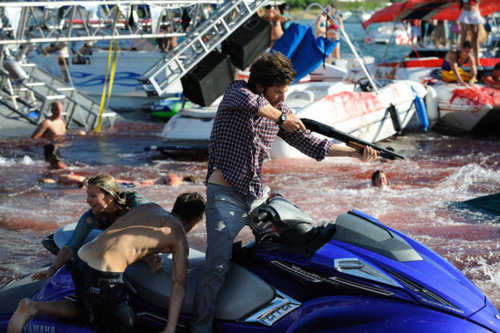 Only a bad ass geologist would think to jump on a jet ski to drive around and shoot fish in the ocean.

I was going to give it a 2/4 just because of including a Geologist hero, and so I did it anyways. I almost made it lower because of a silly grudge, but fixed that. Just now. There is a planned sequel, Piranha 3DD (get it?), and it is starring that plant chick from Sky High, and a water park.