If you are like a lot of movie watchers, you probably watched What Happened, Miss Simone? last year. It is free on Netflix and was nominated for an Oscar, so that is really all I should have to say on the matter. It was about the troubling life of Musician and Activist from the 1940’s to the 1970’s. She won a shit ton of Grammys, so you should know her name at least, even if you didn’t know anything about her.

But there is another film about her life. Not a documentary, but a nice musical bio film, just named Nina. It was originally supposed to star Mary J. Blige in the title role, which makes sense. She is a singer and somewhat an activist. But she had to drop out and they replaced her with Zoe Saldana which led to some issues.

Nina Simone grew up in a time where she wasn’t expected to succeed, she was a very dark woman and had a very distinct face, while Saldana was much lighter skinned, very pretty and is not known for her singing. In particular they had a problem with the skin color because Simone was SUPER active in the Black Power movement and it felt like a form of white washing, since Saldana is Hispanic. That, and they also colored Simone’s skin darker. Is it Blackface if the person doing it is not White? Eh, probably.

Because of all this and more, this film took a long time to come out. It was being filmed in the end of 2012, so it took years to release, possibly waiting for all the controversy to die down and maybe finally out thanks to the successful documentary. However, it seems like the distributors still wanted to bury it, with a very limited release and instant VOD. 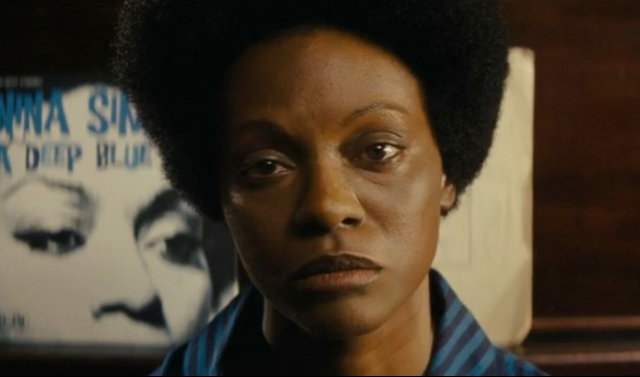 Nina Simone (Zoe Saldana) grew up like a normal black kid in a southern town. But some old white lady liked her and taught her how to play piano. She got really good at classical music and had a dream of playing at the Carnegie Hall and totally did as the first Black Jazz musician. She also went to Julliard. She made a lot of albums, mixing Jazz with Rock and Roll and Gospel and protest songs. She worked with Martin Luther King and a whole lot of other famous activists. She had an abusive husband/manager and a daughter.

Then, eventually, she left America to Paris to play, because America was too racist. And everything in the above paragraph was basically the first five minutes of the movie, told through newspaper headlines, and this film takes place all after that. Like, in the 1980’s, after she had already been out of America for a long time. She was put in a psychiatric hospital for a day in LA after threatening a lawyer with a gun, where she met Clifton Henderson (David Oyelowo), an orderly. She liked that he tried to help her, so she hired him as her assistant and took him back to France.

So she is a drunk and a jerk to him while he tries to help. She forces him to help her get one nigh stands and makes his life hell. But hey, he eventually gets her back into the US for a concert, despite no one wanting to work with her. Yay biography movie! 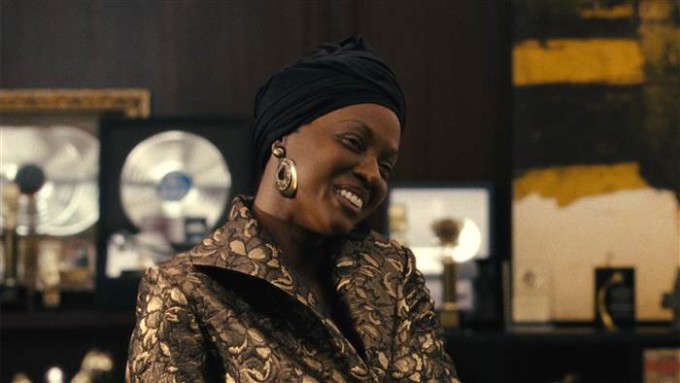 But Simone/Saldana loves that booze apparently!

I don’t plan on talking any more about the controversy. I mean, I’d say just let Saldana be her self with the fake nose and not go all out. The entire skin experience just felt distracting for the most part, because I recognized Saldana, except she was “off” the entire time. Just a distraction, just like the controversy.

But let’s focus on this trainwreck of a film. Simone has been the focus of several documentaries and part of a few more, but never a biography of her life. Out of people who deserve their own Hollywood bio film, Simone is definitely up there on the list. For whatever terrible reason, they focus on the late 80’s and early 90’s and none of the “good stuff” in her life.

Fuck. She was a domestic abuse victim for years and couldn’t get out of it. She made so many great songs and led amazing protests. She had a ton of achievements. And I only know any of this thanks to the documentary about her entire life. Most people in the current generations don’t know anything about her and will only learn this stuff through theatrical films. And they pick her lamest and a very unimportant part of her life. They ignore so many important points in her life and focus on such a small frame it just seems disrespectful.

It seems like the people who made this film hated Nina Simone and didn’t know how to hide it. They showed her as a terrible person and ignored how she got to the lowest point in her life. It is misleading and just…just so bizarre.

Watching Nina, I can only see huge amounts of wasted potential. Even if I didn’t see the documentary, this movie wouldn’t have excited me in any way. I would be left wondering what the heck happened. Why did this person get a movie? Why did Paris matter?

Nina is a mess of a film, and one of the worst biographical movies I have ever seen.