Garry Marshall is a man with a plan. He directs a lot of films, a lot of them women centric as well. From Beaches to Pretty Women to The Princess Diaries (and its sequel), he makes films about women for women.

But lately he has changed his mind. He has had holidays on his mind. Holidays with a lot of people and interconnecting plot lines. Yes, he is that guy. So he gave us Valentine’s Day, New Year’s Eve and now, Mother’s Day. There was a lot of hope that he would get super into this and give us weirder shit like Flag Day and Cinco De Mayo, but unfortunately he passed away this year and we only will get these three films.

I also could have reviewed this a long time ago. Like, end of 2016. I wanted to watch it and Bad Moms back to back, and so I watched them both to see if they would qualify for my Worst Films of 2016 list. And as you can tell, this one did not make it, it wasn’t that terrible, so instead, I just saved it for the next Mother’s Day instead.

That’s right. I am writing this in 2016. So if my site still exists in May? That would be nice. To date this review further, Obama is still president, I am 27 years old, and I have not seen The Belko Experiment yet. 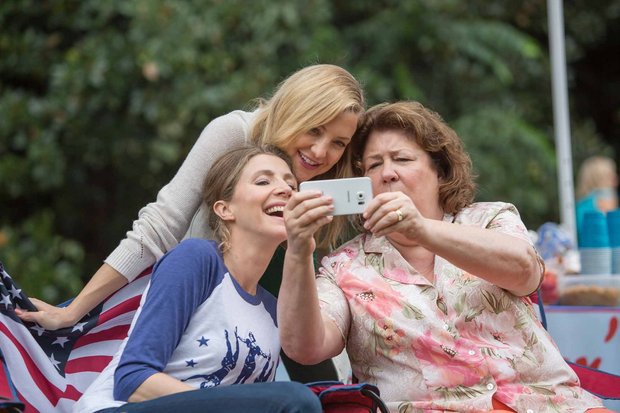 All of these actresses are currently alive at the time of my writing this as well.

Alright, big cast of characters here we go. And don’t worry, I already decided to not tag any of the kid actors.

Sandy (Jennifer Aniston) is divorced, with two kids, but she is still friends with her ex, Henry (Timothy Olyphant), and maybe curious about getting back together. Who knows. Oh wait! He is married now, to Tina (Shay Mitchell), a much younger woman. And the kids love her. And he wants them on Mother’s Day for a little bit too coming up, because hey step mom. Yayyy.

Bradley (Jason Sudeikis), is not a mother, but his wife (Jennifer Garner) is! Or was. She died, in the war, because she was a soldier. [NOTE: Garry Marshall loves having female soldiers in his movies]. He has two daughters, one of them in the mature age, but he just wants to wallow at home. He does still work, he runs a gym, and he has a large group of ladies (Loni Love, Lucy Walsh, Beth Kennedy, amongst others) who want to set him up with friends.

Jesse (Kate Hudson) and Gabi (Sarah Chalke) are sisters and sharing a house together, both working on families. Jesse is married to Russell (Aasif Mandvi) and they had a boy. Gabi is a lesbian, with her partner Max (Cameron Esposito). And their parents (Margo Martindale, Robert Pine) know nothing about the kid or the sexual preferences and show up to surprise them.

Let’s see, we also have Kristin (Britt Roberson), who was adopted and wants to learn about her mother. She is long term dating a guy (Jack Whitehall) and doesn’t want to get married despite having a kid with him. He is a stand up comic trying to win a local club event run by Wally Burn (Jon Lovitz).

And a famous lady who sells jewelry on TV? That is who Julia Roberts plays. 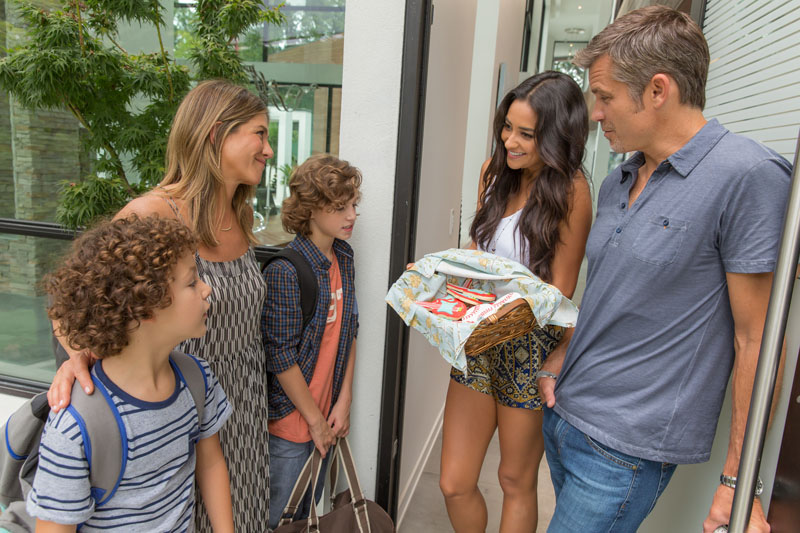 She is worried her boys might see too much of their new step-mom.

Mother’s Day is exactly as one would expect it. Four or five plot lines, all briefly interconnecting in a big city, all around the holiday of Mother’s Day.

And unfortunately for me, my favorite character was played by Sudeikis. The only of the leads to be a man. And yes, it is because I could relate to him most of all. But also Sudeikis makes me happy in most of larger films, so it is just more him and less me being lame and not relating to women.

Aniston’s plot line was a bit more annoying, as it made Olyphant out to be such a bad guy because it was from her point of view, when it is obvious she is overreacting and getting on our nerves. The “old fashioned parents” being anti-everything also felt awkward in this movie. Character Actress Margo Martindale was such a bad person in the film and she technically never really got better. It ends with her happily telling racist jokes to Russell’s mom basically.

But the good news is? It is still way better than Moms’ Night Out.