I expected to hate Jem and Jem and the Holograms going into the screening. That is why I picked it! I make an end of the year worst movies list, and based on the trailers alone, this one seemed like it could maybe even contend for the number one spot. Those trailers were awful. I didn’t even watch the cartoon show of the same name, but I could tell it was nothing like the cartoon.

It looked like it wanted to be a made for TV movie on ABC Family, only a step above a Lifetime original film.

So yeah, the film had a lot of work in front of it before it even began, which is a shame. But hey, maybe Jon M. Chu, famed director of such film classics like, Justin Beiber: Never Say Never, Justin Bieber’s Believe, G.I. Joe: Retailiation, and some shitty Step Up movies could be its saving grace.

Don’t look at me with those disbelieving eyes.

Jerrica (Aubrey Peeples) is your average 18 year old girl. About to finish high school, living with her aunt (Molly Ringwald), sister Kimber (Stefanie Scott), and two foster sisters, Shana (Aurora Perrineau) and Aja (Hayley Kiyoko). Okay, so she isn’t normal. But they all like to sing and play music so that is something fun. To bad Jerrica is super shy and would never do anything about it.

Until, you know, she does. After getting all emotional about the fact that they may lose their home, Jerrica puts on make up, a wig, and writes a song about loneliness under the stage name Jem. Her sister tricks her and uploads the performance to the YouTubes and somehow it goes viral. It goes so viral that Erica Raymond (Juliette Lewis), CEO of a made up big record company is offering her a small contract to play a few shows. She is super interested in her mysteriousness and plans to exploit it for maximum monetary viral wealth!

The girls are fine with it, transporting them all the way to LA where they have to learn how to be “rock stars”. It is important to note that their dad (Barnaby Carpenter) died when Jerrica was around 7 or 8. He was working on building a robot called 51N3RG.Y (pronounced Synergy), and he left it unfinished due to his sudden death. She likes to carry it around and stuff.

We need more dudes in this movie, which is why we have Ryan Guzman playing their “caretaker” and watcher to make sure they don’t get into trouble while in LA, Nathan Moore as a driver/bodyguard like person, and Ryan Hansen as a cameo as a security guard. 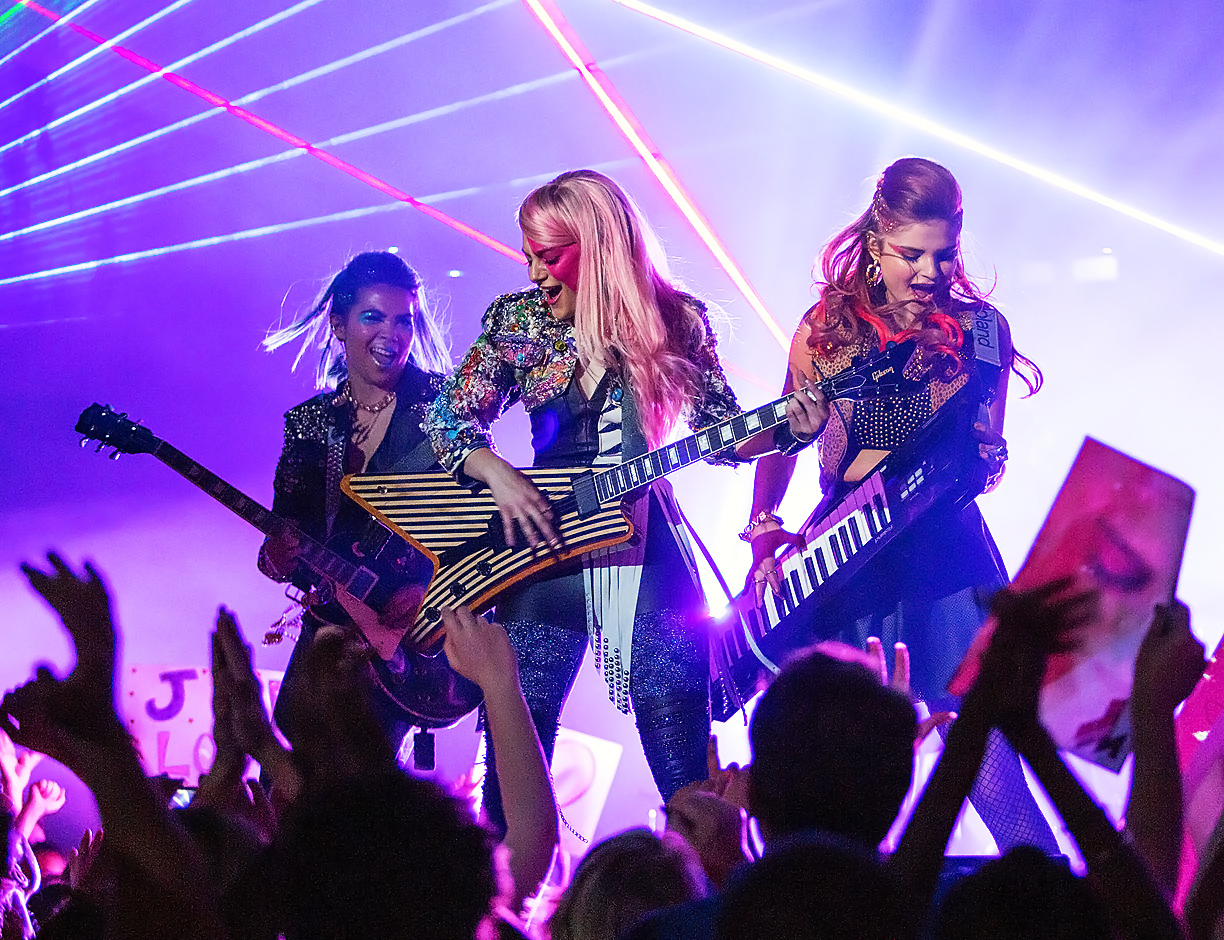 I have been told that Woody Allen cameo’s as the keytar.

Jem and the Holograms was not the worst movie of the year. Was it bad? Certifiably in every way. But it wasn’t a full on 100% cringefest.

First of all, the movie had no idea what it wanted to be. It goes from teenage sudden stardom film, to a long scene involving the Synergy, looking like it was taken directly from Earth To Echo. The scenes with the robot become a strange Sci-Fi Mystery throughout LA. Other parts of the movie literally seem to be almost identical to Justin Bieber: Never Say Never. I of course recognize that because I actually saw that concert doc. The plot is like a bad mash up of Hannah Montana and Josie and the Pussycats. Lewis overacted and was playing a non funny Parker Posey in that film I just mentioned.

That’s not all. It awkwardly referred to the band as a rock band, but they only sang pop songs. The song that went viral had absolutely no reason to go viral, realistically it would have never happened. They should have made it a much bigger deal. The fans she gained from the song would have hated every other thing she did, because the few songs after were nothing a like and very fake feeling.

A character says he hates newer bands because they are all auto tuned crap. The response? They sing a song a capella, but it also is processed and you can tell it doesn’t sound remotely real. Literally this happens right after the complaint about that. How can they do that to us? Related, another moment during the movie in a song, they lose power and finish it again, without instruments. The awkward echo during the song is still somehow apparent, although it doesn’t make sense to be sung.

Here is a picture of an attractive male to break up my bitchin’.

One more major annoyance, this one is a SPOILER. Part of the plot to get out of the bad contract that breaks up the friends involves a will a character never knew existed. They steal the will and when it becomes apparent, without even showing it, they just mention part of it, and suddenly everyone changes what they were doing and they win the day. Not actually proving anything, just saying vague things. The bad character says something like, “You don’t even have the will, only I do!” The whole movie (and for years) it was in a safe, but for some reason she was randomly carrying the packet in her hands at that moment? Similarly, the dialogue was generally always terrible.

But it DID have some moments. Miraculously, out of no where, I found myself crying at a beautiful moment. I blame my newborn baby on that. Every time recently a film has had any sort of emotional “Father Daughter” moment, it affects me deeply. Also, there were some good songs. “Way I Was” was pretty damn good and the only thing similar to the original viral hit.

This movie is objectively bad. But, damn it, it has its moments.