Well, originally sure. But I really wanted to make sure my number of posts was equal to my number of reviewed movies. Easier for me to keep track of.

So my 300th movie review will be three movies that I count as one, and will just call them different Acts. If you missed it, here are my 150th, 200th, and 250th reviews. Why is this not the next twilight movie? Because I will be damned if I watch that in theaters where people can see me. Nope, alone in the room is the only way to go. 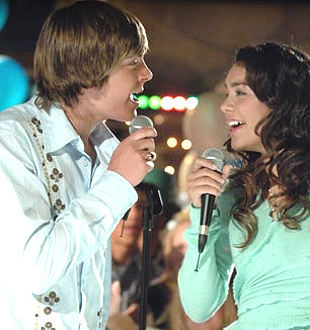 This story begins not in a high school. Our star, basketball hot shot Zac Efron (Troy) is at a ski resort for New Years. He just wants to play basketball with his dad, but his mom makes him go to a youth social. That is where he randomly has to perform a duet with Vanessa Hudgens (Gabrielle), who is nerdy. Neither wants to, but it turns out they both kick ass and sing well together. If only they hadn’t just met.

NOW TO HIGH SCHOOL. Oh man, Gabrielle randomly transfers to their high school. Awkward. No one knows Troy sings. He quickly sticks with his own group and friend, Corbin Bleu (Chad), and she gets an overachieving friend, Monique Coleman (Taylor). This is already too much plot. They get forced to try out to sing in the Spring musical kind of, much to the dismay of Ashley Tisdale (Sharpay) and Lucas Grabeel (Ryan), twins who run the theater at this school. But maybe if the composer, Olesya Rulin (Kelsi) can write the perfect duet, they can out perform the twins and get the lead roles. Even if the callbacks are during the championship game, and the quiz bowl thing.

My favorite song from this was “When There Was Me And You” by Gabrielle. Pretty much everything she sings is way too good for most of the other people, since they focus less on gimicks. This takes place after the friends have successfully tricked Troy into locker room talk, and saying he doesn’t care about her. Because boys with feelings are dumb! So the school is stoked, so he can “Keep his head in the game” and win the state championship! And she is all wtf. (This is after they make callbacks, but before they happen. Yes they fix it before callbacks).

The worst song in this movie has got to be “Stick To The Status Quo” sung by everyone not Troy/Gabrielle. First, it takes place in the worst looking cafeteria ever (not practical, but they use that in each movie). Second, the message is horrible (on purpose, obviously). If you don’t feel like watching, it is people who are now willing to talk about their weirder passions, since Troy is a singer now, and everyone telling them to keep that shit inside. Bury it way deep. Cant be cool if you step outside the bounds.

Also, fun fact. In a South Park making fun of this, they show a scene from the first movie…and I thought it was fake. But that shit is pretty much identical to this song.

Yay everything from the first one worked out and nothing happens this movie! Just kidding. Taking place almost immediately after, the only High School part of this movie is the beginning (opposite of the last one). No, it is summer. Much like what the first song will drill into your head. But everyone has to get a job. Everyone. And because Troy is a big star now, they all can get jobs at the country club where the Twins planned on relaxing in peace.

WELL TOO BAD. YOU NOW HAVE THE WHOLE HIGH SCHOOL THERE. And eventually a musical is going to happen there too. Troy keeps getting all these awesome gigs, because he is awesome, and gets farther away from his friends, stuck with shitty jobs. Until he realizes that, and fixes it, and everyone has a good time again. Except for the Twins.

Worst Song?
I have to do the Worst Song first, because it happens early on. This is woman twin, being the worst kind of person ever. But the song “Fabulous” seems like it was written for the most stereotypical gay guy ever, not her. Either way. Holy shit is this character not only a Bitch, bu clearly way too annoying. Next thing you know she will get her own spinoff.
Other Worst Song?
Hah. Just kidding. As you will find out I HATE this movie. Either way, this is another early song. All the people are mad that they have shitty jobs, but don’t worry. Why don’t worry? Because Troy isn’t worried. It will all be good. They just have to “Work This Out”, together. (And as you know, it works out for him, not them. FORESHADOWING!!)

High School Musical – Act 3
Ah, summer is over…and well shit. This one begins the final basketball game of Senior year. Afterall, they don’t care anymore that a guy can sing and play ball. Its all good.

What bugs me though is they make it seem like Troy is a freshman in the first movie. Made it seem like he was the youngest on the team. BUT NOW THEY ARE ALL SENIORS SO WHO CARES. Because now they won two years in a row. So to celebrate after the season, of course another musical is in the works. But this time after this is college. Where will people go? Gabrielle is smart and got into Stanford! Troy is not smart, and his parents want him to go to their old school and play ball.

But wait there is more! Julliard also will be coming by to watch the final musical. Why? Because they have only one scholarship for between Ryan/Sharpay/Troy/Kelsi (for composing). Yes. They are all being looked at, just them four, for one spot. No, that doesn’t make any sense. But whatever.

Anyways. In this movie, they almost break up again and have prom, and eventually all decide on their future. Troy picks a college for ball AND theater, near Stanford. Ryan and Kelsi both get into Julliard, and Sharpay sucks. Because she is mean.

Worst Song?
Maybe it is just everytime they try to be all hip and rap kind of, but songs like “The Boys Are Back” in these movies make me cringe. The background music is terrible, so is the song in general. Only positive is that this clip is in HD and some of the dancing is cool. This is them pumping each other up, to make their own decisions, or something.

Well, as I said, I hate the second movie. HSM2 was SO MUCH worse than the first one, it hurts me that it broke all those records due to hype alone. Because it was bad. Every song. Here is a link to a third one, Humuhumunukuapua’a, that is just WTF. It like that movie is a nice piece of shit, and a 0.

The third movie had a bigger budget, and therefore could do bigger/crazier numbers with their song. And they did. But too much. What was seriously wrong with the finale is that the plot was stupid. The final musical was supposed to just be them, doing high school things. So it had a song about prepping for Prom, and graduating, and shit. A different graduation song than the one above. It was stupid to watch. People in the audience would have left if they actually watched what we got to see. Especially the graduation song they did. Very awkward to single out the people and tell them of their scholarships. Very 1 rating.

The first one, however? It wasn’t all that bad. Especially for a TV movie. I mean, even the song I think is the worse at least has a decent enough beat and lyrics going on it. They probably spent a lot more time on the songs here, especially all the ones with Troy and Gabrielle. The plot, very kid feeling. Theres no way the ending conflict could have happened. Instead they would have said “Hey. Don’t change the callback dates. We have this game and this math shit to go to.” and problem solved. But the chemistry between the leads was great. So I’d call that a 2.

Final final thoughts:
I had to remind myself a lot that the twin characters were supposed to be twins, not lovers. It was a fine line in these movies. I linked three extra people up there, because their characters really don’t matter much. But the composer chick? She is stupid hot. Musicals about musicals shouldn’t be allowed. After Phantom of the Opera did it, it was fine, but now it is just creepy.
2, 0, 1 out of 4.
Tags:0 out of 4, 1 out of 4, 2 out of 4, Ashley Tisdale, Corbin Bleu, Family, High School Musical, Lucas Grabeel, Milestone Review, Monique Coleman, Musical, Olesya Rulin, Vanessa Hudgens, Zac Efron