Hellboy II: The Golden Army made one of the worst mistakes ever. The worst being releasing your movie the same date as The Dark Knight.

So instead it id the second or third worst mistake ever. It released in theaters the week before The Dark Knight. Sure, all the fanboys would go to see both. But people who only watch once a month, or random viewers who had to choose between two “comic book movies” meant Hellboy II would lose every time.

This is a shame, because Hellboy II ended up being better than Hellboy in every way. (If I had to review Hellboy, I’d probably give it a 2 out of 4. Interesting, but not my favorite. Cool concept, falls short.) 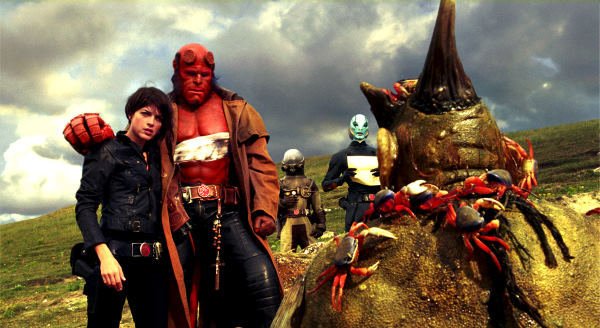 That outfit? All make up, no CGI. What!?

Hellboy (Ron Perlman) is up to his same antics. He hates being locked away, wants to be free. Liz Sherman (Selma Blair), who can ignite herself and other objects on fire, is now his “girlfriend”, but they are fighting as they live together. Why? Because she is pregnant (awkward). It is causing things in the B.P.R.D. to be quite a mess. Abe (Doug Jones), the fish man and Tom (Jeffrey Tambor), the director, are worried the antics will cost them jobs.

Well Prince Nuada (Luke Goss), an ancient elf is pissed off. He wants to return to the surface world, reignite the golden army of indestructible robots, and kill all humans. His race disagrees, so he kills a bunch of them. Not his twin sister, Princess Nuala (Anna Walton) though, because if one of them gets hurt, so does the other. So he causes problems and Hellboy uses this opportunity to join the world!

This causes a new director to come in, Johann Krauss (Voiced by Seth MacFarlane), an old being who is now all gaseous and shit. And German. Now they have to run things by the book, and figure out how to find out whats going on with the elves. 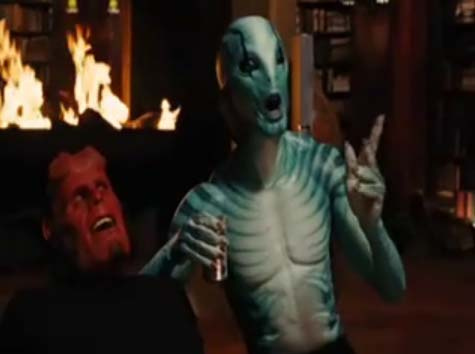 And probably the best version of “Can’t Smile Without You” of all time!

As expected, I loved this movie. As I said, the action is better, the story is better (general rule in the sequel, since you don’t have to waste as much time with origins), it is funnier, and introduces great new characters.

It might be closer to the comics too, but I still haven’t read them. I am anxiously waiting an ending to the saga with a Hellboy III. It might be a few years from now, but they keep claiming he will eventually destroy the world, as that is why he was summoned in the first place, so that shit needs to almost happen.

Oh yeah, and I am pretty sure Hellboy is how Ron Perlman normally looks, and every other time is him in make up.