This is the small tagline I saw for the movie Flypaper, and I thought hey! That could be swell. Especially with a pun like that. 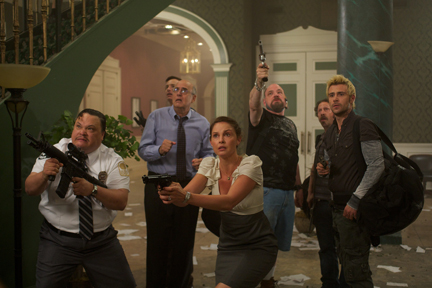 Especially if apparently everyone has guns.

The movie begins with Patrick Dempsey walking all up in the bank, looking for change for a $100. He is a weird guy, that Dempsey. Asking for it in very specific amounts of dimes, nickles, and quarters. Ashley Judd, the bank attendant that he is attracted to, is discouraged, but gives him change anyways. He seems suspicious! But right as he is about to leave, he notices weird shit, and OH NO, BANK ROBBERY ABOUT TO HAPPEN!

One very professional group of bank robbers (featuring John Ventimiglia). One made up of two hillbillies (featuring Tim Blake Nelson). Also, among the hostages are security consultant Curtis Armstrong (or Booger, if you prefer) and Jeffrey Tambor.

But when things start to go wrong? Its up to Dempsey and his lack of pills to try and get himself out of this crazy situation.

Now that’s what I call a “sticky situation!”

I laughed a whole bunch in this movie. People were eccentric enough to be funny, but not too crazy to be annoying or completely unbelievable. Dempsey got a little bit crazy in the movie too, with his unknown social conditions making it hard for him to not think about everything going on. One great scene had him on the ground yelling, thanks to other peoples weird actions. The ending might have been a little bit rushed, but I was fine with it. Bunch of people die too, BUT WHO? AND WHY?

It reminded me of, in a weird way, the movie Clue. This one only has one ending, however.