Final Destination 5? The Final Final Destination? (No, not really. Apparently if this did well, there’d be two filmed at the same time? Not sure if that has been decided yet.) As far as I know though, it doesn’t really matter. You can always make a new movie about a group of people who escape death, and end up dying in gruesome ways. Pretty much writes itself! 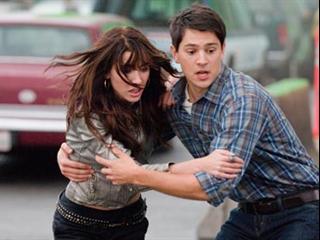 Don’t look too shocked. Your role could have been done by anyone!

What is the big event this time? A bridge collapse. The main group of people all work for or are related to people at some company going on an outing. A nice bus and all. The main character is Nicholas D’Agosto. He has a vision of most everyone die, except for his girlfriend Emma Bell, who he manages to save. Needless to say, after he sees all this, he freaks out and saves some people from the bus (the others are like, what?). This includes his good friend, Miles Fisher, his lady friend, Ellen Wroe, and the guy at the office no one likes, P.J. Byrne. We also have hot office mate, Jacqueline MacInnes Wood, new guy who runs the factory despite age, Arlen Escarpeta, and everyone’s boss, David Koechner! Eight in all.

Eight? That’s a pretty good number of people who are going to probably die then. There is also the detective assigned to the case, Courtney B. Vance, who I only remember from being in that one season of FlashForward.

As you all know, I am not a usual horror watcher. But nothing else is really coming out this week, so I said screw it. The only other FD I have seen was the second one, and parts of the third. General knowledge of the first. I was told that this one relates to the others, and it is good to see them. But I don’t want to see them!

So I did the next best thing, read the plot outlines on Wikipedia! Do not do this. The plot outlines, in an attempt to relate all the movies, kind of spoil the ending of this movie. I didn’t know I had it spoiled, until the ending happened. And went “Oh! That was the twist! Well shit.”

For shame Wiki. For shame.

Who dies while getting a massage? Seriously?

So, I was sufficiently scared during this movie, I think. I definitely found everything to be pretty gruesome, which makes me mad that I watched this during lunch time. Filmmakers did a good job of throwing a lot of red herrings at our faces, trying to figure out just how they would die. Usually you’d be wrong.

That gymnastics scene in particular was the biggest tease. I also disliked that during the credits, they showed footage of the other movie deaths all back to back and crazy, probably just to give the 3D viewers and extra whoa! I didn’t need it all at once though, myself.

I think fans of the series would enjoy this one. The acting wasn’t the best, but I cared enough about some of the characters to make me hope they’d survive. Damn death.