Presidents in the modern era meet with almost everyone. Celebrities, athletes, civil rights leaders, union leaders, foreign leaders, gym leaders, you name it. So it isn’t weird to see a picture of Obama hanging out with Justin Bieber.

But maybe back in the day it was a bit more odd. Like, a famous picture of Elvis Presley shaking hands with Richard Nixon. One of the biggest entertainers of the last few decades and a president with a lot of…well, character, I guess. It was a really famous image and sort of set the country into jubilee at just the thought of these two larger than life men in a single room talking about who knows what.

And just what led to this monumental meet up and what did they talk about?

Well, it would take a movie named Elvis & Nixon to get to the bottom of it I suppose!

This really just feels like fanfiction. Who wrote this? When do they get undressed?

In 1970, the US was in disarray. There was a war going on that not everyone loved, the parties were divided, drugs were big in the news and in our suburbs. Basically, not too different from today.

But one man was sick and tired of it all. His name was Elvis Presley (Michael Shannon). He was tired of these drugs, these gang fights, people stoned at concerts. He was in the army before and people loved him, so he figured he could go undercover as himself, into their events and protests. And maybe convince them to say no to drugs and put an end to it all. He could be a really big help, hell, he knew karate!

So he wants to head to the White House. He has a damn plan. He will talk to President Richard Nixon (Kevin Spacey), he will convince him to swear him in as a federal agent at large to work secretly for the Bureau of Narcotics and Dangerous Drugs. Brilliant, great, wonderful. Except Nixon didn’t care to meet with him. Even if a meeting could boost his popularity with the youth and the south. Except Elvis doesn’t want to hold a concert, he wants it all to be a secret, no publicity.

Sure, these men might not see eye to eye, but they want similar things, so maybe they can work together. Or maybe their assistants and staff can force them to work together. On Elvis’ side, we have Jerry (Alex Pettyfer) and Sonny (Johnny Knoxville), with Jerry trying to get out of working with Elvis to focus on his own life and maybe engagement. The president aides include Krogh (Colin Hanks) and Chapin (Evan Peters), both people later involved with the Watergate scandal, fun fact!

And so yeah, the meeting is of course them setting everything up and what their conversation may have entailed in that mysterious room. 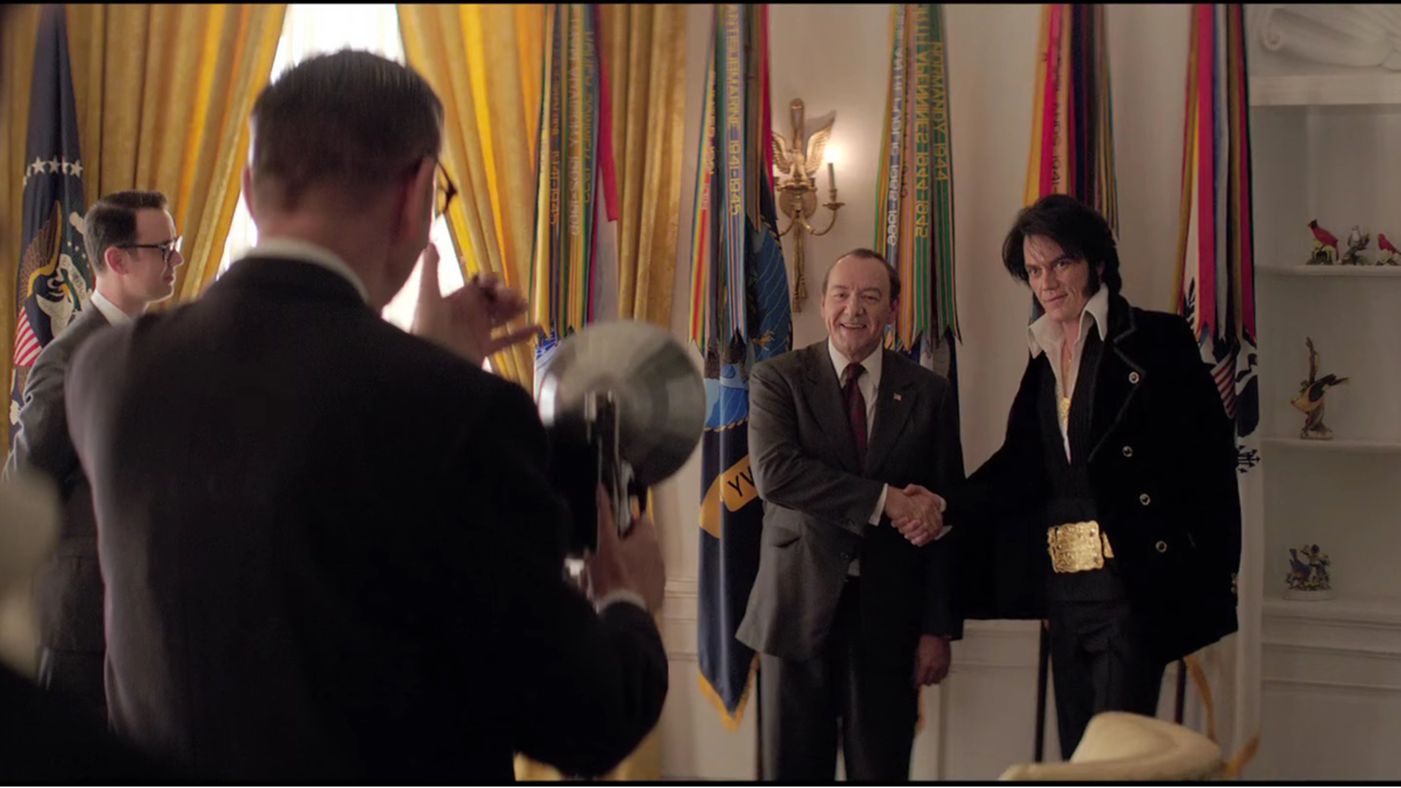 Here is a picture of a recreation of that picture!

Two powerhouse men can only be played by two powerhouse actors, and we certainly get that with Shannon and Spacey. When I saw the casting, I was almost flabbergasted with excitement. To repeat, almost flabbergasted, not fully flabbered nor gasted. Despite loving each actor from many of their recent and older roles, I still found both of them hard to see in their collective role.

Now, in this film, they both did great jobs. But Shannon has such a unique face, I never really fully believed he was Elvis, he was always an actor. Basically the same for Spacey. For both of these roles, it could be due to the fact that these characters over time have become very exaggerated and in real life they weren’t so intense, but it just never really fully clicked.

The story itself is decently amusing. The cast of characters while small added a lot to the film. The movie is also under 90 minutes long, so it never drags and a good third or more to it is actually focused on their actual discussion in the white house.

The film just has a lot of build up for this moment and honestly, doesn’t go too many places. Elvis & Nixon won’t take up a lot of time and is pretty amusing. Hell, you will learn a lot about an event that is just all sorts of weird in American history. But one that never really elevated more than cool tidbit.