Miraculously, Chasing Mavericks is not a story about John McCain and his quest for presidential glory. Nor is this about an unbranded calf (definition on google). Apparently it is a local Californian term for a mythical giant wave that actually occurs somewhere near Santa Cruz!

Ah yes, the legend of the big wave. Only the coolest of surfers could be cool enough to surf them. 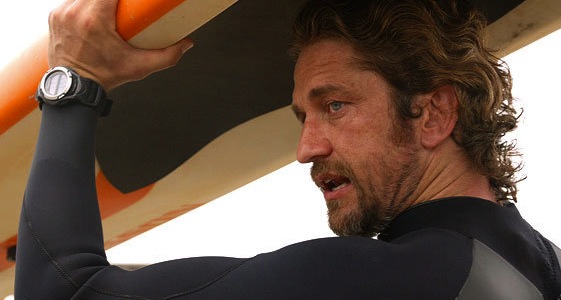 As awesome as Butler? We will see. You might be able to surf on his hair.

The story of Jay Moriarity (Jonny Weston) is one based around the ocean. He had it tough growing up. His dad left him when they were young, his mother (Elisabeth Shue) is bad with money and cannot hold down a job. But hey, as long as he has his surfboard, he is a happy man.

He was actually saved as a kid after falling in the waves, by one of his neighbors, Frosty Hesson (Gerard Butler). A successful handy man with a wife (Abigail Spencer) and kids, he told her he would give up surfing the big waves, but still does it anyways. Not like lying has ever gotten anyone in trouble.

Ever since that day, Jay has been fascinated with the waves. But one day he finds the secret cove where Mavericks form, hidden away and yet being surfed on by his beighbor! The biggest waves he has ever seen and some nice pointy rocks. Well he says he wants to surf on them, and eventually convinces Frosty to train him. He agrees to train his mental, physical, spiritual, and emotional sides in order to conquer these beasts. At the same time he is attempting to woo his favorite girl (Leven Rambin) by being a great friend. Hah.

This also takes place during the 1990s El Nino, fucking everything up, meaning it is making crazier, bigger waves. So big, the secret area is no longer that secretive and a lot of people (amateurs) show up to conquer the mavericks, creating a huge potential for death. 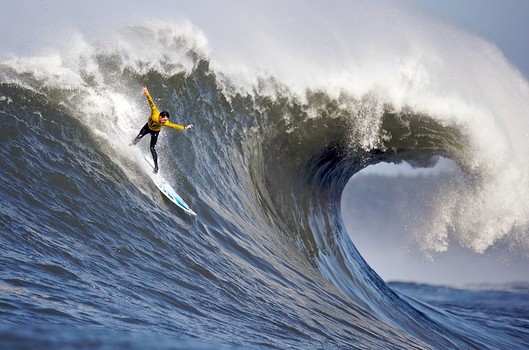 I am now going to call tidal waves “huge potentials for death” from now on.

If you didn’t know, Jay Moriarity is an actual person, and this is his biographical movie. So if you click that wiki link, there will be some spoilers. Basically, he is considered a soul surfer, someone who surfs for the love of it only and is not to be confused with the other recent biographical surfing movie, Soul Surfer. He was made famous thanks to a photographer capturing his picture at the top of a Maverick crest.

But enough history, the movie itself? Typical feel good sports training film. You know how it will end, he will surf the wave. If you know the actual person, you will be aware of other events that happen in the film too. The only other feature this movie might have for entertainment purposes would be cool surfing scenes. I would describe them as “okay.”

For some reason, Chasing Mavericks has an incredibly slow feeling. It begins with a quote that doesn’t make too much sense, and ends with a scene that feels forced and awkward. There might be some inspirational moments in here that speak to certain people, but all in all, the fact that this was a real kid isn’t even that impressive. I’d say it offers not much in the film world, and it makes me wonder if there are any good surfing movies out there.