After the very recent disappointing musical that I saw, I quickly began looking at the other musicals to come out this year that might be of interest.

So Begin Again is a smaller musical coming out this year. I am not getting my hopes up that it will be a traditional musical in any way, because it is begin directed by John Carney. Carney brought us Once about five years ago, and although it was turned into a Broadway musical, the movie version is very musical lite. Just a few songs and a lot of emotion.

I can only assume this will be similar. 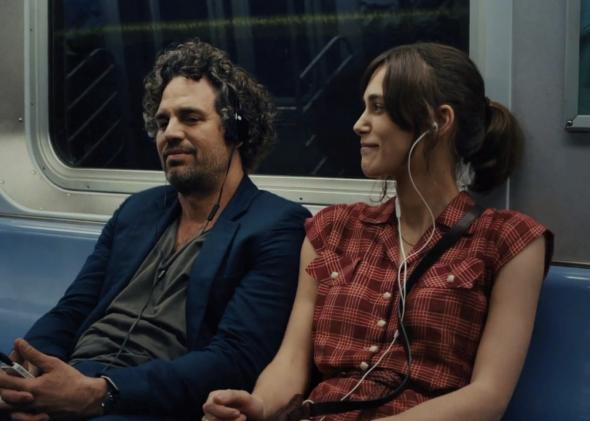 Try to say the movie title five times fast. Hell, just try to say it once.

Begin Again is a story about love, music, and losing it all.

Like Dan (Mark Ruffalo) who has lost it all, his love and music. He is getting outted at the record company he made with friend Saul (Mos Def) for not being able to bring in a successful act for several years. He also is living alone, his ex wife (Catherine Keener) has custody of their teenage daughter Violet (Hailee Steinfeld). He has lost everything he has ever loved, until he hears a sound…

Like the sound of Greta (Kiera Knightley) reluctantly performing on an Open Mic night because her friend (James Corden) forced her too. She is having a rough time as well. She moved over to New York with her boyfriend Dave (Adam Levine). Dave and Greta are song writers together, but a song Dave sang was featured in a popular movie, so now they want to sign him to a contract. Yay success, but boo the price that fame brings.

Dan hopes that Greta will be able to get his life back on the right track in every direction.

Maybe they will also make some sweet and sexy music too, along the way.

Also, CeeLo Green is in this movie for a small part, so we can have half of the original The Voice judges in here. 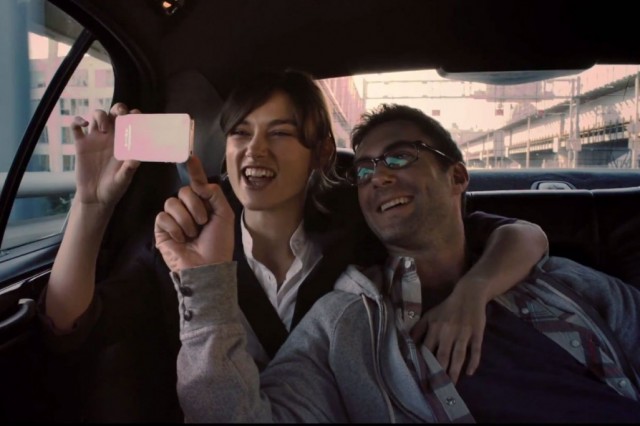 Just like how they totally didn’t make this scene for Apple product placement, I am using this picture for the same not reason.

As expected, in this movie music plays a central role in almost every scene, but it isn’t a standard musical. No one is singing and dancing throughout the streets (kind of). Although, there is copious amounts of singing, dancing, and listening to music in the streets, it is all completely natural. All performances are performances, whether on a stage, in a “sound studio” or at home with a small recording device.

The music is also really fucking good. I don’t remember how much music was in Once, because I mostly just remember that one famous song, but Begin Again has a crap load of songs. And it is more than just artsy fartsy indie music too! I am not saying it is completely diverse, but it is there. Each song felt great. The soundtrack of regular background music also felt pretty unique.

Basically, I am saying that I am mad the soundtrack isn’t out yet because I want it hard.

The acting was pretty good as well. I mean that in regards to Knightley/Ruffalo/Steinfeld mostly. I am happy that Steinfeld is finally in a good role that can showcase her talent, unlike her last few movies. Ruffalo did give off a kind of creepy vibe for about half the movie to me. And this is completely different side of Knightley that we haven’t really seen before. I mean, singing songs!

I wouldn’t describe anyone else as being that spectacular. Most of the other side roles could have been anyone, including Levine’s character.

Overall, this is a fantastic movie, and personally, I liked it a lot more than Once. But then again, I only saw Once once, and I was way more immature then.