Alright. It has been done before. But by the British, and no one likes the British. So an American version might be more crude, or at the very least, better graphics. I’m talking 3D stuff. Or at least flashy lights. It is a Zombieland after all. 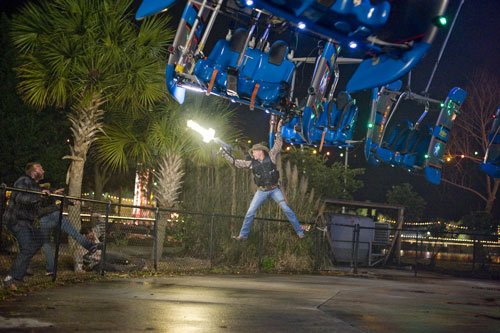 How did the zombie outbreak happen? Some bad meat or something, but it spread quickly like all zombie out breaks. And these get to be the weird ass fast zombies. Thankfully our hero, Columbus (Jesse Eisenberg) has a list of rules to keep him alive. Work out his cardio, be afraid of bathrooms, always wear a seatbelt, double tap to assure death, etc. Definitely don’t be a hero. This is a war! Because he was a nerdy shut in, he missed out a lot on the initial craziness, when his neighbor from 406 (Amber Heard) attacked him. Sucks, because she was hot too.

He meets Tallahassee (Woody Harrelson), a middle aged man who wasn’t good at much, but turns out is very good at killing zombies. They have code name in order to not get close to each other. Such as where they are from or where they are heading. He is a simple man, who just wants to survive, and really find a twinkie to eat.

They meet Wichita (Emma Stone) and Little Rock (Abigail Breslin), who con them out of their vehicle and weapons. Shit is serious. Very rude. The rest of the movie involves them working to get their car back, possibly trusting strangers, and maybe even breaking a rule or two.

Oh, and there is a cameo by Bill Murray, which is great. Especially since I only like Murray when he is in cameo form. 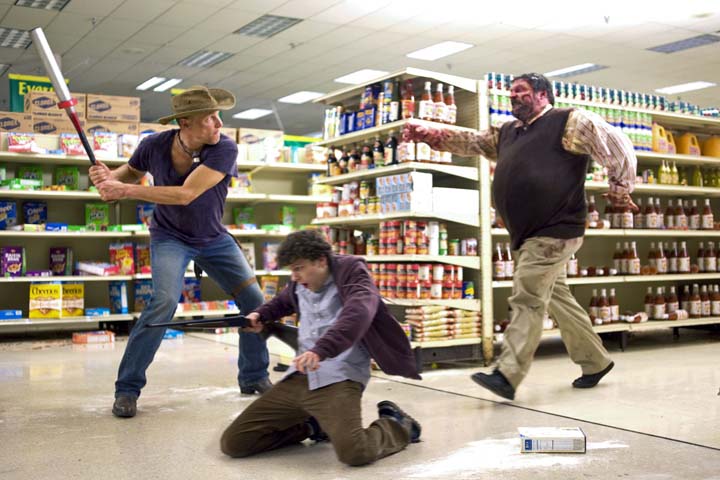 Good things tend to happen when you take an already outrageous accepted genre and do outrageous things during it. Most of the jokes don’t come from dialogue, they come from the few actors in this movie behaving to real zombie situations. Turns out it can be amusing to watch a bunch of fat zombies in a grocery store getting their heads knocked off with a bat. Or riding in a roller coaster with a shotgun. Or hitting a zombie by driving by with the door open, for shits and giggles.

The plot of the movie pretty much boils down to “The world has zombie now, it sucks, try to survive”. Really the only plot I could give was just back story that we learn throughout the movie, since I don’t want to actually say the entire story. That’d be bad for the four of you who haven’t seen Zombieland.

Its a very enjoyable movie with a budget big enough to put on some pretty over the top awesome scenes.