What? What’s that? It isn’t actually going to answer this question? Fuckers. No. The Theory Of Everything is actually a biographical romance film about Stephen Hawking. Yes, the Stephen Hawking. That makes sense that he would have a biographical movie I guess. He is a really smart and well known individual and given his conditions it would allow for some sexy sexy acting to occur. But I always feel weird watching a biographical film when the person in question is still alive. What if he still does something super fucking awesome, like, maybe finding an actual Theory of Everything? This film will feel like such a waste at that point. They’d have to do another one to include that monumental occasion.

What? What’s that? This movie isn’t entirely about Stephen Hawking?

Shit, let’s just get the plot details out then so I can stop making assumptions. 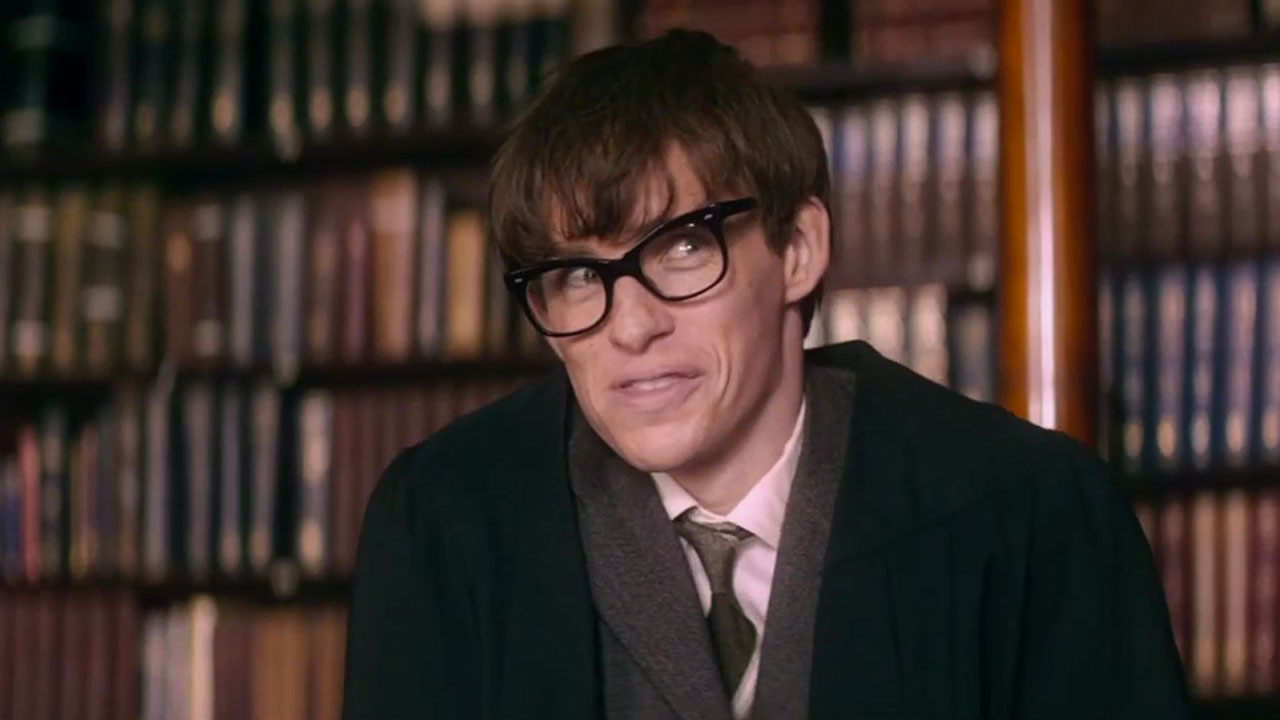 Although, with that grin, I am pretty sure I know who farted.

This film starts us off in the roaring 1960s at Cambridge. That is in the UK, for those non worldly readers out there. Stephen (Eddie Redmayne) is just a physics PhD student who doesn’t know what he wants to study! He is definitely smarter than the rest of his colleagues, everyone knows it. Especially Professor Sciama (David Thewlis), the most important person who needs to know that information, and he encourages Stephen to see a few exciting talks and labs that they have to offer for research projects.

But Stephen finds himself interested in something else. Namely, the body, voice, and brain of one Jane (Felicity Jones), a literature student who hopes to one day maybe get a PhD herself. For whatever reason, she sees something in his goofy face and is pretty sure she loves him back.

And then, a motor neuron disease starts to take hold. His legs and hands stop working as well as they used to be. Walking is hard. Writing is hard. Living is hard. He is becoming slowly paralyzed, his entire body, with about 2 years left to live. Jane doesn’t care. She wants to work through it with him. So in his last 2 years, he gets his PhD, gets married, and has a child! But then he is still alive.

And well, obviously, alive to this day.

Also featuring Charlie Cox and Emily Watson as two different caretakers for Mr. Hawking and are in his life way more than you’d might expect, and for different reasons. 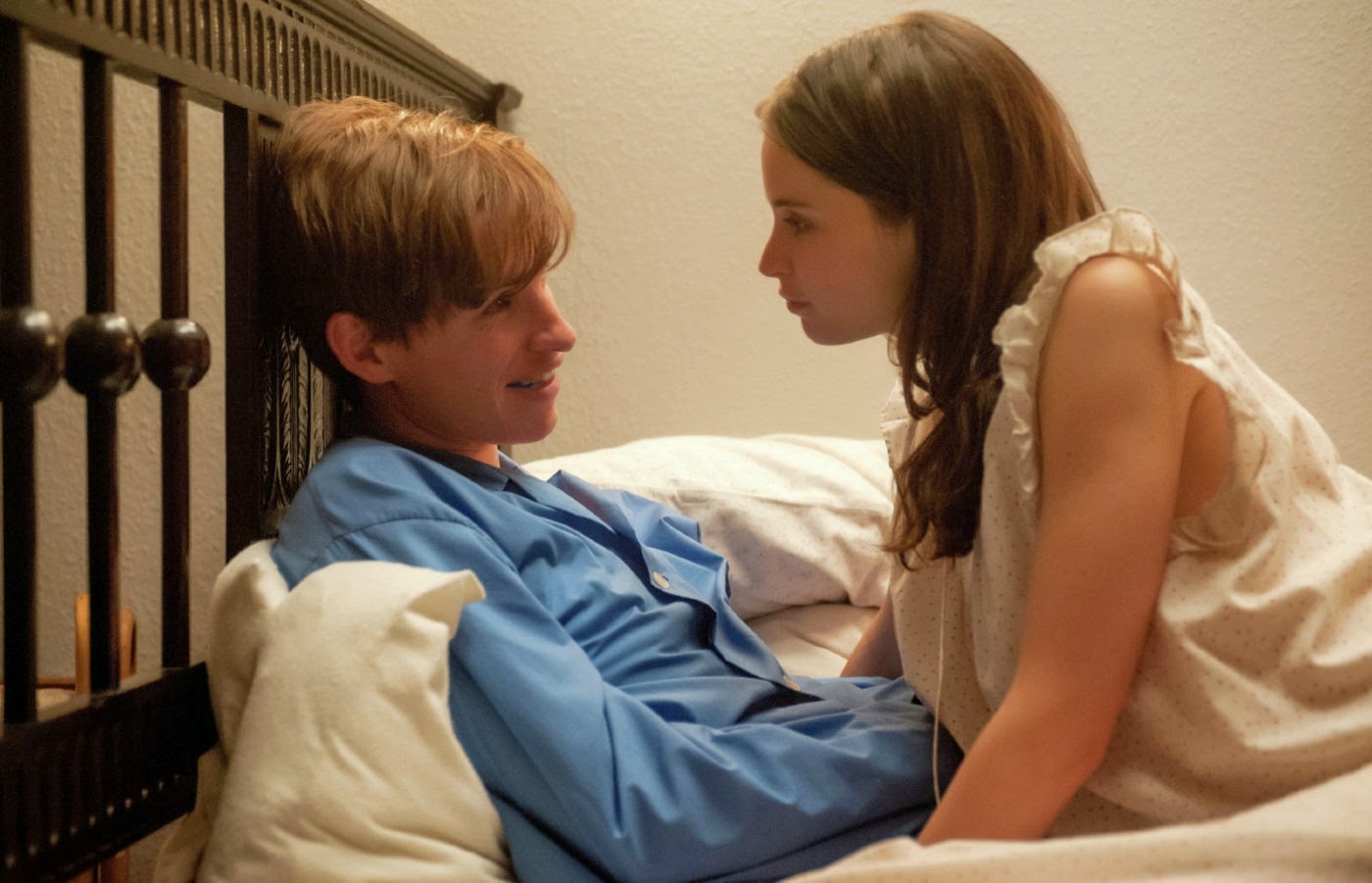 Paralyzed yet still made 3 kids? Yeah, not everything turns off down there.

Alright, first thing you may have thought about when hearing this movie was My Left Foot. Or at least that is what I did. Daniel Day-Lewis, the master actor that he is, gave an incredibly performance of a crippled individual and won many praises for it. Eddie Redmayne will win very very similar praises.

Whether it is strong enough on its own to win overall? I doubt it, although it is still incredibly impressive. Also impressive? Felicity Jones. She had a lot to do with this film as well, and nothing felt forced or fake from her. It was also a great performance.

My biggest issue with this story is that it is based on a memoir from Jane Hawking, and thus most of the focus is on them and not Stephen Hawking. That’s right, this is technically more of a Jane Hawking bio movie, not Stephen. Bet you didn’t see that coming. And due to that reason, we have a huge lack of science and talk about his work in this movie. They touch on some light basics, but everything feels like it is super dumbed down and only headline creating topics hit. It felt awkward to rush through all of his academic successes and really made me feel like I was missing something.

Also, the one thing that was definitely missing was some sort of timeline to show us when things occurred. I can’t tell if he was able to finish his PhD and have the baby in the two years he was supposed to live or not. Obviously he lasted longer, but when did the milestones occur? They should have really forced the accomplishments on us and let us know how truly wonderful it was.

3 out of 4.
Tags:3 out of 4, Biography, Charlie Cox, David Thewlis, Drama, Eddie Redmayne, Emily Watson, Felicity Jones, The Theory Of Everything