The Rocker is definitely a movie I heard about when it was coming out, and then practically never again. Honestly. The only reason I really can remember this movie at all is because a song from it is a free download on Rock Band. Gotta love that advertising. It is just one of those that once you see the cover or something you go, “Oh. Oh yeah. Okay. I think I recollect that title at one point.” Just no one really saw it.

But now that I have, I can tell you I will make zero geology puns. Not actually about geology, but about music. Whoops. 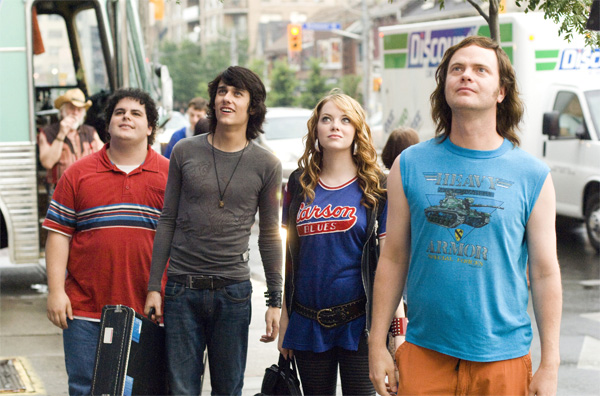 And the band brings a new face to a short attent – Hey look Emma Stone!

BACK IN THE 1980S, a little band called Vesuvius was getting pretty popular with a song. Although just the drummer, Fish (Rainn Wilson) Was the heart and soul of the band. Even came up with the name, brought the energy. The other members had rock names too, like Trash (Bradley Cooper), Kerr (Fred Armisen), and front man Lex (Will Arnett). They are your typical glam rock band of the 80s, and when they get word that they can sign a deal and tour with Whitesnake they go ballistic. Just have to drop Fish and bring in a new drummer, son of a record exec.

Well the money is right.

20-30 years later, Fish is at a dead job and has no worries. Except for all the rage. Vesuvius is STILL a big deal, new albums, everyone loves them. Fuck.

He ends up leaving his wife, and losing his house, so he goes to move in with his sister (Jane Lynch) and her family, including his nephew Matt (Josh Gad). I know, a non rocker name. Lame. But turns out he is in a band too, called A.D.D. and they just lost their drummer, and a school dance concert is coming up. Too bad Fish is their only chance, which he begrudgingly accepts. Singer/guitarist is Curtis (Teddy Geiger) and bassist Amelia (Emma Stone).

Needless to say, some shit happens. Eventually they get famous from a youtube video where Fish is practicing naked, and even get signed (by Jason Sudeikis) and go on a tour! I’m sure Vesuvius wont pop up and ruin anything. Or like, Curtis’ mom (Christina Applegate). 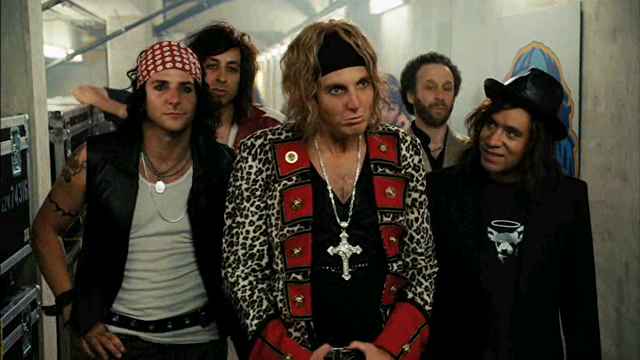 As a geology/history major in college, the band Vesuvius really does mean a lot to me.

Straight talk time. I thought this movie had a pretty good beginning but got a bit boring as the story went on. It happens all the time, and I just felt this was another example of it. Once I pretty much figured out where all the storylines would go, just didn’t care. Dicks are dicks, good guys are good, etc.

To be fair to Rainn Wilson, he was on as that character the whole movie and it seemed like he put work into the persona. It was if Dwight was a little less full of himself, and merged with Jack Black. Kind of.

Everything else? Well, ehh, most people could have probably pulled it off. So I mean, the movie isn’t necessarily horrible, but easily a one and done affair.