I think the only thing I heard about The Raid: Redemption was to watch it. Maybe it was “watch the fuck out of it”. And I might have heard that from multiple sources before I was able to see that. Pretty strong of a recommendation for some Indonesian film (my first on the site, woo?) that I have never heard of.

Hopefully it is nothing like Tactical Force. I want my SWAT teams to actually be effective, and not you know, shitty. Fighting skills plus guns seems like a violent bonus. 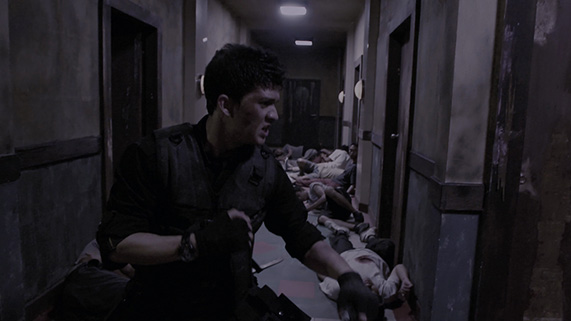 The bodies? They kind of hit the floor in this movie.

In the heart of (Big City Indonesia) is an apartment complex, that is no where near normal. It is home to a lot of drug lords, criminals, murderers, people good at fighting, and the most corrupt thing ever. No one could take it down. Not until today. A SWAT team of 20 some men is sent in to stealthily take the apartment, floor by floor, hopefully with no murders. Just you know, arrests. Big ballsy idea, but one that might work.

Lead by Team Leader Jaka (Joe Taslim), the raid initially goes off without a hitch until they reach the sixth floor. During the mission, a young lookout spots them causing a tense momenet. He is able to escape and tell the next lookout before he is killed, alerting the head boss on the top floor, Tama Riyadi (Ray Sahetapy) of their arrival.

Our actual hero is young Rama (Iko Uwais), a soon to be father, who really really just wont die. Needless to say, shit hits the fan soon after. Snipers take out the ground floor crew, and some of the team members. The power is shut off, and free rent promised to any individual who takes out a SWAT team member. Jaka soon finds out that the raid is not officially sanctioned by the department, just Lieutenant Wahyu (Pierre Gruno), meaning the last five swat members (who are split up) are now on their own and must survive the onslaught.

They also have to worry about Tama’s right hand man, Andi (Donny Alamsyah) who is the head of the logistics and narcotics, and Mad Dog (Yayan Ruhian), an incredibly incredibly great fighter, who can pretty much fuck all the people up. 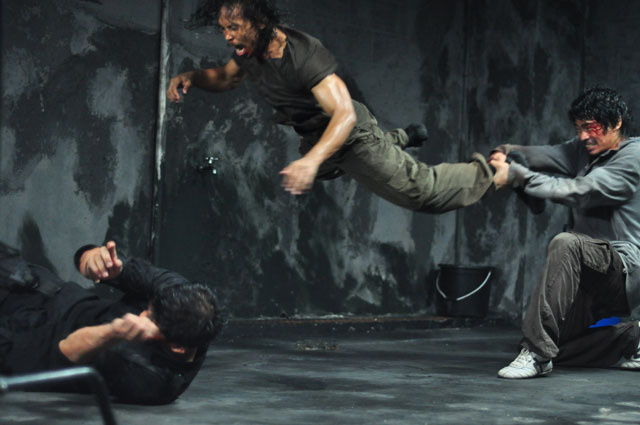 Whoa whoa whoa, wait a minute. WHOA. What is this!? Just wow.

Well first off, if you are like Hank Hill, and hate foreign movies (because if they are good they will get remade here anyways), then no worries, because that is totally what is happening. Similarly, a sequel and maybe third are already planned, with the rights bought my Sony. So if you like this movie, there is that to look forward to as well. I believe the same fight choreographers are involved for the US remake, but really, we will see what happens.

Despite my best attempts, the plot was actually pretty weak in this movie, and hard to grasp. Lots of betrayal. Lots of death.

BUT LOTS OF KICK ASS FIGHT SCENES. Holy crap! What all action movies try to do, basically, is have enough cool stuff happen that the plot doesn’t matter. And generally most of the time I find myself bored with them, and start analyzing the plot, and picking it apart. Really didn’t have that luxury with this movie. Was bad ass pretty much start to finish, and some of the sickest fight scenes I’ve ever seen. And lots of crazy death.

What a horrible way to recommend it I feel, but fuck the rest, just pay attention to the action.