I’ve been averaging about two movies a day the last few weeks. Usually I do a movie from the last five years, to review, and then one from 2006 and earlier, so I can watch more and more that I haven’t seen before. And you know, if they are old, I usually won’t review it. So win for me.

And then sometimes I could have sworn that a movie came out in the early 2000s, just to find out that I am wrong. So hey look, The Nanny Diaries. 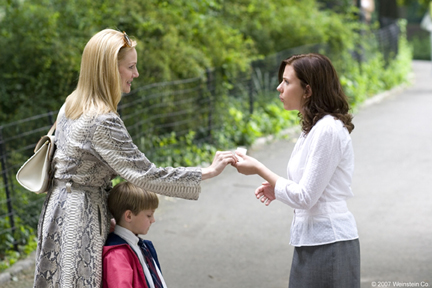 I just met you, and you seem crazy. No I won’t go and watch your baby.

Annie (Scarlett Johansson) is a college graduate and ready to get her big city job and be awesome! But of course, that won’t happen. While dicking around in the park, she pushes a kid out of the way of a biker and saves him from some minor damage and lots of crying. The mom of the kid, Mrs. X (Laura Linney) (To protect the innocent) is stoked, because she is a bad mother and lost her son. And her last nanny quit. Well, her name is Annie and she graduated college, she must be qualified to look after a kid for her.

Turns out single white females with degrees are popular in the nanny community, for whatever reason. So she gets lots of offers, and takes Mrs. X, because it comes with a fancy meal, and she was first. She just keeps it secret from her mom, as she has found a “temporary summer job” instead of a real corporate job. Even though her best friend Lynette (Alicia Keys) thinks it is a bad idea (and will get mad if all she talks about is Nannying).

She gets the job, blah blah, it is hard as crap. Kid doesn’t like her at first. Mom is a bitch who won’t learn her name. Dad (Paul Giamatti) is away on business a lot and for sure cheating all up over the place. She also meets ‘Harvard Hottie’ (Chris Evans) who grew up like the kid she is a Nanny for, and I guess shows that they can grow up to be decent people. With the right help.

Well shit. She wants to leave the job. But then the kid will grow up all sorts of fucked and rotten. What can she do!? 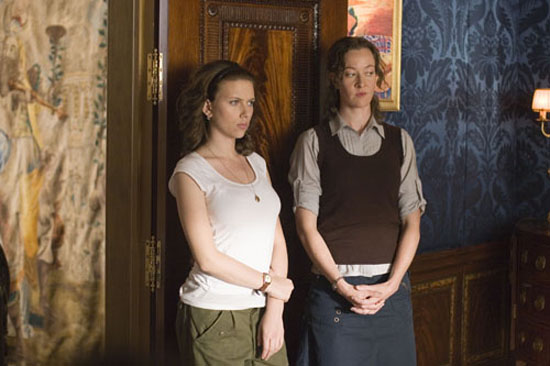 Ah yes. Glare awkwardly at the side of the room with another nanny. Brilliant!

Good news, this movie doesn’t turn into “And then she lived happily ever after as a nanny for the rest of her life” or a “And then she found true love and never had to nanny again for the rest of her life” story. Hooray! Romance is there, but not central and not dramatic, just mainly to show the foil as I mentioned above. Similarly, she only does nanny for a short time, and discovers what she wants to do with her life.

This movie, based on a book, honestly didn’t surprise me too much. Mrs. X was a horrifying bitch, unbelievable attitude that I could not understand. Just made me mad the whole film, which I guess is the point. I did like the overall story though, surprisingly enough, yet not entirely sure if its just because I like Scarlett Johansson.