The Meyerowitz Stories (New And Selected) is not a movie I was jumping in my car to see. I mean, just look at the title. You don’t have to know anything about it to realize how much of an indie movie it must be, and how many hipsters must have died to make the production.

But it is a new one coming to Netflix, so those are usually surprising to me in quality. I have seen a lot of stuff on there that I have hated and quickly loved while watching.

The other factor is the director, Noah Baumbach, king of the Hipsters himself. He has about a 50% success rate from my point of view, so I was ready to be wow’d or annoyed. 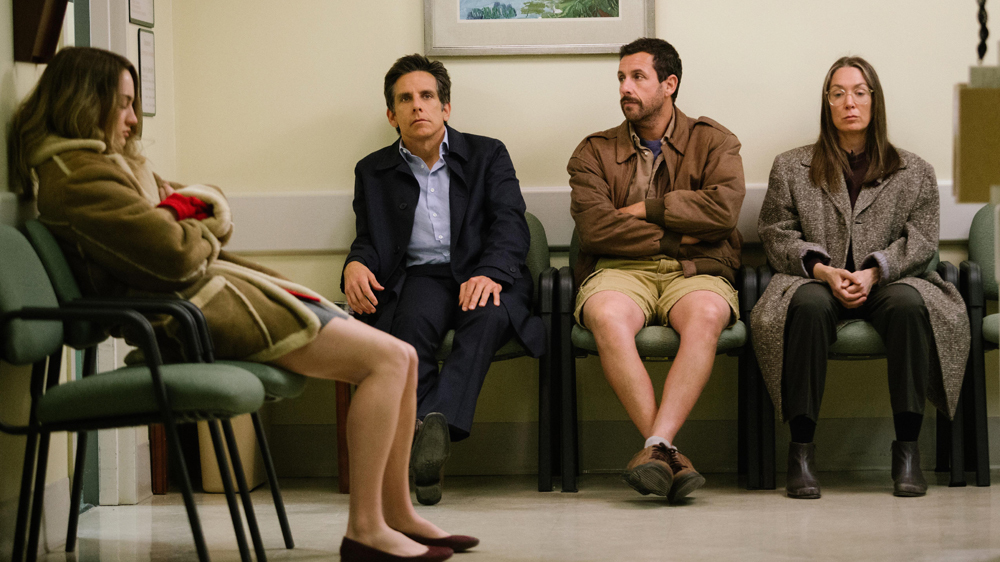 The way they sit reminds me of an Olympic medal podium.

Harold Meyerowitz (Dustin Hoffman) is a slightly eccentric retired sculptor. He never really got famous from his work, but he feels famous in his heart. He worked as a professor at a college in NYC to pay the bills and get a decent living that way. He has had several wives and spawned three kids, but he does not love them equally, especially due to the fact that they never really seemed to inherit his artistic talent.

Or at least that is what Danny (Adam Sandler) thinks, his eldest. He has a daughter of his own (Grace Van Patten), about to go to college, and he is recently divorced and about to be homeless. He was a stay at home dad, he played the piano, but he again was never really famous. There is a sister too, Jean (Elizabeth Marvel) who is sarcastic and tries to not hang out with her parents too much.

And their youngest brother is Matthew (Ben Stiller), born of a different mother, and clearly the favorite kid. He was encouraged the most and constantly looked after unlike his older siblings, but he still didn’t become an artist. He went and got a real job, making real money, but a job that doesn’t really have much a soul behind it. He also moved far away to California.

Basically, this film is about the children dealing with their lives from their emotionally abusive father, always feeling like let downs in their eye, as he himself is getting older and thus about to leave this world. 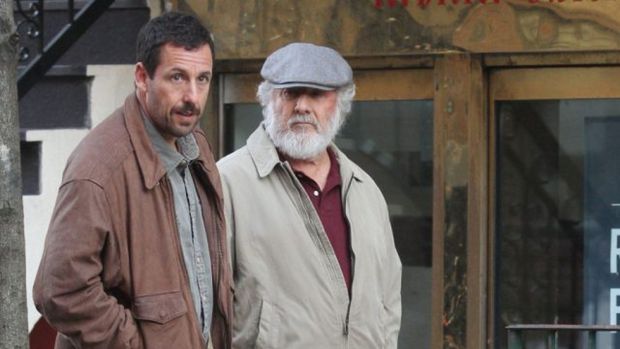 The movie increases the facial hair game of several of the actors.

Like a lot of Baumbach films, the acting is definitely top notch. I have rarely seen Sandler better. Marvel carried her own wait with a very unlikely character for her, and Hoffman is kicking a lot of ass in his old age. Stiller is one of the few roles that doesn’t feel like a lot of acting, and mostly just Stiller feeling like Stiller. If anything, this film is worth the watch for the acting.

The plot isn’t as good as the characters in the story. We have some nice dialogue, and a lot of backstory, but we don’t get to see a whole lot happen on the screen.

But really the reason it is just left in okayland is due to the ending. It just began to drag, going further and further into the aftermath portions of the film and it took awhile to just stop. That is how I will describe the end. It just stopped. It was not worth the wait of what felt like multiple good stopping points to get to the actual ending.

The Meyerowitz Stories (New and Selected) has an elitist title about a few people who most would consider to be in the elite class. It just fails to live up to the characters it created.