The Great Buck Howard is definitely one of the movies I bought just because of the cast list on the front, and not really knowing anything about it.

I can definitely say I have heard zero things about this movie ahead of time, which means I can ruin that moment for you if you watch it with this review. Hooray! 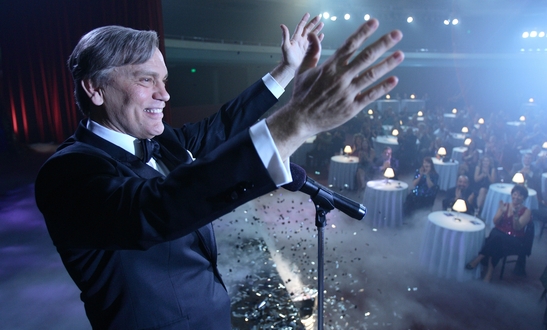 Kind of like ruining a mentalists act. The claps will fade :(.

Turns out, this movie is actually about Troy Gable (Colin Hanks). He doesn’t like his place in life. Law School just is not fun. It sucks. His dad (Tom Hanks, yep) forced him to pick this path though. So he says enough is enough, walks out of law school, and time to find his calling.

Maybe a writer? Sure, but it doesn’t pay. So he needs a job for bills while he thinks about writing. Why not the stage manager of the Great Buck Howard (John Malkovich), a mentalist who he has never heard of. Sure, he has apparently been on Johnny Carson 61 times, but that is old.

Now he just travels from small town to small town, with a loyal fan base who love his acts and cheesiness. Troy quickly learns what to do from Alan (Adam Scott), the soon to be former tour manager, who eventually quits and leaves in a rage. Okay, so apparently Buck is not really so great, but more of a dick. But its a job, and why not stick around?

Well, he gets to see a struggling mentalist make it through life, without missing a beat. Just takes it all out on Troy. He even has an amazing act, where he has audience members hide his “fee” for the night, while he and his staff is away, and without fail he can find it every time. If he cant, it gets donated back to the town.

Even the build up of his new trick, putting a record number of people to sleep at a time. The problem is, shit keeps going wrong. His press person is out of town, so he is stuck with a rookie girl (Emily Blunt), has crazy drivers (Steve Zahn), and a generally apathetic manager (Ricky Jay).

Here is a look as shit hits the fan. Pretty hard.

I was worried about this film, just because it was John Malkovich in a PG setting. But what the fuck was I thinking? This is John Malkovich! He does things awesomely, and you can’t help but watch.

His character of Buck Howard was definitely an interesting one to watch, and clearly the most important part of the movie, despite it being a journey of discovery for Colin Hanks’ character. He is based on the The Amazing Kreskin , who was known for finding his fee pretty much every time (but nine, oddly enough).

Did I mention Malkovich kicked ass as this character? The rest of the cast was pretty decent as well. Especially the outrageous locals at some of the shows. It is hard to describe why this film is so great, but the only word I can think of is charming, I guess. The cast works well together, and it is strangely interesting despite the subject matter. Give it a chance, and maybe you will love it.