Or it could be thanks to a truly absurd and original idea that just blows your mind as a viewer. Something that has never been discussed like it was in a movie before, something that will leave you as a changed movie goer by opening your mind just a tad bit.

I am about to fully review Swiss Army Man. But as a suggestion, if you know nothing about the film and want a crazy experience? I suggest you go and watch it without checking out the trailer, without my small plot synopsis, completely blind and just let the movie happen on you. 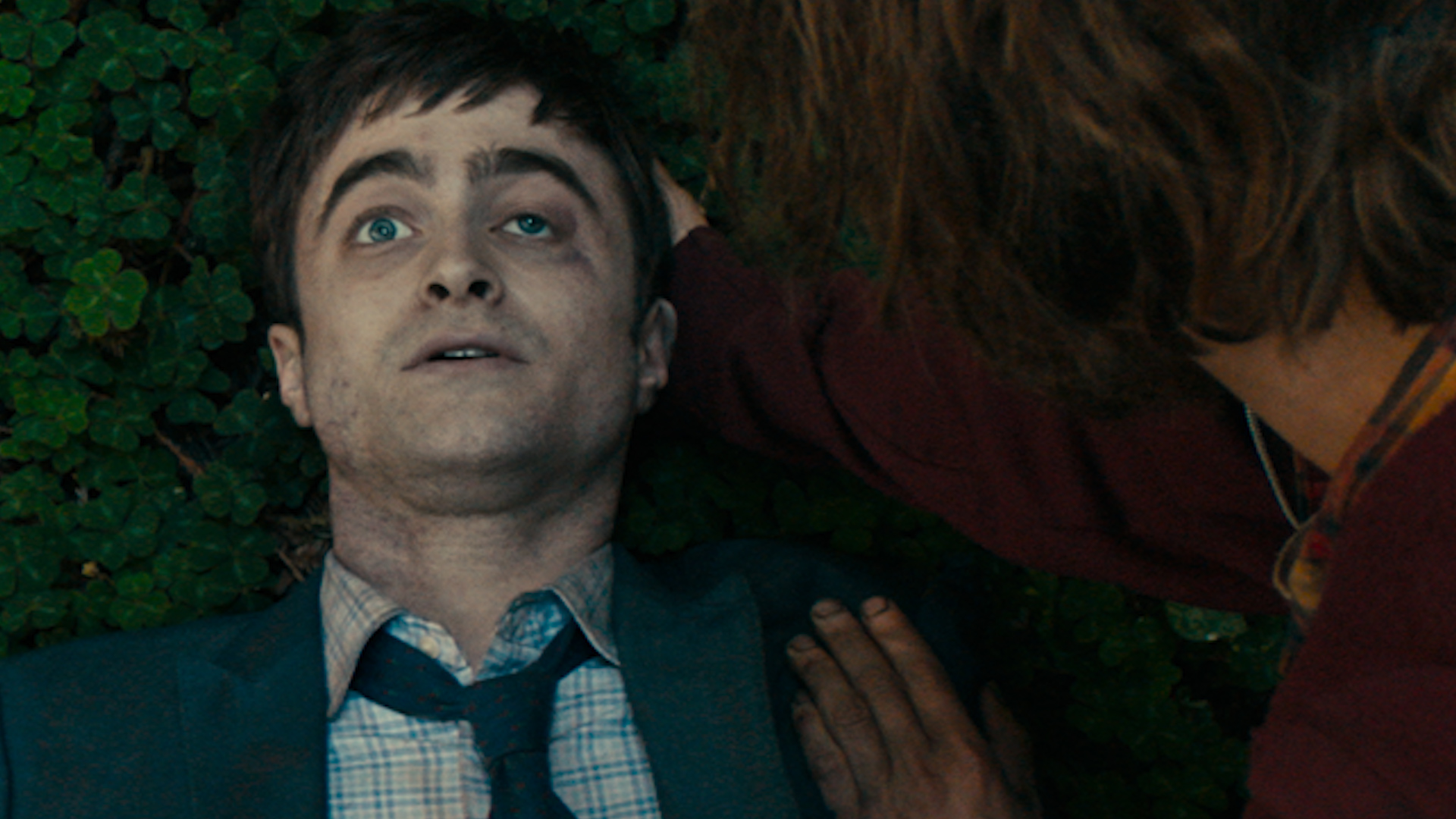 Uh oh, dead Harry Potter, that means this is your last chance.

Hank (Paul Dano) is on a tiny deserted island, like, really small, with only some rocks in a big mound. He has been there for some time and he is ready to kill himself. But then, a body washes on the shore.

Hank hopes it is a live person so he can have company, but nope, it is just another dead body. This dead body (Daniel Radcliffe) gave him one small glimpse of hope before smashing it all away. And this body keeps farting, almost constantly, making it even more bizarre. But then Hank sees the body floating on the water, almost propelled by these same farts. Since Hank has nothing else to live for, he hops on that body and rides it like Jetski to freedom.

Well, at least to somewhere else. He finds himself on a much bigger beach, with a forest and trash. He is now SOMEWHERE in the world and damn it, that body helped him. Maybe that body can help him some more too, or at least, he feels like he has to bring him to civilization to get the proper burial he deserves. So he brings him with it.

Are you still with me? Even though you found out the movie is about a farting corpse and a guy trying to make it back to civilization? I bet the Jetski gif made you stay. You’re welcome for that, and that happens in the first 10 minutes.

Speaking of time, Swiss Army Man is only around an hour and a half long and it ends up being the perfect time for a movie this long. We don’t get overlong sequences of them trying to survive and the ending goes at a good pace. We are given several different montages of the Radcliffe / the “Multi Purpose Tool Guy” being used in unique ways to help Hank survive and they are done in a strange way to really add to the magic of the whole movie.

Keeping with the slightly absurd concept, the music in this film is a phenomenal fit. The movie music is basically made entirely by Radcliffe and Dano. Okay, I know in reality, the music is done by some performers, somewhere else, with extra instruments and all. But as it is put into the film, it is mimicked after their own dialogue and noises and flows wonderfully. The music itself is an experience. It feels airy, full of adventure, and downright inspiring.

The reason this movie works so well is that Dano and Radcliffe fully commit themselves to their roles. There are no sly winks to the camera or hidden smiles. They are two people in this serious situation and despite how crazy it all feels, they work together to make it work. It takes some high level chemistry to pull it off. Both Dano and Radcliffe pull off extraordinary performances. Definitely Radcliffe’s best performance ever. And it is a top one for Dano, but for Dano, almost everything is top level.

Swiss Army Man is bound to be one of the most unique experiences in cinema over the last decade. It is a magical film with enough ambiguity to make the viewer think and draw their own conclusions. The ending gets a bit weird, but to me it really just shows that anything is possible. Just don’t give up and the weird can become reality.