I claim to be pretty nerdy on this site, yet almost every time it seems something nerdy comes up, I claim to not be that type of nerd.

This is another example of one of those times. Star Trek? Never really watched any of it. The amount I know about it is the amount I am supposed to know as a pop culture fanatic. I know some of the quoted famous lines, who a couple captains were played by, and that is about it. So hey, this film just has to appeal to those characteristics and be entertaining to watch for me to enjoy it. 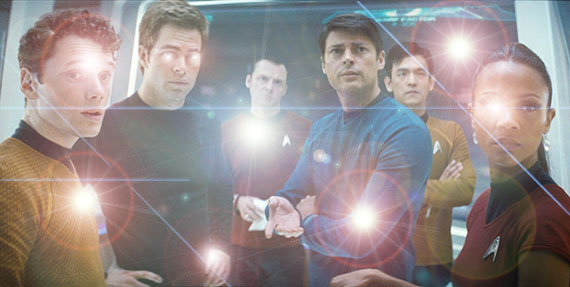 Movie begins not with the crew we love. Its other people. Who totally get attacked my Romulans, when they thought it was just a lightning storm. Turns out they are from the future, and want to kill some Spock dude. Whoops. Too early in time. Nero (Eric Bana), their leader doesn’t care. They continue to attack, killing the captain, leaving George Kirk (Chris Hemsworth) in charge, who orders the fleet to evacuate while he steers the ship on his own into the Romulans. His pregnant wife, Winona (Jennifer Morrison) gives birth to her son in the escape pod, James Tiberius Kirk (Chris Pine), while her husband, you know dies. Totally was a captain for a whole 10 minutes, but at least he saved lives.

Many years later, Kirk is a troublesome son. Smart, but doesn’t make something of his life. He could easily join the starfleet, be an officer in four years, and Captain a ship in eight. But he is lazy. Pike (Bruce Greenwood), a captain convinces him to try otherwise, and he enters star fleet. Definitely not just for a girl, Uhura (Zoe Saldana), an alien language expert.

Three years later, he is doing the Officer test. So soon! He ends up “cheating” some how to pass the test, which is supposed to be unwinnable, made by Spock (Zachary Quinto) himself. Half Vulcan, half Human, who joined Star Fleet instead of a science academy because he didn’t like the discrimination and perceived weaknesses. Eventually a distress signal is found near Vulcan, sending the academy into a panic and sending their entire fleet. Kirk is able to sneak aboard the Enterprise, thanks to the help of his doctor friend Bones (Karl Urban).

Hey look, a lot of other famous characters I have heard referenced before. Like Chekov (Anton Yelchin), a navigator and weird guy, and Sulu (John Cho), playing as George Takei. Scotty (Simon Pegg) gets there eventually.

So yeah, Romulans. They are mad. They set up a trap for the whole fleet! Can the Enterprise survive the attack, save the Vulcans, figure out what time travel shenanigans are going on, and save the day? Sure. But also, Leonard Nimoy. 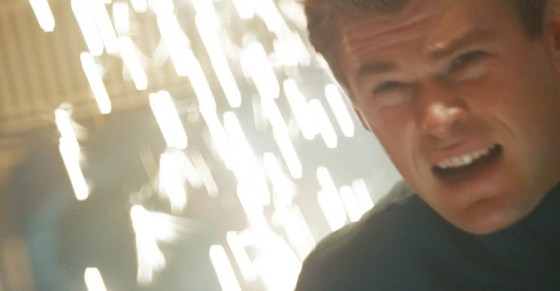 In Star Trek for 5 minutes. Lands Thor part because of it.

Hey look, this film gave me pretty much everything I wanted in a Star Trek movie, as a non Trekkie, that’s great! My biggest complaint would just be weird technical aspects that tended to take me out of the setting.

Yes, lens flare indeed was an excessive problem. But then just little things that bugged me. Like little Kirk, driving the car and running away from the cops. He turns on the radio, and Sabotage from Beastie Boys comes on. So okay, car is playing music. I’m fine with that. But then car goes over cliff, he jumps out, car super far away, music still loud as ever, now it is just background music? Can’t do that shit to me. That bugs the crap out of me.

I think they did do a pretty good job dealing with a time traveling/parallel universe time line, and used it as a good way to explain why this is different than the TV show.