Oh, it must be summer now. That is the only way to explain that my local theaters are finally getting some limited release films over the last few months. All the college students have gone home, so they have to cater to old people now. Which is why I got to see Stand Up Guys, a few weeks before its DVD release, a few months after it came out. Heck, I get to see Mud for next week too. Color me ecstatic. (But where are you Stoker?!). 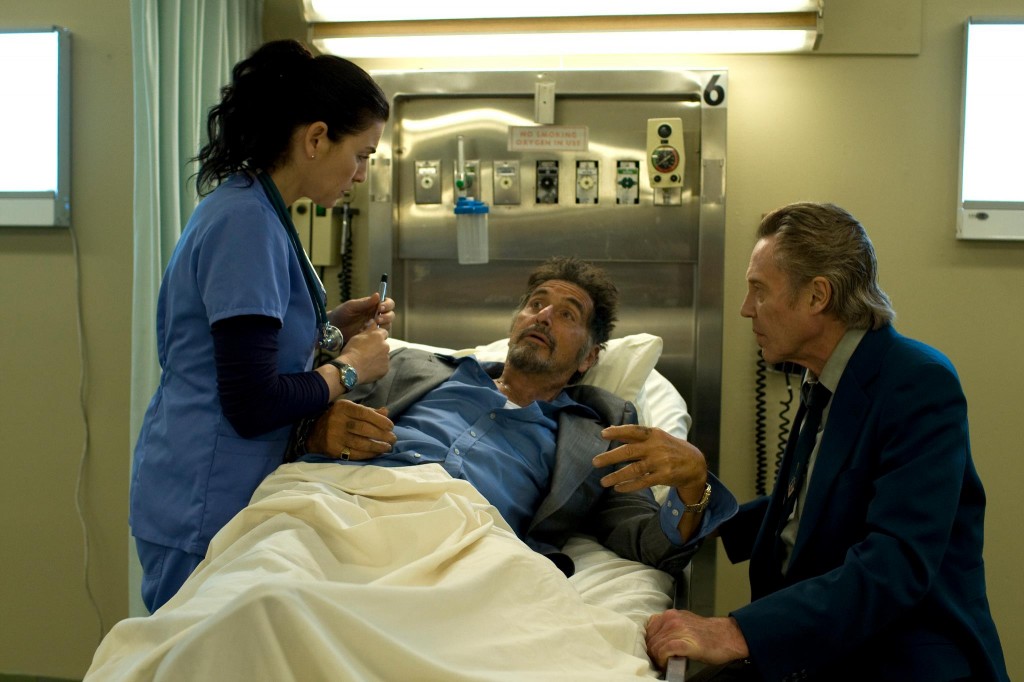 Speaking of “Stoking,” this image has been edited from the movie version. Want to guess where?

Life sucks for retired gangsters. After all, it is hard to retire as one. You have to first not die. You also have to be released out of your gang. Even when you are, you might be later charged for crimes if you slip up, and people still might want you dead. Jeez. No on thinks of the consequences!

For Val (Al Pacino), he just spent 27 or so years in Jail, taking the blame for a crime that went bad, keeping his accomplishes secret. Yeah, what a stand up guy. Unfortunately, in that accident, he accidentally shot and killed the only son of their boss, Claphands (Mark Margolis). So Claphands is mad, but he is a vengeful fucker. He has made Val serve his entire sentence looking over his back, with plans to have him assassinated within a day of him getting back.

Claphands is so vengeful, he is making his best friend, Doc (Christopher Walken) take him out. The only assignment over the last 30 years, to kill his friend within his first release. Sucks. But Doc is going to make sure his last night with Val is a special one before he commits the deed. You know, or else they will go after his other loved ones! 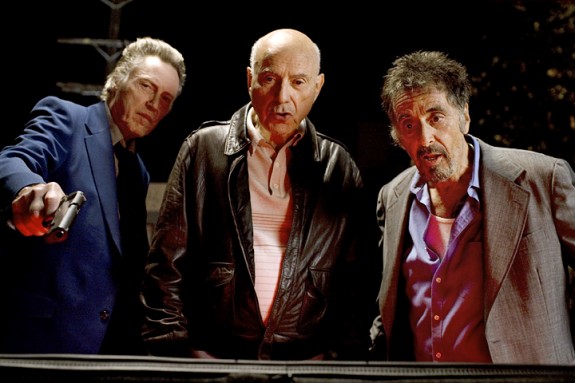 Now guess which of those woman was found in the trunk!

Meh. The first 20 minutes of the film, I was feeling pretty dead inside. It was moving slow, and it looked like it was going no where. Neither Al nor Christopher seemed to really be in to it. I mean, they are old, and they have played gangster before, so they should be old hats at this. But neither felt comfortable, and that felt true the whole movie.

It did get a bit better, there were some fun moments, but it is surprising how much of the movie ended up just being dick jokes. A lot of the gags / adventures for them felt a bit forced too. They threw away any sort of realism for a couple quick jokes or moments that weren’t really funny. Not to mention the end is a total cop out, and kind of bullshit.

I will tell you, what got me the most was the lack of respect for continuity in a movie, or at least no sense of time management. They eat at the same restaurant in a span of six hours three times. Each time with full meals for Al Pacino! They find a nice car a block away from the restaurant. Later, at the same restaurant, they have to go back to where they found the car, and talk about street names and then have a long drive over to it. Come on, don’t lie to me like that movie makers.

But one scene made me tear up. I am such a softie.