Dashing through the snow, had a very shiny nose, don’t you tell a single soul what I’m going to say. That might be a Christmas song, I don’t know.

Who says I don’t know the true meaning of Christmas? Well, Kirk Cameron says so. This movie came out during the holidays in 2014, and it took until November 2015 for it to be available on DVD and VOD. A whole year! Because Saving Christmas ended up with a lot of backlash and hate. Cameron gets a lot of grief for being super religious, and not all of it is warranted. It doesn’t deserve its low IMDB/RT rating, because over 90% of the voters have probably not even seen the movie. I hate it when people go on campaigns like that. So I also hated it when Cameron made a Facebook post asking for his followers to rate it high just back.

And then the internet responded again, even more angrily, which is why it is rated so lowly everywhere. Silly Cameron, you sank to the internet’s level. No wonder it tried to destroy you. 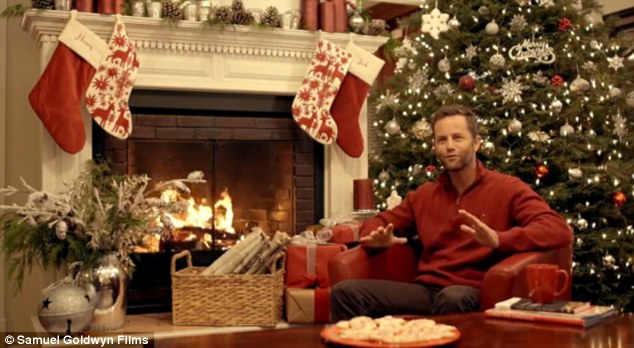 “Sit down and shut the fuck up, it is Jesus time!” – Kirk Cameron’s opening monologue.

First of all, I though this was supposed to be a documentary. But it is not, it is a fictional movie…slash kind of hybrid. Like Kirk Cameron. He is playing himself, Kirk Cameron. He also has a sister in the movie, Bridgette Cameron, who is also playing herself. Also, the movie opens with Kirk in a fireplace Christmas setting, talking about the joys and wonders of the Holidays and warns us that there are people who don’t like it as much. Yes, this is exactly what the first picture is showing.

So it is kind of a documentary too. A fictional documentary. Let’s go with that.

Either way, after that introduction, we get to go to his sister’s holiday party, where there are lots of friends and their families all enjoying things like hot chocolate, presents, music, and Santa. Santa, who of course is the Uncle (Ben Kientz) dressed up because he has no job and is getting paid. Woo.

But someone isn’t enjoying the party. Kirk’s brother in law, Christian White (Darren Doane), not actually his Brother-In-Law, but the director of this movie nonetheless. He is a party pooper. Why? Does he hate that there is a War on Christmas and he is forced to say Happy Holidays? Nope! The opposite. He hates what Christmas has become. Christian is actually super Christian, and he wants Christmas to be about one thing and one thing only. Celebrating the birth of Jesus and worshiping and hallelujah. So he is being a little bitch, and goes out to his car to have a chill pill. Kirk joins him, because he cares about his family and they talk.

Namely three things, after Christian bitches about all the excessive stuff. They talk about Jesus’ birth/the nativity, the pagan Christmas Tree, and Santa aka Jesus’ Replacement (or Satan?!). And you know what Kirk tells him? He tells him he is wrong about everything he is complaining about, and uses the Bible to explain some shit. This makes Christian very excited to be a hero, and he goes back and the party is happy again. Yay end of movie. 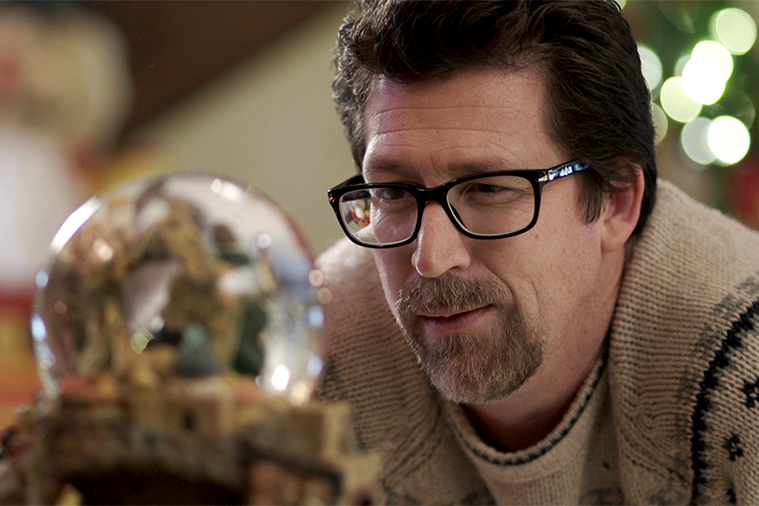 How small? Their roles could fit in that snowglobe.

What in the fuck is this mess of a movie? First of all, the run time is listed at 80 minutes, with the last 10 minutes being credits and bad outtakes. The final 10-15 minutes before the credits is 90% just party montages with Cameron occasionally talking over it and some dance party stuff. And the rest of the 50-60 minutes has about 20 minutes of maybe plot. This movie is mostly filler and has very little going on. The only thing that happened in the movie that I didn’t mention was the other two tagged actors having a conversation about Christmas and conspiracies that was never resolved and went nowhere.

And of the plot? About 5 minute devoted to talking between the three characters. Establishing he is upset, long ass talk in the car, and the make-up. The car is the brunt of the movie, and thankfully it isn’t just them talking in the car. When Cameron talks after the rants from White, he becomes voice over mode so they can have scenes showcasing what he is talking about from the bible. Everything about this movie could have been done in a 30 minute documentary, which we could have then panned on information alone, but instead it is turned into a feature film that is mostly a time sink. Add on bad/barely acting and you get an overall terrible movie, regardless of the message.

As for the message, I can’t even fully describe what Cameron claimed. The first thing he said about the birth of Jesus made no sense at all to me. His defense of the Christmas tree was somewhat reasonable. The only thing he talked about with any remote sense of truth was the actual story of Saint Nicholas and why he was awesome. But the problem with his answers to the complaints were that he basically ignored the actual complaints. A lot of it boiled down to comparing most of the festivities to pagan traditions that existed long before Christianity, which everyone can agree is true. He basically responds, “Nuh uh! You just read that on the internet, here is why they are all super Christian and good.” So his responses ignored the issues and were made up. Jesus Christ, what a waste of time.

If he at least made a documentary about there being a non-fictional War on Christmas at least some of the points he brought up could be valid. Instead he took real complaints, and said ignore them. Just be happy and do Christmas, because Jesus. End film. Fuck you.