Is this the real life? Or is this just fantasy?

That is the question that you have to wonder sometimes with Documentaries. One of the reasons why I distrust them. How much was naturally caught on camera and how much was set up? I have a hard time believing that Bully was actual bullying, for that reason.

Paper Heart intends to be a bit gray, though.

We are told that this documentary is an idea made by Charlene Yi, who claims that she has never been in love and doubt she ever will be. So she wants to go around, asking people their opinion on love, from her friends (Seth Rogen, Demetri Martin, Martin Starr, and more) to people who have good stories around America. She also goes and talks to the quick wedding people in Las Vegas, tries on a Bridal gown, and more!

Oh, and she also falls in love during this documentary. 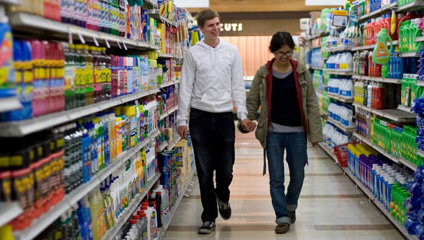 Good timing huh? She meets Michael Cera, yes, that Michael Cera. He is awkward, but he likes her and tries to get her to go out on a date and eventually succeeds. Jake Johnson, who goes by Nick in this documentary helps out of course because Cera is his bud. Once their relationship starts to progress, Nick decides it needs to be a part of the documentary too, because it fits the theme.

But is this a real romance, or is this whole thing just a super awkward and realistic mockumentary?

I would say while watching it, it is pretty hard to say. I of course looked it up afterward to figure out if it was all true, all fake, or somewhere in between. I won’t tell you what, because you can look it up yourself yo.

What I can say is that everything about this at least felt real. The stories that couples told about their love were very cute, despite the awkward puppet show during them. Everything felt genuine, and it made me feel kind of sappy.

When I bought this movie, I didn’t even know it was a documentary until I saw a trailer for like, a year later. But I like what I saw in this film, even if I have a hard time explaining just what it is.