Hey, everyone love’s cats. Just go onto the internet. But the love for cats comes from being cute, or seeing them do derpy things. They don’t love all cats.

Which is why the concept for Nine Lives is so bizarre. The plot comes straight out of a film from the 1990’s (Or a Rob Schneider film from any decade). Guy goes into a cat. The only way it could be really worse is if the cat itself could talk in English and spoke to the cast, but alas, it just has to meow at them.

People don’t like those sorts of films anymore. Those are the films that get mocked and burned at a stake. And here it is, 2016, with Nine Lives coming out. Sure, yeah, I did think Keanu would be a movie about a talking cat, but ended up just being a regular cat and pretty decent.

I don’t think the same sort of change can occur here while watching. 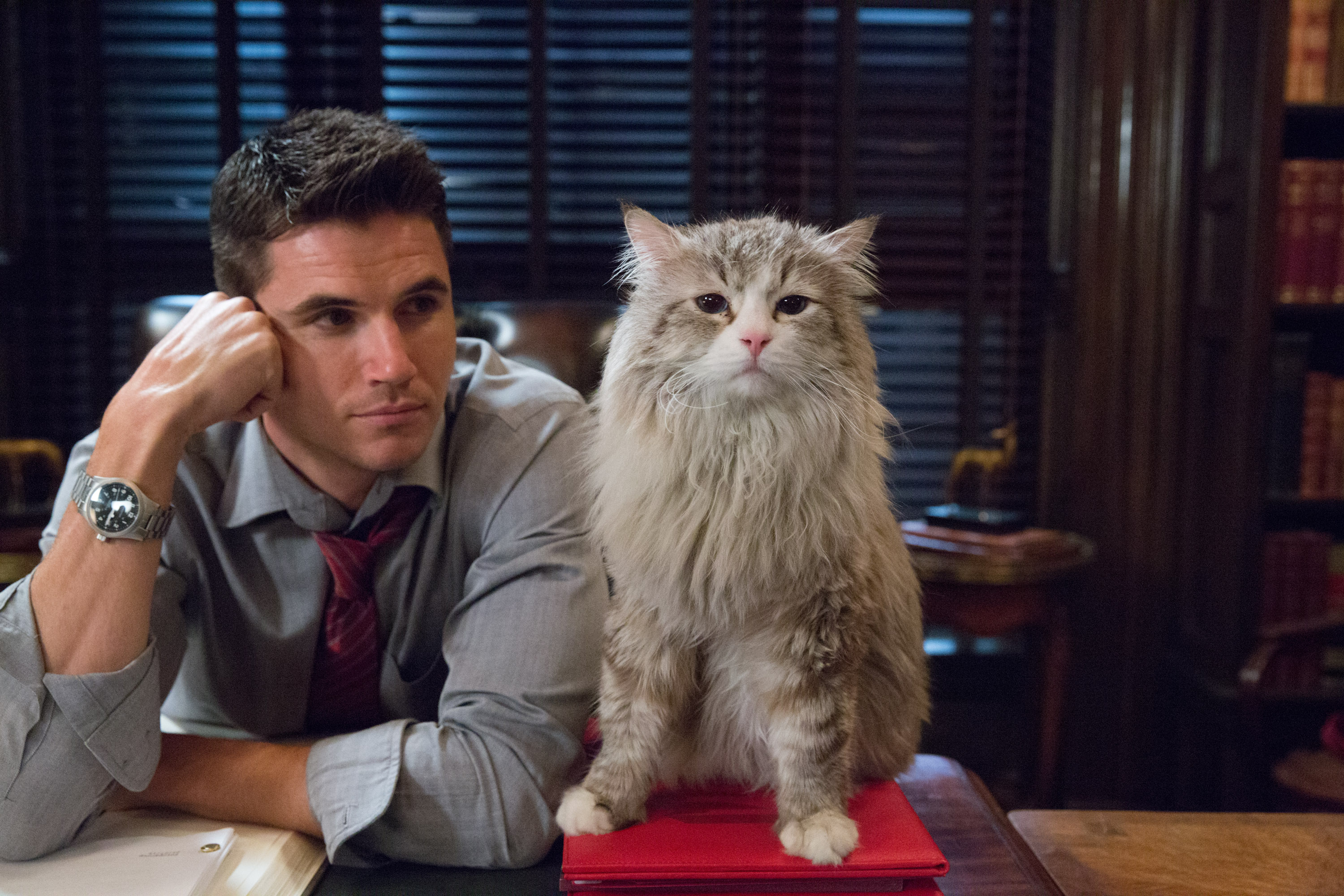 He is going to stare a whole through that cats head.

Tom Brand (Kevin Spacey) is what his name suggests, a walking brand. He is all about his image and his companies success. As CEO, he wants to do fascinating things and leave a permanent mark on society. And he decided that permanent mark would be the tallest building in America. Now that it is almost completed, it turns out another building in Chicago being built will easily beat theirs in height, ruining his dreams.

One of his workers, Ian Cox (Mark Consuelos) was supposed to know about this sort of thing, but he didn’t care. He wanted to take over the company and sell it for money.

All of Brand’s success means his family had to suffer a little. His new wife (Jennifer Garner) and daughter (Malina Weissman) don’t see him a lot and he forgets things, like birthdays. And his daughter wants a cat, but he doesn’t want a cat in his house. But eventually he just gets the cat.

Buys it from a weird guy (Christopher Walken), and sure enough, an accident happens putting Cox in a coma and his spirit or mind or whatever in the cats body. Knowing that the last thing he did before the accident was to actually get a gift for the daughter was a good thing, they take the cat in while he recovers. This allows Brand to try and bond with the daughter and convince them that he is a man in a cat’s body.

Also starring Robbie Amell as the son who is trying to help Brand’s company while he is in a coma, Cheryl Hines as his ex-wife, and Talitha Bateman as his ex-wife’s new daughter.

Oh ho ho, the human is on all fours. What a role reversal!

Jennifer Garner almost had the worst year ever. She had three movies come out, and I have seen two of them. Nine Lives is beyond terrible and Mother’s Day (which I haven’t seen) was blasted by critics as well. She is down right lucky that Miracles From Heaven ended up being a relatively decent Christian film, and not a standard tacky/corny over the top Christian film. It would have been real close to being just a complete fail of a year.

There isn’t a whole lot to be said about Nine Lives that isn’t already out there on the internet. What the hell was everyone involved thinking?

There are very little surprises in this film. Spacey, Garner, everyone just phones it in. When things start feeling the bleakest, it was because they made the son character a passive, dumbass. He seemingly refused to fight and it didn’t make sense. So why did it happen? Oh, so the son could do a bigger distraction near the end of the film, in order to end on a bigger note. So yeah, temporarily changing how a character works, because the writers don’t know what the hell they are doing to get to the finale they want.

The cat looked terrible when it had to switch to CGI, which was whenever the cat had to do anything special. So a giant chunk of the movie.

Walken was in this movie, and he has been in mostly shit for years.

There is just nothing really positive to note. It has a weak script, weak plot, weak acting, and at under 90 minutes it still feels too long.