Man On A Ledge, a very descriptive title for a mysterious movie. I was confused when I saw the TV spots for this movie at first, the commercials definitely made it look like it was a TV show. But there was no way an entire show can be based on a guy maybe going to jump off of a building.

Unless it was on AMC, but then those 8 episodes would probably be the most amazing episodes of TV of all time.

But nope, it was a movie. But what the heck was it about? Very sketch previews. I did want to see it in theaters, but alas, no friends to go with. I was hoping it would be another movie like Phone Booth (which I love). But it is in fact, way different. 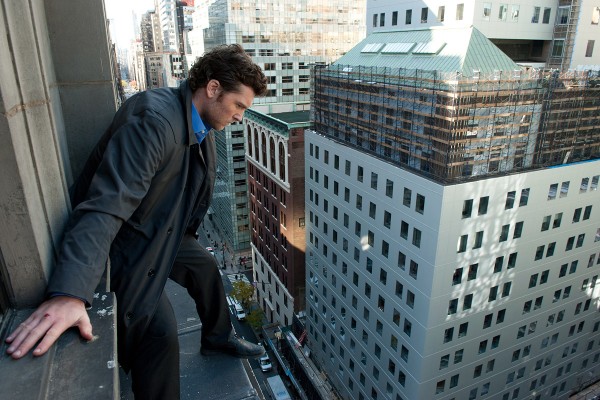 For instance, phone booths are 9 times out of 10 a safer place to be than a ledge.

The only stuff I will say in this will be known from the first thirty minutes. I mean, you have to get some plot as to why he is on the ledge. If not, you wouldn’t read this part at all!

Nick Cassidy (Sam Worthington) used to be a cop, but got sentenced to jail for a felony. At the funeral of his dad, he found an opportunity to escape, and oh boy did he. He claims he was set up, where he allegedly stole very valuable diamonds from a local real estate / diamond guy (Ed Harris). Even his former partner (Anthony Mackie), despite his claim to innocence.

What does he do with his new found freedom? He makes a fake identity, gets a nice room and goes to stand on the ledge in the middle of NYC. Wooo, a jumper!

He refuses to talk to the original hostage negotiator (Edward Burns) but demands instead Lydia Mercer (Elizabeth Banks), someone who ended up getting a cop killed a month earlier, and the current red headed step child of the police department. Maybe he is just stalling though. He is after all talking secretly in a hands free device to his brother (Jamie Bell) and his brother’s girlfriend (Genesis Rodriguez), who are across the street trying to break into a jewelry vault. 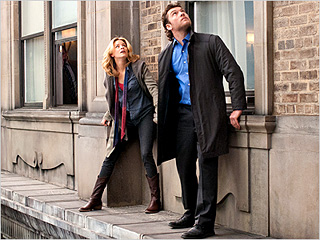 A lot of the film takes place here though.

Thankfully the film had a lot more going on in it than just a diamond heist. And he wasn’t on the ledge the whole time either. Thanks to things like flash backs, the heist itself, cops doing cop work, and leaving the edge within the last 20 minutes, it is more than a one note thing. It is obviously a metaphor and literal title, given he is on a ledge, and just means a man who has no place else he can go. Either prove his innocence (if he isn’t lying) or die trying. Animal in a corner, and other stuff like that.

It had an okay plot, and a decent heist, but was still probably a bit too long. A few of the potential “oh man, action!” parts are just him acting like he will jump, when we all know it won’t ever happen. Not that early, at least.