Yeah. We got a movie called Humans Versus Zombies.

Yeah, it was inspired by the live action game played on college campuses around the (world?) US.

Yeah, it was low budget and went straight to DVD. Well then, shall we?

But they know their audience. Bring on the nerd jokes!

This movie takes place, surprisingly, around a nondescript university. Something else nondescript happens in the world, and some homeless people might end up biting some people. But that doesn’t matter. Because it is Humans vs Zombies week at this university.

Cool, they can use nerf guns too! Our movie opens up with some rule disputes, but they are pretty pathetic.

Well, actual zombies start to appear, much to our main characters surprise. Who to we have? Random hot party girl Amanda (Melissa Carnell) who normally wouldn’t hang out with these guys. Virgin nerd who predicted zombies first and plays MMOs Danny (Jonah Priour), and he likes Amanda. Internet gamer girl who has a webcam show about games, causing nerds to send her free shit, Tommi (Dora Madison Burge). A jock-ish guy who actually likes her and her show, James (Jesse Ferraro). Dude who really fucking loves killing zombies and this whole thing, Brad (Chip Joslin). And of course, war vet turned campus security guard who is really good at killing zombies, Frank (Frederic Doss). 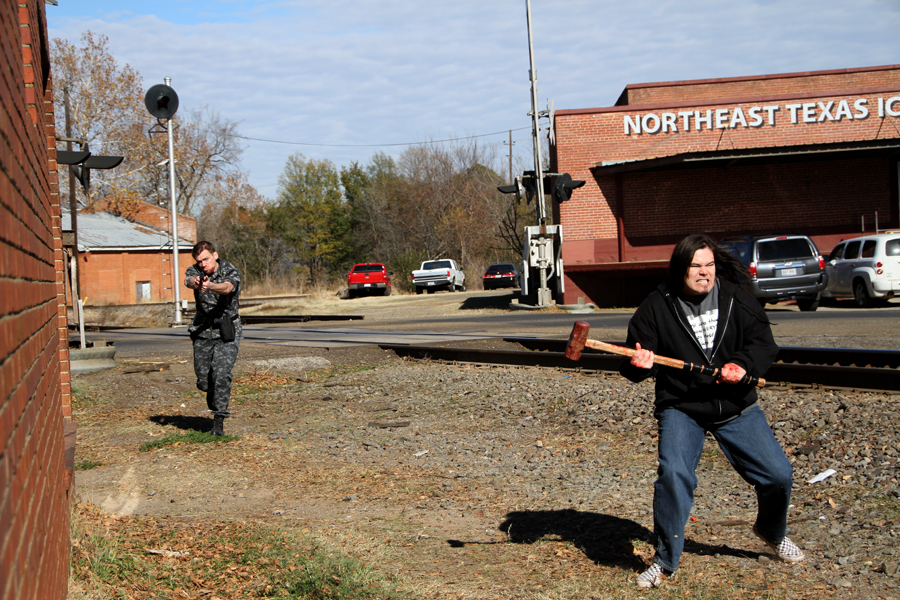 Yeah, fuck you, you just get humans, no zombies.

Ho hum. Well, like most low budget comedies with some horror elements, this one failed to entertain for long. To be fair, it had its moments, namely from the “nerdy virgin” character. One area, near the end, he developed a huge strategy for getting his group out of the hardware store to a more safe location using knowledge he learned from MMORPGs. They had a tank, DPS, healer, range, and wild card. Alright, the Wild Card might be more of a It’s Always Sunny in Philadelphia reference. But still.

But one interesting scene does not fix the bunch. Most of it is so low budget feeling, the zombies are never scary, just ridiculous.

Having the college game component was such a non important addition to the film, this could have been any generic bad zombie movie. It maybe mattered for only five or so minutes, and used it as an easy way to introduce extra characters. That is it.

The ending almost left it open ending, so I also maybe got a laugh of it’s last minute decision to bring closure.