Skip to content
HomeUncategorizedHarry Potter and the Deathly Hallows, Part 2

Harry Potter is Daniel Radcliff, Ron Weasley is Rupert Grint, and Hermoine is Emma Watson. Also, Alan Rickman is Snape, Michael Gambon is Dumbledore, well, not really. He is dead.

Woo! Last movie of the series! That means if you ignore the weird Pottermore thing, Harry Potter is done, out of our existence. Until 12-15 years from now when they reboot the series again for a new generation.

This movie takes off where Part 1 left off, as it should. Sadness about a dead Dobby. Immediately, thanks to a goblin, they decide to go to the ultra secure bank. Which one? The only one that exists, as far as the universe is concerned. It ends up going wrong, and thanks to the powers of Hermione’s cleavage (don’t click that link) they do they not splatter.

Find a Horocrux. Lose sword. A whole bunch of gold objects get duplicated? Seems like a great way to make bank (in a bank!). They tame a dragon, and escape, and then they undress again. 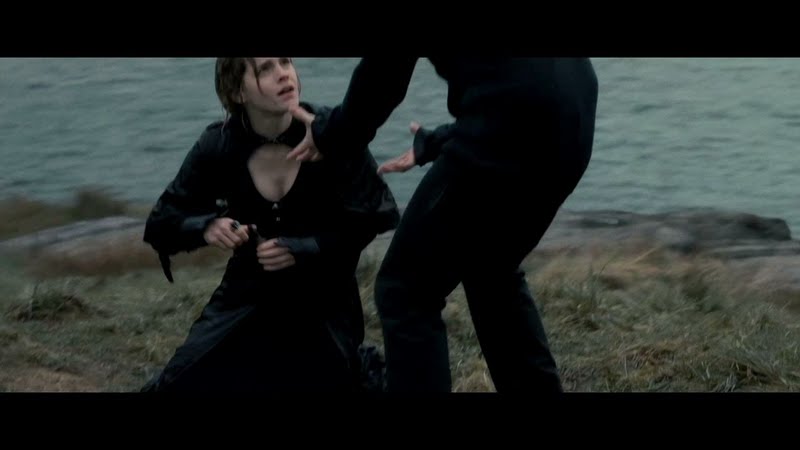 Guys. They are all legal now I guess. They want you to know this.

Some random scenes later and HEY THEY ARE BACK AT HOGWARTS. Another horocrux is there, but where? Oh man, Death Eaters. They have an hour to make defenses and find the object. Unfortunately during this time, it seems like all Harry is doing is taking his time to stare out of his window and talk to Luna, or slowly talk to ghosts. No real hurry in his eyes. But who has Hurry? Every other student in Hogwarts. It seems like (until the stand off is called), there are students just running. Running everywhere. They never get to where they are going, I assume. Because all you see in the background is people running places, and yeah.

“Ball? Wheres the ball? I’M LOOKING FOR A BALL WHERE IS IT!!!?” – Me imagining all the students as dogs.

So Harry finds it in the obvious place to look. He also saves the Nazi kid. Then there is a scene with fire reminiscent of the famous Mummy 2 scenes. But you know, fire, not dust.

Blah blah blah. SNAPE DIES. And apparently he was trying to help all along. To the snake. Let me tell you about the Snake. The snake is in this movie for one reason. To make 3D worth it. It seems like every scene involving the snake is it “coming at you”, more or less, which looks probably cool in 3D, but without it, just annoying as shit. 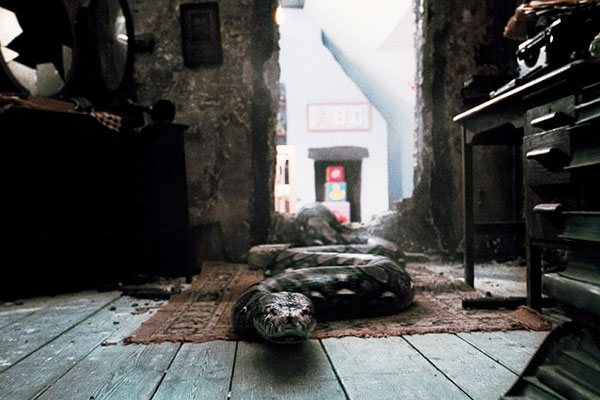 To be fair, this has been true in all the movies. A cheap ploy.

Blah blah. Standoff. Harry realizes the snake is the last horocrux. JUST KIDDING. Harry is too. Accidentally. So Harry has to die for Voldemorte to die. So he does that. After some ghost talk. But he does have a resurrection stone on him? So I guess it doesn’t matter. He still has a nice trippy scene with Dumbledore in a very white train station. But hey, he comes back into action after Neville gives a sweet speech and busts out the sword. He does it stupidly though, and does it many feet away from the snake. If he took a few more steps, we could have had a dead snake, and less dumb CGI 3D Lunging action.

During all this, Harry and balddude have their duel. Turns out a wand doens’t belong to balddude, it leaves his grip, and immediately he turns to dust. Like. What? Harry didn’t even hit him with anything, just removed his wand, and bam, dead time. Weird, since he only had that specific wand these last few movies. Must be because all the horocruxes died? I guess?

Anyways, they die, so good conquers evil. Harry presumably lives a normal life, where he has multiple children, and his second child is all nervous about going through a makeshift wall, even though he obviously did it when he went to the train station with his older brother (just how like his younger sister is doing it then) hey long sentence how are you doing.

Also in the epilogue you will see that time was not good to the nazi boy.

Overall, this movie had good special effects. Mostly. The escape from the hidden room on brooms looked like it had pretty shitty effects. Obviously just people hanging out in front of a green screen, feeling (even if it wasn’t). It also had a lot of questionable scenes for a “holy shit we are all going to die”, like Harry not running to his destinations in the castle. Or too many kids running (when they are all supposed to be either in one hiding spot or helping. Not just running). Or dumb CGI snakes. I feel like Part 1 and Part 2 had a lot of filler, which was annoying as they were both over 2 hours.

I think Part 1 and Part 2 could have easily been just one movie, but turning a last book into two movies seems to be a popular money grab.

Oh well. Maybe they will cut out the crap, and just give me one movie in the next reboot.