Fruitvale Station is the true story of the last day of Oscar Grant’s life in 2009. Who is Oscar Grant and why should you care?

This Wikipedia article sums it all up nice and…well in great fucking detail. So much detail. Not an easy read at all.

Basically in an arrest, police officers were being rougher than usual early on New Year’s Day. One of the officer ended up firing a shot into the back of Oscar, killing him later. Thanks to technology, a lot of videos quickly surfaced on the internet, and brought the case to the national spotlight. Then, you know, this movie. 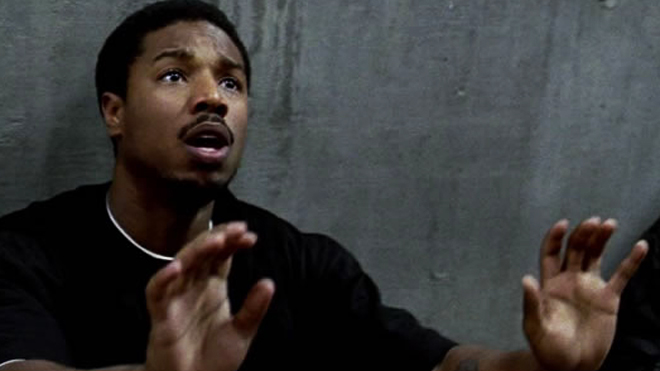 SPOILER. Someone dies in this movie.
Side note, this movie is hard to explain. You know what happens at the ending. Hell, if you didn’t read this review, you know how it ends? Why? Because this is how it starts:

Actual footage of Oscar Grant at the Fruitvale train station. One of the cell phone cams, about a minute long, a brief altercation, and the shot. Then the movie starts.

This is a pseudo-fictionalized last day for Oscar (Michael B. Jordan). December 31st also happens to be his mother’s (Octavia Spencer) birthday, so a lot of the day is prepping for dinner at her house and then plans in the city for midnight.

He recently lost his job as a butcher, and has gotten back into dealing drugs, but he wants to turn his life around. He has been in prison twice before, but just got out again a few months ago. He has a daughter, with his long term girlfriend Sophina (Melonie Diaz). He has a big family and a nice support network.

Shit, what else do I say? I don’t. He had a rough life, then he got shot. Kevin Durand also made a surprise small appearance as a cop. Not the asshole cop, just one of them. 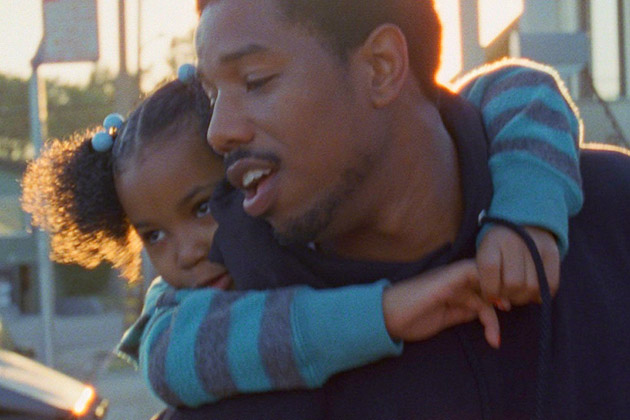 Plenty of imagery to make sure you got the full emotions out of it too.
Some movies are just hard to describe, for sure. And after all, with a movie like this one where you KNOW how it ends, the experience is the entire point. But what kind of point was it trying to make?

Anytime someone dies, it is a tragedy. The death is worse if the age is low (he was 22) and the circumstances unjust (shot in the back during an arrest) and even worsier if it has authority overstepping their bounds. The timing of this movie couldn’t be better, with a different famous death just finishing its trial, with the George Zimmerman / Treyvon Martin case.

This only feels relevant because it is a movie distributed by The Weinstein Company, who are well known for advertising. Aka, the best money spent on advertising is free advertising. Just look at their Bully nonsense.

So I think it is unethical to release this movie around that trial for more money and exposure, but I think the movie itself is worthy of being made on its own merits. I don’t like lumping the two things, because the situations are very very different. I won’t get political, I will end it there.

The movie itself is VERY well acted, especially Michael B. Jordan. Everyone else is fine, but he is the only character basically on the screen 100%. The middle of the film had its boring moments, but that was necessary for the buildup. I think it was strange for them to show the actual footage at the beginning. It really took a lot out for me, since they recreated it at the end of the movie anyways. It seems like it could have been better incorporated somehow. Random scenes had extreme elements of shaky cam, just from walking through a room, or a quick run down a street. Those were annoying, not helpful.

I hope some of the smaller details were actual events. They had nice graphics for every phone call and text he made, all of which are records that could easily be gathered, so it would be nifty if they were the actual texts and phone calls he made that day.

Good movie, sad ending, great acting, some dull parts and questionable advertising. Very excited for Michael B. Jordan to be in more movies, that is for sure, brah.